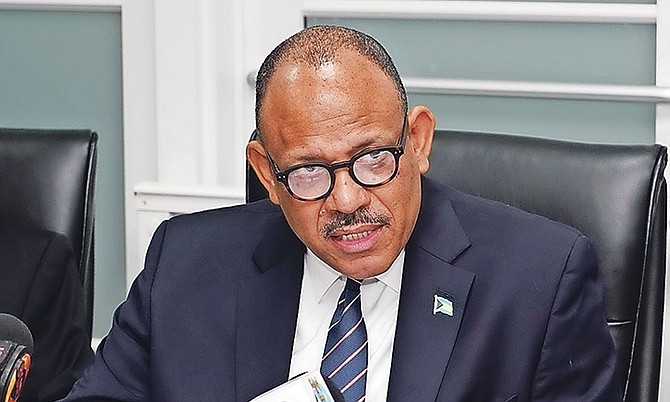 A PRIVATE plane carrying 14 people from China was denied entry to The Bahamas because of travel restrictions designed to fend off the fast-spreading coronavirus, which has killed more than 360 people.

This comes as Health Minister Dr Duane Sands told The Tribune that nine people have now been quarantined as part of the government’s policy of quarantining all returning residents who have visited China within the last 20 or so days.

Some of the quarantined residents are students studying in China.

Tourism Minister Dionisio D’Aguilar also said yesterday that the plane in question was among two denied entry, while a cruise ship experienced a delay disembarking its passengers because its paperwork was incomplete.

The Huoshenshan temporary field hospital under construction is seen as it nears completion in Wuhan in central China's Hubei Province, Sunday. (AP)

Dr Sands said one of the private planes, which attempted to enter the country on Friday, had passengers who were eligible to enter this country and others who were not. “They were given that information and they chose to fly on to another destination,” he said.

The Miami Herald reported that the flight originated in Dubai, landed in the Dominican Republic after attempting to enter the Bahamas — its original destination —and then flew to Port-au-Prince, Haiti after being denied. Once in Haiti, everyone on board was kept on the plane because of the health risk. The Herald reported that the plane was expected to depart Haiti for Portugal early Saturday morning.

Dr Sands said: “The position of the Bahamas is if you’ve been in mainland China the last 20 days, you’re not going to be allowed entry. With this plane, they could’ve landed here but not everyone could’ve gotten off the plane. Those that couldn’t land here would’ve landed, they would’ve been seen by immigration and then be denied entry.”

The process of implementing travel restrictions is extensive, Dr Sands said, noting that the Ministry of Tourism communicated with airlines and cruise ships about the policy, as did the Ministry of Foreign Affairs.

“It is a huge logistic operation because you have to give people notice. It requires the involvement of foreign affairs, the Ministries of Tourism, Aviation, Immigration (and) Finance. It is a very, very extensive, organised, coordinated operation. The entire world is going through this right now. Subsequent to us declaring our positions, multiple countries have done the same thing, including Grenada, Jamaica and the United States,” Dr Sands said.

For his part, Mr D’Aguilar said the government’s travel restriction would have been quickly known and accessible to airlines via various platforms.

“The onus is on the carrier,” he said, “whether it’s a cruise company or plane, to vet that customer and ensure they don’t violate this new regulation of the Bahamas. We get very very few travelers directly from China, everyone has to go through a country to get here, so inevitably other countries are throwing up barriers to prevent persons who may have come from the affected area or from China as well and would’ve vetted them along the way. We’re lucky in that sense that they have to fulfill the requirements of an intermediary country and most countries right now are taking a fairly hard stance about people originating or have been in China the last 14 days. We have been stricter in insisting on 20 days as opposed to 14 days.”

He continued: “The planes that attempted to enter this country did so right on the cusp of when we made the announcement so it probably didn’t filter out in its entirety to those in the private aviation industry but I’m sure by now it is well known.”

On Thursday, health officials announced that non-residents who visited China within the previous 20 days would be denied entry regardless of their nationality and returning residents would be quarantined and monitored for symptoms during an incubation period of 14 days.

Officials on Sunday said a 44-year-old man in the Philippines became the first person to die from the virus outside of China. The man was a resident of Wuhan, China, the epicenter of the virus, and he died after developing severe pneumonia.

Chinese officials on Sunday reported the death toll from the disease to be 304 while the worldwide infection total is 14,557 according to Chinese and World Health Organisation data.

"Dr Sands said one of the private planes, which attempted to enter the country on Friday, had passengers who were eligible to enter this country and others who were not. “They were given that information and they chose to fly on to another destination,” he said.

If one passenger on that plane is suspected of having been potentially exposed then by virtue of them sharing the same enclosed space on a plane they are all automatically suspicious, but Sands should know this!

Subsequent to us declaring our positions, multiple countries have done the same thing, including ........ the United States,” Dr Sands said.

Here you can see the blatant deceitfulness of Sands. He would have us believe the Bahamas has been more proactive than even the U.S. in responding to the grave threat posed by the spread of the Coronavirus. Nothing could be further from the truth. Moreover, Sands wants us to believe that self-monitoring by persons likely to have been exposed to the Coronavirus is an adequate quarantine procedure. LMAO

What about the 10,000 cruise ship visitors everyday?