Insight: Setting Sail To Raise The Alarm On Climate Change 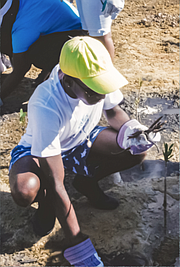 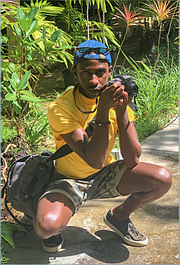 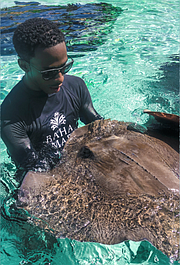 Bahamian biologist O’neil Leadon is set to sail across the Atlantic and embark on a tour through Europe to participate in the United Nations Climate Change Conference (SB52).

In January, Mr Leadon was selected to participate in the Sail For Climate Action (SFCA), a sailing expedition launched to give young people from Europe, Latin America and the Caribbean a platform to raise climate change awareness and “contribute to local, regional and global climate solutions.”

As the only Bahamian selected to take part in the transatlantic journey, Mr Leadon will be tasked with “speaking on behalf of the country” on the effects of climate change as it relates to “hurricanes, ocean acidification, coastal and marine habitat loss, coral reef loss and marine species protection.”

But before he can make the “once in a lifetime” trip and represent the country on a global stage, Mr Leadon needs the public’s help to aid him on his venture.

“Bahamian people should sponsor me in this initiative because the way they say, ‘Tourism is everybody’s business,’ well so is climate change,” Mr Leadon told Tribune Insight.

“When the hurricane came we were not all in Abaco or Grand Bahama, but we all had family members, friends, loved ones and colleagues that were affected.

“I remember personally I reached out to the Head Knowles Foundation to volunteer with their relief efforts. Just to see the outpouring of love and support from the general public shows me that this trip is something worth investing in. This is something that people care about.”

Mr Leadon said while this achievement is a personal milestone for him, the opportunity is also a representation of so much more.

“This is a culmination of hard work, dedication to our nation’s natural environment and a commitment to increasing national awareness of climate change and negative environmental impacts,” he said.

“This journey will serve to show younger generations of Bahamians that education is truly our passport to experiencing and influencing the world around us.”

Mr Leadon insisted that the tour would be a “major publicity moment” for the Bahamas because it was an opportunity to let other nations know that the country is “still accepting visitors post Hurricane Dorian”.

“The main idea behind me wanting to apply for the SFCA was just to give us a break in the public sphere scene because many times people think about the Bahamas they only think about New Providence,” he said.

“When Hurricane Dorian occurred, lots of people thought that we were actually decimated to the point that we weren’t actually accepting visitors. A part of my platform would be to let individuals know that our shores are still welcoming visitors and that we have a lot more to offer than the capital.”

Mr Leadon said the SFCA is the perfect opportunity to show the world how resilient the country actually is.

“Following the widespread devastation of Hurricane Dorian on Grand Bahama Island and the Abacos, this tour serves as an opportunity to tell the stories of the Bahamian people,” he said.

“These stories of survival, heroism, camaraderie, restoration and national pride will show the world that we are still here, still rebuilding and still ‘One people united in love and service’.”

Mr Leadon added the SFCA could serve as a “catalyst to strengthen bonds” between the country and its international neighbours and create the “opportunity for future collaborations” between Bahamian youth and the young people of the other countries involved.

“The estimated budget for Sail For Climate Action is $7,653.69 per participant and covers all aspect of this journey including travel, accommodations, travel insurance and additional expenses,” he told Tribune Insight

“Any assistance in this regard would be immensely appreciated and goes a long way towards the environmental advancement of The Bahamas. Often times we care about things too late and I think this is an opportunity for us to get a running start.”

The SFCA aims to “raise Latin American and Caribbean voices in international decision-making processes and to strengthen bonds among the participants across the Atlantic Ocean.”

The tour will take place aboard the Regina Maris which is scheduled to depart from Cartagena, Colombia on February 20 and will make stops in Jamaica, Bermuda, Azores, France, and the Netherlands before sailing to Germany for the UN conference.

“Being sponsored for this journey would mark a personal milestone in my life. I know that all great achievements require time and I am no stranger to hard work,” Mr Leadon told Tribune Insight.

“I believe that my participation in this tour will yield amazing benefits for my career and for our great Bahamaland.

“As I share our stories to connect our region and discuss (and) create sustainable solutions to climate change, I do not take for granted the sacrifices and efforts of our countrymen and women in this fight.

“I plan to represent the Bahamas with integrity, speak on our behalf with poise and eloquence and remind the world that it truly is better in the Bahamas.”

You should not have to ask for money. PM Minnis should have already called you by now, to offer to pay for your trip entirely. This is a paltry sum compared to the waste by this government in courting much less worthy causes and the salaries for our do-nothing MPs.