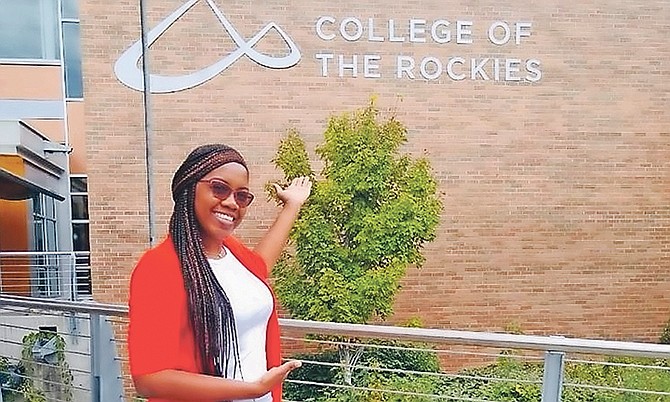 Edwinique Culmer on the College of the Rockies campus in Cranbrook, British Columbia, Canada.

“When I came to BTVI, I never once imagined that this would’ve been the gateway God used to let my desires come to fruition.”

These were the words of Edwinique Culmer, a Human Resources Management major at the Bahamas Technical and Vocational Institute (BTVI), who recently had the opportunity to study at the College of the Rockies in Cranbrook, British Columbia, in Canada. Since visiting Canada in 2017, Edwinique has always dreamed of returning. She had a strong desire to attend school there and experience what Canada had to offer; BTVI made her dream come true.

Edwinique was one of six BTVI students who were recently afforded exchange programme scholarships – thanks to the Emerging Leaders in Americas Programme (ELAP). When she received the news, she cried tears of joy. She could not believe that a dream she once had was now a reality.

During her four months at the College of the Rockies, Edwinique’s desire for education increased. Being surrounded by so many nationalities and cultures with strong beliefs in education encouraged her to raise the bar for herself.

“This experience forced me to switch my lens and look at education in an entirely new light. After interacting with international students who were so hungry and dedicated to educating themselves. I immediately caught the vision and obtained a deeper appreciation for education and the importance of ensuring that you are prepared for the future,” said Edwinique, who is now more determined than ever to accomplish her goals.

Edwinique’s favourite parts of her experience in Canada were the wealth of knowledge she received from her lecturers, creating memories with her host family at dinner every night, and the many friends she made from all over the world. She credits BTVI with adequately preparing her and making it easy to adapt in her classes while in Canada.

In the past 10 years, 30 BTVI students have been sent to colleges abroad on ELAP scholarships. The scholarships, granted by the Canadian government, provide Latin America and Caribbean students with short-term exchange opportunities at the undergraduate and graduate levels. The exchange, which began in 2009, requires students to return to BTVI to complete their studies following the exchange.

This experience, said Edwinique, has taught her that nothing is impossible. She is slated to graduate from BTVI with an Associate of Applied Science degree in Human Resources Management in May 2021.