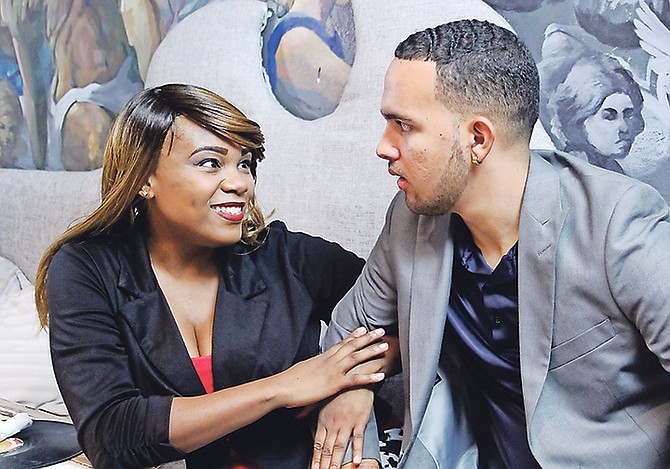 A scene from 'Foxy Ladies'.

A battle of the sexes is brewing in a new Bahamian film set to premiere this Valentine’s Day.

“Foxy Ladies” takes a romantic and comedic look at the struggle for control in relationships. This is the third movie produced by the partnership of Bright Light Arts and Vision Pictures. It follows the family drama “Fresh” and the romantic comedy “Crazy Love”.

“We have had a tremendous response to our work over the years, and we are hoping for more of the same with ‘Foxy Ladies’,” said Clarence Rolle of Bright Light Arts. “If audiences liked ‘Crazy Love’, they will love ‘Foxy Ladies’ because it follows our model of bringing a sophisticated comedy that features characters that people will get emotionally invested in.”

Mr Rolle said he and his team always aim to focus on important issues that are prevalent in Bahamian communities. Whether the film is a drama or comedy, there is always a moral message that he hopes makes audience members’ lives just a little better.

“Foxy Ladies” follows the adventures of a modern woman who refuses to be controlled by men. When she ends up in the company of women who want more control in their relationships, she sets about to make them as confident and influential over men as she is. The only problem is, the men of these women have other ideas.

“I suppose it is a theme that is as old as marriage or dating,” he said. “For all of time there has been this desire by men and women to be in control of a relationship, to be the one who is calling the shots. Unfortunately, the battle often leads to abuse or manipulation. Our film is a comedy, and we expect a lot of laughter. But in the end we want people to be inspired to be considerate in relationships, and to treat their loved ones with the respect they deserve.”

The film runs an hour and 20 minutes. It will premiere at 6pm on February 14 at the University of The Bahamas’ Performing Arts Centre. A second screening will be held at 7.30pm on the same day.

“Foxy Ladies” stars Tara Woodside as the headstrong protagonist, Tanya. She is joined by Leslie Ellis-Tynes, the star of “Crazy Love”, and newcomer Clarence Knowles as the leading man.