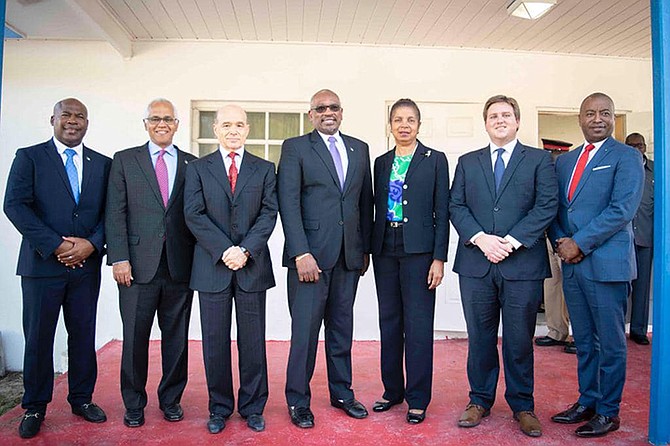 A HEADS of Agreement was officially signed yesterday between the government and Tyrsoz Family Holdings Ltd for a $300 million residential resort and marina in South Abaco, which will allow for the creation of 600 construction jobs on the island.

Noting yesterday’s signing as an “extraordinary day” for the people of Abaco, Prime Minister Dr Hubert Minnis said the move will play an essential role in the post-Dorian rebuilding efforts on the storm-impacted island.

“Among the best ways to help the Bahamas post-Dorian is for tourists to visit our islands, for second home-owners to rebuild and for Bahamian and international investors to invest in our economy,” he said during a ceremony on the island.

“To realise this potential and to restore Abaco, boutique properties such as this development are essential. This development represents one of the largest ever in Abaco, the country’s third largest economy.”

According to Dr Minnis, the development will include a marina, golf course, club house, up-market resort and a number of other amenities and will also allow for an expansion and upgrade to the Sandy Port airport.

“The project will be developed over two properties: the Lantern Head property and the South West property. Lantern Head is designed to be a private community inclusive of a hotel and golf course,” Dr Minnis continued. “It is anticipated that the Lantern Head property will encompass a boutique 50-room hotel with beachfront access, restaurants and guest amenities; 76 residential lots, inclusive of 66 beachfront lots and 10 hilltop lots, and an 18-hole full-size golf course with a driving range, full service club house, pro shop and other amenities.”

As it relates to the South West property, Dr Minnis added that contractors will develop the area into a “super-yacht marina”, encompassing two boutique hotels and a marina village.

“This portion of the development is expected to include: a 136-slip marina with slips up to 660 feet and all the necessary amenities; a marina village that will provide services to marina and hotel guests and residential homeowners, and offer shopping, dining experiences, bars and entertainment,” he said yesterday. “This development will also include: a 75-room luxury hotel located behind the marina; a small European style casino with approximately 5,000 square feet of gaming space, and; 90 lots, inclusive of 44 marina canal lots, 26 waterfront residential lots and 13 hill-top lots.”

Dr Minnis said the developer has also agreed to invest up to $1 million dollars for the restoration of the exterior and of the historical Hole-in-the-Wall Lighthouse and the surrounding area.

“This will include the restoration of the out-buildings, in cooperation with the Bahamas National Trust (BNT) and the Antiquities, Monuments and Museums Corporation (AMMC) to provide a small museum of the area and a shop featuring local artisans and craftspeople.”

“The restoration and operation of the lighthouse will be undertaken in partnership with the government of the Bahamas, the AMMC and the BNT.”

With 600 workers expected to be employed during the project’s construction phase, Dr Minnis said the ratio of Bahamian workers to foreign labourers will strive to be “no less” than 80 percent to 20 percent respectively.

“Tyrsoz has agreed to aim for a ratio no less than 80 percent Bahamian workers to 20 percent non-Bahamians workers,” he said.

“Tyrosz has also agreed to maximise the hiring of Bahamians for additional operational employment and promote entrepreneurial opportunities for Bahamians in the commercial aspects of the development.”

In an effort to assist Bahamian entrepreneurs on the island, the prime minister added that a business development fund will also be implemented in South Abaco.

“Seven million dollars will be made exclusively available for Bahamians entrepreneurs who are seeking to establish businesses in the project,” he said.

“The fund will assist Bahamian entrepreneurs in training and business development opportunities and will provide direct financial subsidies to support the businesses during the initial operational phase of the project.”

Speaking to reporters at yesterday’s signing, Tyrosz Development Manager Ra’anan “Ronnie” Ben-Zur said he could not give a definite timeline as to when the project will be completed. However, he noted it was possible that the resort will be opened in the next four to five years.

“I don’t have a fixed timeline. I’m working as fast as I can. We have to go through a long process and we still have (things) that we need to finalise, and we need to do a local town planning. So, it’s a lot of parameters that we still need to get,” he said. “We’re going to do everything by the book. This is going to be the best in class project and everything’s going to be done properly and by the book so whatever time it will take, it will take.

“I think we might be open within maybe four to five years…we’ve committed to the government for a minimum of $300 million. Our budget is much higher than that, so our plans goes way beyond that.”

While noting that he’s “eager” for the project to begin, Central and South Abaco MP MP James Albury said he looks forward to welcoming other investors who want to make Abaco “bigger, better and stronger” following Dorian.

“Even if it was not for the hurricane, this will be a significant development, but I think it’s even more so after the hurricane because it shows that investor confidence in Abaco is still there,” Mr Albury said.

“Despite the mass of tragedy, there’s still people who love our island and are investing a lot of money and capital to it and who want to support it and be a part of it,” he said.

“So, I think that will inspire others as well to highlight that we may have taken a blow, but Abaco is not going anywhere. We still have a lot to offer and I look forward to seeing in the future, other developers and other investors who are going to want to participate in the economy with us to make Abaco bigger, better and stronger.”

They can not get the Pointe Laborers right. So their 80% Bahamian and 20% foreign is just talk. cheap talk from the Masterful liars.

I hope Tyrsoz can recognize and distinguish between a Bahamian and a Haitian!