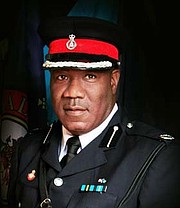 Commissioner Ferguson signed a letter saying the senior officer is to be deployed on a special assignment “to assist with the overall security concerns” of that ministry for an initial period of 12 months.

The appointment was to begin yesterday. ACP Deleveaux is awaiting details about the ministry’s concerns, according to his lawyer Wayne Munroe.

ACP Kendal Strachan and ACP Clayton Fernander have been directed to head security teams at juvenile schools and the Ministry of Health respectively. The officers see their appointments as demotions. ACP Strachan has sued the government.

ACP Fernander has declined to physically report to the ministry, saying the post would not require him to leave his desk. He is also awaiting a full report about the precise security problems at the Ministry of Health. Mr Munroe hopes that by demanding such details, he can show the officers are not so much responding to pressing needs but being sidelined and made to do jobs that have traditionally been the responsibility of much lower ranked officers.

“ACP Deleveaux called the minister to find out what is the calamity at the ministry that they have not been reporting as crimes and that they need him to address,” he said yesterday. “If they say there is a special assignment because there is a calamity of crimes that aren’t a part of the police statistics, I’ve instructed the officers to go find out what they are talking about so he contacted the ministry to arrange a meeting with the minister and guess what, the minister wasn’t available to meet with him (yesterday) and may not be available to meet with him (today).

“If the minister of education says, ‘look, I believe somebody is out to kill me, I believe raping and robbing are taking place rampantly throughout the ministry and every school,’ then you may find he tells the commissioner that to get a grasp of this problem he needs to be embedded in this ministry and take certain amount of officers with him. But nothing I can see rises to the level of calamity that requires the work of these high-ranking fellas when the country faces so many other crime issues.”

I wonder why these people are being phased out. Gee, read editorial on Peter Nygard and Bahamian shame in today's paper. Still wonder?