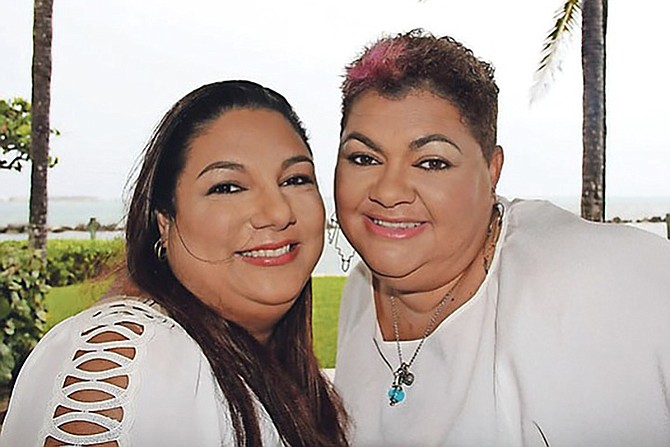 IN response to a lawsuit filed by the HeadKnowles Foundation that alleges she withheld Hurricane Dorian donations, Lia Head-Rigby maintained her complete innocence, saying her “hands are clean”.

When contacted by The Tribune, Mrs Head-Rigby, co-founder of the foundation, said she only learned of the lawsuit after an American news crew showed up at her house in Florida yesterday seeking comment.

She claims she was fully transparent and compliant with the law during the whole Hurricane Dorian fundraising process — during which the foundation raised more than $1m after the deadly storm — and may file a countersuit for defamation.

“None of it’s true,” Mrs Head-Rigby said about the lawsuit’s allegations. “Every dime I have accounted for and I have been cleared by the Florida State Department of Agriculture and Consumer Services, they’re the IRS of Florida. They actually hold all the receipts, which is why so many receipts are in the complaint.

“Gina (Knowles) wouldn’t have gotten them if I hadn’t sent them, right? I have sent everything I scan, as soon as it’s done I upload to a folder and they have full access to all that. So I’ve been in compliance since day one. And there’s just no way I am going to allow my name to go down these real serious rabbit holes.”

The lawsuit says that as of October 2019, the foundation's GoFundMe account had raised $1.5m. However, only a little more than a million dollars has been turned over to the Bahamian NGO, the lawsuit alleges. More than $400,000 is in dispute.

Yesterday, Mrs Head-Rigby confirmed that she sent the HeadKnowles Foundation more than $1 million. She said any money that she did not turn over was used for an “operations budget” as she needed funds to pay for logistics and transport of donated materials.

“My hands are clean. I’m just so disappointed in Gina and this hunt for money that she’s always known where it is,” Mrs Head-Rigby said. “We sent over a $1 million that was frozen by Ministry of Finance, the other money that she asked to be frozen for the GoFundMe that we pay because she said they were taking too long and they wanted to know where the money was.

“Everything was sent and the monies that I kept on this end for the operation budget. . .you know, as a Bahamian slash American over here, I am fundraising. There’s nobody I can call here like in Nassau. . .we had quite a few volunteers for a week and that was that.

“I couldn’t send the relief if I didn’t have money to send it down. You can’t ask America to do for free, Americans ain’t doing nothing for free. So I spent money on mostly transportation for shipping via plane, via boat, via FedEx once and we paid taxes. . .and Gina knew about it.”

Last September, Mrs Head-Rigby revealed she was stepping back from the foundation “with a heavy heart”. At the time, she said she was “disheartened by certain measures to defame my name and reputation as a Bahamian whose only goal has been to assist those devastated from natural disasters.”

Yesterday, she told The Tribune the split came after the $1m she sent to the HeadKnowles Foundation was allegedly deposited in a Bahamian bank account that had her name on it, but to which she was not a signatory. She claimed she was not consulted about this.

According to the lawsuit, Ms Knowles and Mrs Head-Rigby knew each other for some 20 years before working together on disaster relief in 2015. Yesterday, Mrs Head-Rigby said she still loves her former colleague, in spite of the allegations.

“We did love each other,” she said. “I still love Gina. . .my hands are clean and it will come out in the end.”

GINA Knowles, a co-founder of the HeadKnowles Foundation, has sued her former partner Lia Head-Rigby and her husband, accusing them of using GoFundMe funds for personal use while violating a mandate to send all the donations to The Bahamas.

The lawsuit, filed in Florida on Monday, claims Mrs Head-Rigby went from being on the brink of poverty to living like the “rich and famous” at the expense of the Hurricane Dorian victims she vowed to help.

The plaintiff, HeadKnowles, wants a judgement declaring its organisation the rightful and beneficial owner of the GoFundMe (GFM) funds raised as well as other relief determined to be just or necessary.

Mrs Head-Rigby allegedly "perjured herself" by using invalid Bahamian documents to start the GoFundMe campaign on September 5, 2019. The lawsuit says the documents, a memorandum of association for the HeadKnowles Foundation, were dated March 20, 2018 and were never approved by the Bahamian government. “Head knew (this) and intentionally misrepresented their validity to GFM in order to begin the campaign,” it claims.

While the agreement she signed required she transfer funds raised to HeadKnowles in the Bahamas, the lawsuit alleges: “Head did not transfer all of the funds to the plaintiff as she attested that she would. She perjured herself. Head converted funds and used them for her own purposes in violation of the attestation. Head's scheme after Hurricane Dorian struck the Bahamas was to use the good name of the plaintiff and the empathy that would be evoked for the people for The Bahamas, in order to raise funds through GFM and ultimately help herself to those funds that she stated were intended to go to Bahamian victims.”

The GFM campaign raised about $1.5 million before it was closed. The funds were transferred from GFM to a personal Bank of America (BoA) account accessed by the women.

At first, in accordance with the GFM agreement, Mrs Head-Rigby transferred $ 737,070 from the BoA account to a Royal Bank of Canada account in The Bahamas which both women could access, according to the lawsuit. That account, HEADKNOWLES Limited, was initially used in 2015 to accumulate funds raised for Hurricane Joaquin victims simultaneously with the establishment of a not-for profit corporation, HK Limited Company. Although that not-for profit organisation became invalid in 2016 because annual filings were not made to the government, the lawsuit says the RBC account continued to accumulate funds for disaster relief efforts.

After sending GFM money to the RBC account, Mrs Head-Rigby allegedly began making “inappropriate withdrawals” from that account and to avoid detection by GFM or US bank authorities, she allegedly withdrew money from the RBC account rather than the BoA account, the lawsuit alleges.

Two withdrawals of $1,000 from the RBC account are highlighted in the lawsuit as sources of controversy that eventually led to the break-up of the charity group.

When confronted about the withdrawals, Mrs Head-Rigby’s husband allegedly admitted in a WhatsApp chat that $1,000 was taken to pay for gas and groceries for his family and that the other was used by his wife for petty cash.

“Later on in the WhatsApp conversation, Head herself joins the conversation and realises that her husband, Rigby, admitted that she inappropriately took funds from the GFM campaign,” the lawsuit alleges. “The very next day, on September 16, 2019, Head issued a press release announcing to the Bahamian media that she is no longer affiliated with the plaintiff. Head did this because she realised she was caught taking funds and attempted to separate herself from the plaintiff. From the moment of Head’s press release announcing to the world that she was no longer associated with plaintiff, Head stopped remitting funds to the plaintiff in violation of her execution attestation to GFM.”

After separating herself from HeadKnowles, Mrs Head-Rigby allegedly began paying herself $120,000 per year from crowdsourced funds in September 2019, despite being unemployed just weeks earlier, the suit claims. That same month, the Florida Department of Agriculture is said to have began asking her about the GFM campaign to see if she was complying with Florida law.

In an interview with The Tribune yesterday, Mrs Head-Rigby denied she was paying herself such a salary.

Mrs Head-Rigby said: “We were trying to rent this house for a family and it was right down the road and the lady from the American company, the realty company, she said just write a letter, put a letter to say that you are the foundation and you are working. . .so I did that, it looks good. . .it’s a job letter for Italia Head-Rigby. . .and I put that the salary was $120,000 — there is no $120,000 salary. That’s the only transgression I did, but (I did that) to get those families from Abaco and Grand Bahama a house and I’d do it again.”

“These values correlate to the amounts raised through the GFM campaign outlined,” the document says. “At the date of her application to the department, Head was telling the State of Florida, through her attorney, who stated the application was ‘true and accurate,’ that her new entity had received and spent approximately $1,046,220.

“In fact, what happened was that Head, after her press release on September 16, 2019, and after living on the brink of poverty with a personal bank account balance of $93.79, found herself in control of a sum of money she had never seen before and seized the opportunity to commence a lifestyle of the ‘rich and famous,’ and separate herself from the rightful possessor of those funds, the plaintiff and most importantly, the Bahamian victims of Hurricane Dorian. Head’s scheming, misrepresentations…to the plaintiff, GFM and the State of Florida is breathtaking. Her conduct, in terms of brazen disregard for the law, rivals that of Bernie Madoff and Scott Rothstein.”