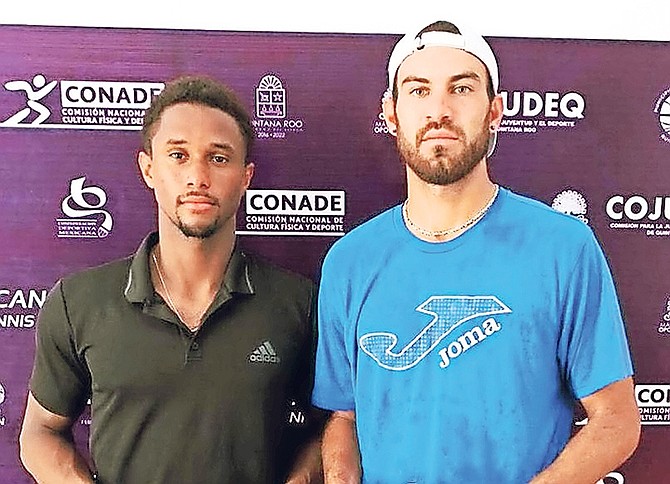 JUSTIN Roberts may have been eliminated in singles, but he’s hoping that he and his partner Herbert Jody Maginley from Antigua can secure a men’s doubles title before they leave Mexico this weekend after playing on the ITF World Tennis Tour Circuit.

The duo, who had a successful year in 2019, failed to get into the final of their previous two outings on this trip in Mexico. However, they are now into the men’s doubles semi-final after beating the duo of Felipe Sarrasague from Argentina and Kiranpal Paannu from New Zealand in two straight sets, 6-3, 7-5, in their quarter-final match yesterday at the M15 event in Cancun, Mexico.

“It was good. It was a clean match. I think we had one break per set. I thought that we served well and we were pretty steady on our return game,” Roberts said. “We took the match to them and we won. It was a good match for us today.”

Roberts and Maginley, training partners in Texas, played together all last year and they even won a title as a team. If they can continue with the intensity that they have played with so far in this tournament, Roberts feels they have the ability to capture the title.

“Our chances are great,” he said. “It’s always a chance. We are playing well and we are a good serving team. Nobody in the tournament wants to play us. We are a great serving team.”

After losing in the quarter-final round to the eventual winners in their first tournament in Mexico two weeks ago, Roberts and Maginley hit a rough spot last week, getting ousted in the first round by the champions. Roberts is hoping that the third time will be the charm.

“Hopefully it will go our way,” said Roberts as they prepare to take on the team of Igor Ribeiro from Brazil and John Daly from Australia today in the semis.

While he’s still having some success in doubles, Roberts got ousted by the No.5 seed on Tuesday in which he claimed was a good match to win.

“I think I played better than I played last week when I made the semis, so it was good for my progress. I’m playing better and better as I go along,” he said. “You never want to lose, but I feel that my game is improving, so hopefully I can turn it into more wins later on.”

Once he’s done in Mexico this week, Roberts will head to Texas for a week of training before he plays in a series of tournaments in the West Coast in the United States in California.

“I feel good. I haven’t played a tournament in a few months before I came here,” Robert said. “I thought each win I played better. I had a couple of big wins. I had some tough losses, but I can’t worry about it. I just have to get better every week and I think I’m doing that.”

Roberts, however, said he’s eagerly looking forward to adorning the Bahamian colours and representing the Bahamas on the men’s Davis Cup team whenever the American Zone III tie is set. He was automatically named to the team in December as he has the highest ranking of any Bahamian player on the professional circuit.