Etienne fast becoming the next Bahamian high jumper to watch 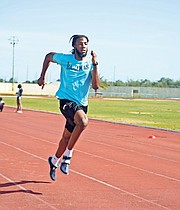 JYLES Etienne is fast becoming the next Bahamian male high jumper to watch.

He's coming off the Big Ten Athlete of the Week after the Indiana University's junior posted a personal best and meet record of 2.23 metres or 7-feet, 3 3/4-inches at the Hoosier Open in Bloomington, Indiana on December 13 before coming home for the Christmas holiday.

"I have had a good start to the indoor season and I hope that I can continue that when I go back in January," said the soft speaking Etienne during a training session at the Thomas A Robinson Track and Field Stadium under the tutelage of coach James Rolle.

"I am expecting some big things when I go back. I've had some good sessions with my coach, so I think I will be ready for the season ahead of me."

Having produced his lifetime best indoors with his third consecutive victory in the meet, Etienne's performance has pushed him on top of the ranking in the nation ahead of Tiffin University's Cameron Burrows who cleared 2.20m (7' 2-1/2") on December 6.

But when he returns to Indiana on Saturday, Etienne will compete in his first indoor meet for 2020 for the Hoosiers on Saturday, January 11 in an Indiana vs. Tennessee dual meet inside the Gladstein Fieldhouse facility on Indiana's campus in Bloomington.

"Right now my goal is the Olympics," said Etienne, who will need to jump at least 2.33 metres or 7-feet, 7 3/4-inches in order to be eligible to represent the Bahamas July 24 to August 9 for the Olympic Games in Tokyo, Japan.

"I just have to stay healthy and work on some little technical issues and I should be able to do it."

Etienne is coming off a freshman year at Indiana where he was third in the high jump at the Indiana Relays after clearing a height of 2.04m (6-81/2) on the first attempt.

During the outdoor season, Etienne competed at the Big Ten Championships in the high jump, placed eighth at the Tennessee Relays with a height of 2.07m (6-91/2) and had a top-10 finish after clearing 2.06m (6-9) at the Florida Relays.

Before enrolling at Indiana, Etienne also competed for the Stony Brook High School in New York in the high jump where he emerged as the New York State champion and was second at the New Balance Outdoor Nationals in 2016 and fourth in 2017.

He also represented the Bahamas at the CARIFTA Games where he soared to a bronze medal in the under-20 boys' high jump.

Now that he's making his mark on the collegiate circuit, Etienne is preparing to move to the next level to compete for the Bahamas on the senior international scene.

Etienne, at 6-foot-10, would love to add the Big Ten title both indoors and outdoors to his résumé and if possible go on and win the NCAA National Championship titles or at least become All-American as a finalist.