Stateside: Biden Scares Trump And He May Be Right To Do So 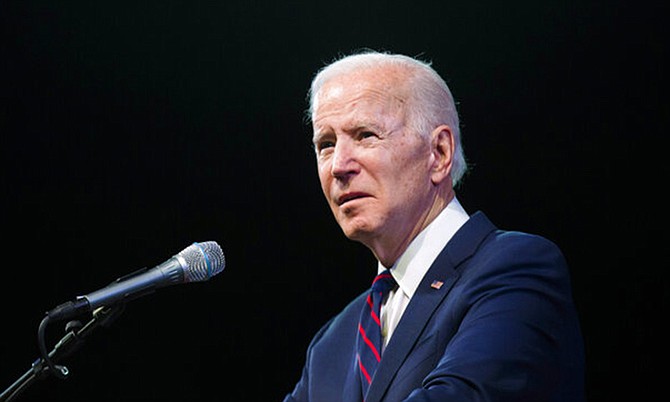 With everything that’s going on in Washington DC these days, a couple of old aphorisms come to mind. The first one is “where there’s smoke, there’s fire”. Right now, there is so much smoke billowing around Donald Trump’s presidency that it almost obscures the tragic conflagration that is engulfing Australia and its climate-denying prime minister. Literally every day, something new emerges about Trump’s efforts to cheat his way to another term in office.

The second aphorism is “there is no hell like a woman scorned”. Former American ambassador to Ukraine Marie Yovanovich - whose steady, inspiring and ultimately truly patriotic testimony before the House Intelligence Committee last fall led as much as anything to Trump’s current impeachment predicament - is back in the news again. It seems scuzzy Rudy Giuliani and his even seamier associates were dealing with crooked Ukrainian officials to barter for her ouster well before Trump finally decided to sack her.

It is rumoured that Yovanovich, now in temporary exile at Georgetown University, is preparing some memoirs. That should be a sensational book, if and when it appears.

But the headlines this week concern a second woman scorned. That’s Massachusetts Democratic Senator Elizabeth Warren. She and presidential rival Senator Bernie Sanders of Vermont had dinner at her house in late 2018. He may have said that a woman could not beat Trump this year. This information was leaked from the Warren camp, and Sanders has forcefully denied it.

It does seem entirely plausible that Sanders, whose own campaign has sometimes displayed tone-deafness toward women and minorities, said just that. And he may be absolutely right. But in the still rigidly politically-correct Democratic Party, that remark might be enough to finally dismiss Sanders, whose hoarse Brooklyn-accented hectoring is now officially tiresome, from the race.

Joe Biden, positioned on the debate stage between the two leftist contestants, looked on benignly. People now watch Biden for signs of senescence. They seem to be there. He occasionally closes his eyes in searching for the right word, sometimes fumbling a line or two. But there are several things to remember about Biden.

He is still running ahead in most polls. He is still obviously the opponent Trump fears most and Trump is pretty smart about these political things. And probably for the first time in his three presidential runs, the nomination is sitting there for Biden. Everyone is looking at him. But some think he isn’t mentally flailing. He’s just who he has always been – a garrulous, back-slapping politician whose verbal gaffes are endearing to most voters beyond the Washington Beltway.

And Biden might also be someone who could return America to some kind of calm political normalcy, for the first time since the end of the George H W Bush presidency 27 years ago. For the majority of polled Americans who yearn for comparative political peace and quiet, that just might be enough to propel Biden to the White House.

It was all white on the night

There were no ethnic or racial minority candidates on Tuesday’s debate stage. There were four white men and two white women. The prominent African American candidates have withdrawn. But the two remaining women made some noise and scored some points. At one point in the debate, likeable Minnesota Senator Amy Klobuchar noted that among the six participants, only she and Warren had never lost a political race. As the two women exchanged “you go, girl!” glances, there was a feeling the US is indeed moving toward electing a female chief executive in the near future.

Klobuchar, who represents a state Trump quietly almost stole from the Democrats in 2016 and where he has held rallies recently, is emerging as a solid potential addition to the 2020 Democratic ticket as Vice President. If she does well in the Iowa caucuses in a couple of weeks, speculation about her as a VP candidate should intensify.

After all, the US has already had a female VP, if only on HBO’s popular Veep series.

Chiefs and 49ers have the edge with home advantage

On Sunday, the two teams that will advance to play in the Super Bowl on February 2 in Miami will be identified. Both the NFC’s San Francisco 49ers and the AFC’s Kansas City Chiefs will be playing at home this weekend, and both are heavily favoured over their opponents. It’s hard to disagree with the oddsmakers, given how the teams arrived at their current positions.

The Chiefs’ victory over the Houston Texans was simply jaw-dropping. The Texans opened the game by moving out to an astonishing 24-point lead on a variety of big plays and unfathomable miscues by Kansas City. Watching the game on TV was a surreal experience, as the Chiefs fumbled kicks and uncharacteristically dropped several catchable passes from quarterback Pat Mahomes.

Then a big kickoff return ignited the Chiefs and they outscored Houston by 51-7 for the rest of the game. This match seemed like a video game at times. But it won’t be forgotten that ultra-talented Houston QB Deshaun Watson couldn’t stop the bleeding once KC got on a roll. It’s fair to wonder when Watson will advance to the next level in the playoffs.

Kansas City will host the Tennessee Titans on Sunday. The Titans are the wonder story of these playoffs. They have good offensive and defensive lines and a “game manager” at quarterback, but this team’s success is all about its 6’3”, 247-pound sledgehammer runner, Derrick Henry. Opposing teams have stacked their lineup to stop him but it hasn’t worked. The Titans simply whipped the top-seeded Baltimore Ravens last weekend, sending the losers and QB Lamar Jackson to their second first-round playoff home loss in a row. There will be valid questions now about both the Ravens’ coaches and their prodigiously talented quarterback.

Kansas City will likely fly into Sunday’s game on a carryover high from their epic comeback against Houston. Most see Tennessee as essentially one-dimensional with superman Henry. But the Titans will scare the Chiefs out of their socks, and might even upset them. Tennessee is a team built for the playoffs, and they are certainly peaking at the right time.

The 49ers earned a second straight weekend at home by dispatching the Minnesota Vikings, as San Francisco’s fearsome defensive line simply stopped the Viking offense. There’s been much talk about all the first-round draft picks on SF’s defensive front, and they all did play like stars. It never felt like the Vikings could really win this game.

On Sunday evening, the Green Bay Packers managed to build a lead and hold off Seattle to earn a trip to San Francisco. QB Russell Wilson and the Seahawks waited too long to really get into this game, and when they made it close at the end, Packers’ QB Aaron Rodgers made a couple of gutsy pass completions to seal his victory.

Rodgers has made a career of elevating the performances of largely anonymous offensive teammates, and is doing so again this year. He and his first-year head coach seem to be on the same page of the playbook most of the time, and the team’s defense has played well enough to keep them in almost every game. Every game, that is, except the one with the 49ers earlier this season.

In that game, the 49ers raced out to a 26-0 halftime lead on the way to a 37-8 thrashing of Green Bay. It’s hard to foresee an identical outcome this time, but the game might not be very close. Las Vegas oddsmakers have already installed San Francisco as the Super Bowl betting favourites.

I fondly remember the days when journalists were an objective, reliable source of news and not partisan hacks!