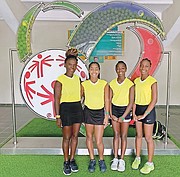 The Bahamas' three-member team's bid to get a high ranking in the International Tennis Federation's World Junior Tennis Tournament was thwarted after losing to the host Dominican Republic.

In the first round of the girls' main draw play in the North/Central America and Caribbean Pre-Qualifying Tournament, the Bahamas lost all three matches played against the Dominican Republic.

Sapphire Ferguson lost her singles 6-0, 6-2 to Maria Gell, Sierra Rodgers suffered a 6-4, 6-1 decision to Rosario Elmudesi and cousins Sapphire and Breann Ferguson went down 6-1, 6-3 to the duo of Elmudesi and Alexa Lerebours in doubles. 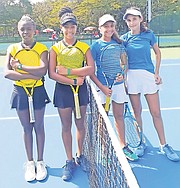 Cousins Breann and Sapphire Ferguson, left, with their opponents Alexa Lerebours and Rosario Elmudesi from the Dominican Republic.

"The girls played to the best of their abilities. We just played a very strong Dominican Republic team," Bain said.

"We had a chance to work with their number two player in a training camp two years ago and she has improved tremendously.

"She played number two of them and she was very strong out there today. Our number two player, Sierra Rodgers, also played very well. She should have won the first set, but didn't capitalise on it. She played well in the second set, but it wasn't enough. Sapphire also played very well in her singles, but it was tough out there for her too. Sapphire and Breann played doubles, but the Dominican Republic team was just too strong for us."

Bain said she's very pleased with the way the girls are playing and even though this will give them a chance to finish in the top eight, it will also help to prepare them for next year when they can contend for the top spot.

The players all indicated that they are all content with their performances so far. "I feel good about the way I played. I know I could have played better, but I gave it my best," she said. "I think as a team, we are also playing very well. We have some errors that we could correct, but we are doing our best."

Ferguson said she's looking forward to the rest of the tournament when she hopes that they will perform much better.

"I think I played as best as I could, but I think there is still more room for improvement," said Sapphire Ferguson. "Whether we win or lose, we just want to go out there and give it our best."

For Rodgers, who won't be eligible to compete on the team next year, she said she's enjoying the time spent with the players this year.

"Everybody is playing good and I expect some good things from the team."

The Bahamas is scheduled to take on Panama today as they try to stay in the top five ranking.

The team can end up no lower than eighth place out of a field of 14 countries that participated.