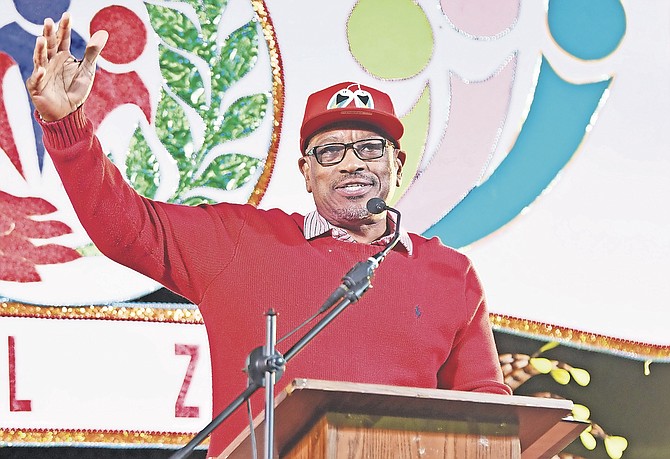 THE event billed as a town-hall meeting that launched the Free National Movement’s 2022 re-election campaign on Wednesday night was funded by the party, Chairman Carl Culmer told The Tribune.

The event was criticised by Progressive Liberal Party Leader Philip “Brave” Davis, who contended he had zero confidence that Prime Minister Dr Hubert Minnis had the decency to ensure it was paid for with party funds.

Mr Davis went on to accuse Dr Minnis of being intoxicated with abusing power.

Mr Culmer defended the event, describing it as the party finding new and innovative ways to share information with supporters and Bahamians at large.

He also said: “I don’t see what the false pretences were. The PM called a meeting. It was a meeting for the essential zones. We have four zones in our party: the central, east, west and south and we continue to have meetings in all those zones to inform our persons of what is going on.

“This is information sharing on what the government is doing and to give persons an opportunity to say what they’re doing in their constituency.”

Dr Minnis declared the event as the launch of the FNM’s “victory” train.

Asked if he thought it was too early to begin campaigning for 2022, Mr Culmer disagreed.

“The PM likes to taunt the Progressive Liberal Party. They will pick up on everything,” he said.

“The PLP have been campaigning from day one, even through the Hurricane (Dorian) they were campaigning while persons were trying to do good and trying to assist the victims of the hurricane.

“Mr Davis was out in Pinewood in a yellow jacket and PLP flag truck instead of going to save people. I see it as an opportunity to share information. If they want to call it campaigning then that’s up to them, but we need to find ways to improve communication so persons can understand what the government is doing rather than hearing one sided things coming from the PLP.”

The event was held on the grounds of the Edmund Moxey Youth and Community Centre. Elected representatives from the Bain and Grants Town, Mount Moriah, Fort Charlotte and St Barnabas constituencies spoke and attendees were intermittently entertained by Junkanoo groups.

No question and answer period was allowed.

However, Dr Minnis used his time addressing those gathered to castigate the PLP on its “politically expedient” position on marijuana decriminalisation and for its push-back on the single-use plastics ban.

Dr Minnis also said the PLP wanted to be re-elected to empty the treasury.

Yesterday in the latter of two press releases released by the former governing party, Mr Davis hit back saying PLP internal polls expressed “universal disdain” and condemnation for what transpired at the event.

He said: “Our internal polls reveal universal disdain and condemnation for what transpired with the prime minister last night.

“...The prime minister admitted that the meeting was the launch of his re-election political campaign.

“That meeting last night therefore must be paid for by the FNM party, not the Bahamian tax payer. We however have zero confidence that the prime minister has the decency or integrity to do so.

“His intoxication with and abuse of power coupled with his despotic mindset know no bounds and Bahamians everywhere now fully understand that they must remove him from office with the power of the ballot to bring an end to this madness.”

He continued: “As for the prime minister’s charge that the PLP wants to return to power to clean out the treasury, Bahamians everywhere could see that the FNM has already done that. Pray tell, what will be left when the PLP gets there?

Mr Davis said unlike the FNM, the PLP will implement initiatives to improve government revenue performance and use that revenue to bring relief and to uplift the lives of all Bahamians.

If is is a rally call it that. If it is a town hall for the FNM then call it that and take questions. Stop playing games. We need to really get serious. And Brave ain't no difference when carrying flag round of PLP and talking about walk about. If you want be serious, leave the cameras and entourage on walkabout and talk to people one on one. We still have too many jokey pretend leaders.

Alarming forced to admit that a thought be a PUBLIC 'town-hall meeting,' previously thought have been publicly funded, is now being BOLDLY described as a 100% funded new and innovative way to tell even more Imperialist lies to unsuspecting attendees at large. Can't write this, just, can't that lies were be so bold that they had be told from behind disguised faces. Didn't I nudge told ya, that masked gentleman's finger pointing mannerisms - sure as hell reminded me lot likes finger colony's PM?