Insight: Will Dr Minnis Still Be Driving The Fnm Train In 2022? 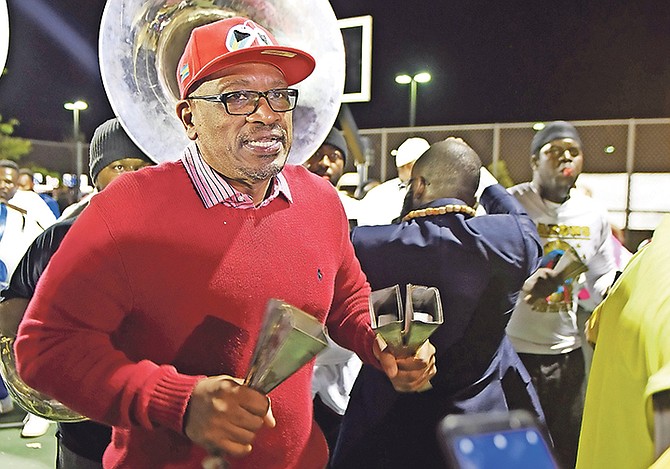 AFTER Dr Minnis opted not to take questions and instead participate in a junkanoo rushout, many were left angered at the audacity to stage a political rally under the guise of a town hall meeting. Photo: Shawn Hanna/Tribune Staff

WHEN the FNM were sworn in to become the next government of The Bahamas on May 11, 2017, many were convinced that we lived to witness, arguably, a retirement party for the country’s worst prime minister. Though it was done by an unlikely hero, it still made the way for Bahamians to be hopeful again. Two and a half years later, while the title of worst prime minister may still be in the grasp of his predecessor, Prime Minister Dr Hubert Minnis is failing to win many friends in the electorate.

Once a political figure we felt compassion for, today many feel he has become arrogant and tone-deaf to the cries of the people he perpetually tries to identify with – the poor and downtrodden. Dr Minnis often speaks of how his government is focused on improving conditions for Bahamians facing the hardest economic circumstances - yet many would contend far more harm has been done than good.

At last week’s “town hall”, Dr Minnis, donned in red garb, spent much of the evening touting the government’s record and slung mud at Opposition leader Philip “Brave” Davis and the PLP - all in efforts to excite his base. However, the talk of the town afterwards spoke to something that should be much more concerning for the party.

After opting not to take questions and instead participating in a junkanoo rushout, many were left angered at the audacity to stage a political rally under the guise of a town hall meeting. Beyond the denial of the opportunity to engage in dialogue with the prime minister, people also wondered if the taxpayer had paid for an FNM event - although FNM chairman Carl Culmer has since said the event was paid for by the party. Still, many were annoyed that the same prime minister who claimed he “would rather lose an election than a country” would dare talk about re-election when life has largely remained unchanged for many Bahamians under the current regime.

In fact, most people from the lower and middle classes of the country feel that things have become harder under this administration, which leaves us confused by the prime minister’s confidence in his ability to remain this country’s prime minister.

To overestimate the effect of Perry Christie’s shadow still having a negative effect on the PLP by 2022 may be a fatal mistake politically.

While Minnis may tout free tuition at UB and BTVI – laudable achievements for sure – with the economy still in poor shape, where will individuals graduating from these institutions be hired? And as for the nearly $1m the government has funnelled into the Over-the-Hill communities, why are we not hearing more positive stories on the ground? Certainly, this government would leverage such great opportunities for positive press, would it not?

Instead, we have no shortage of businesses in the Over-the-Hill community having little idea of how they are benefiting from a policy the prime minister holds so dear to his heart.

On top of that, the increase of VAT to 12 percent and the imminent BPL bill increase are sure to be ammunition for the PLP to attack the government. Even as murders have decreased, the Bahamian people don’t feel safer based on statistics alone. All that means is that, unlike the last two elections, crime will not be the primary issue – that has been usurped by the economy and escalating cost of living under the Minnis administration. And unfortunately for the FNM, a litany of campaign promises left on the party’s war room floor will no doubt resurface over the next two and a half years.

At some point, we must wonder if the party is going to end up losing confidence in the prime minister. Because, as it stands, Minnis faces a battle to convince the Bahamian people to give him another term. And let us not forget, he survived several challenges to remain the party’s leader.

With two and a half years to go until the next election, the prime minister should perhaps focus a bit more on what’s right in front of him rather than look ahead to distant elections.

The country has no shortage of problems and the prime minister’s priorities seem out of whack when his government is short on gains and full on unkept promises.

As a word of caution to the government - this isn’t your grandparent’s electorate.

Just as fast as we like our information, so too we like our results. We may allow you tarry a little while, but when you completely deviate from what you promised on the campaign trail and speak as if an election victory is owed to you, a rude awakening may be in order.

Potentially, to the prime minister’s detriment, members of his organisation are not blind to this. As the populace’s patience wears thin, we ought not be surprised to see how the tides of power might shift within the FNM.

The average Bahamian can not say that their lives are better under the FNM Government. is not that what a government should do, make life better for their people.

Mr: Christie did much good urban renewal. BAMSI . University of the Bahamas even carnival or a music festival is good.

What can you folks point to that Mr; Christie did that was so bad.. then check out doc a ship wreck. a destructive force towards the poor. Facts are facts.

I am amazed at how little any of them know about damn near anything. They know their political party systems well enough, enough to rise up the ranks, stepping on heads and jockeying for position, skills useless in Governance.Throwing muck at each other is their sport, first and last resort. Ethics seem in short supply. Compromise abounds. And the ever present sticky fingers. They take on the airs of Royalty, without the demeanor to suit. Humility goes out the window, replaced with arrogance. When they do consult, it is an insult, consulting with their same old tired roster of cronies, never looking outside of their entrenched closed loop buddy system.

Just looking at groups it seems that the Organized Mafia Crime Syndicate is much more better than a Political Syndicate even with many similar areas.

Says a lot about a comrade who when asked by a reporter, if PM wouldn't mind explaining, like , whats up with all the unstable flip flops, Doc responded, of course not, lets just say I'am driving Eastbound, then something upstairs tells me to turn around and head out West, that means I needs slow down to turn around. Can't just be saying stuff like this, you just, can't.

LTB is a total waste of space who talks the talk but can't walk the walk. As one of her former constituents and having seen first hand her brand of "representation" I'll take a raincheck.

If Dr. Minnis can pull off an improvement in the economy and also recovery of Grand Bahama and Abaco, I think he would be given a 2nd term. I do agree with Malcolm Strachan that he needs to focus on what is in front of him rather than on an election that is 2.5 years away. Not that the election is not important, but there are too many things that need fixing. They are still ways off from fixing the ills that plague Bahamian society.

The PM insults the people .in the poor communities. He feels that all he has to do is shake some cow bells and when it is his birthday go to those communities and cut a cake.

Then tell his "I was a poor boy story" Then jump in his chuffer driven car and speed away with police escort.

Because he feels the poor people do not know or deserve .