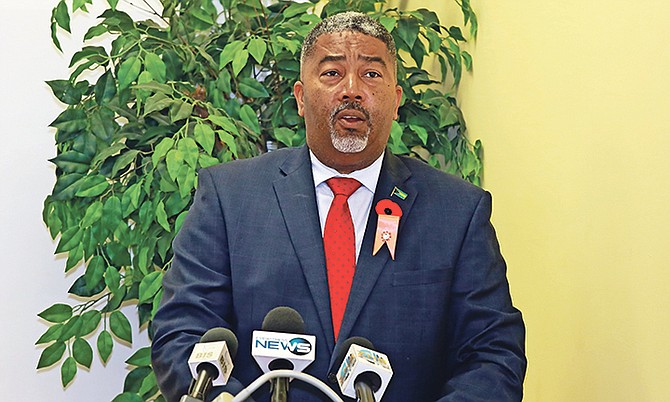 However, the minister said he could not reveal how many cases have been reported to the ministry thus far.

Speaking ahead of a Cabinet meeting yesterday, he told reporters: “I’ve heard of increased numbers. Specifically, I can’t give those numbers to you because you would appreciate that those matters would be reported predominantly to the police and then our people would get involved.

“But my information is that there have been increased matters of domestic violence, child abuse and that kind of thing.”

Asked yesterday about the ministry’s plans to assist those affected individuals, Mr Campbell said officials were working with numerous agencies.

He said: “Well, we have the good fortune of working with a good number of NGOs along with the Department of Gender and Family (Affairs) and so our people kick into action automatically and they do what they do. We are responsive whenever we hear of a matter and we do cross collaborate with the law enforcement officers, so we are a part of those inquiries.”

Last month, three people were charged in two separate cases of child cruelty in the Magistrate’s Court. Among them was a 23-year-old woman, who was sentenced to three months in prison after she admitted to beating her boyfriend’s son with a belt.

In response to the incidents, Mr Campbell urged parents and guardians not to “cross the line from disciplining to abusing” children.

He told reporters last month: “We’ve always and continued to admonish parents, guardians, persons with responsibility to not cross the line from disciplining to abusing and so the Ministry of Social Services does not support in any way form or fashion in a matter of fact we condemn any child abuse.

“We know that these are tough times and we invite parents or guardians to seek assistance. The Department of Social Services offers assistance and in collaboration with the Ministry of Health we offer counselling. We have parenting classes and so seek assistance but for God’s sake don’t take it out on the children.”

Seek assistance from WHO, WHEN, HOW? but the thing is Assistance has to be readily available for someone to seek and not be just words picked out of a hat and then thrown together to imply that assistance is there for persons to seek.

Is Domestic abuse and child abuse different, if it occurs in the same household?

Think of what this useless guy is costing our public treasury in terms of salary and benefits, and all because Minnis decided he needed a Creole speaking cabinet minister.