Insight: Uncovering The Early Childhood Traumas That Lead To Violence 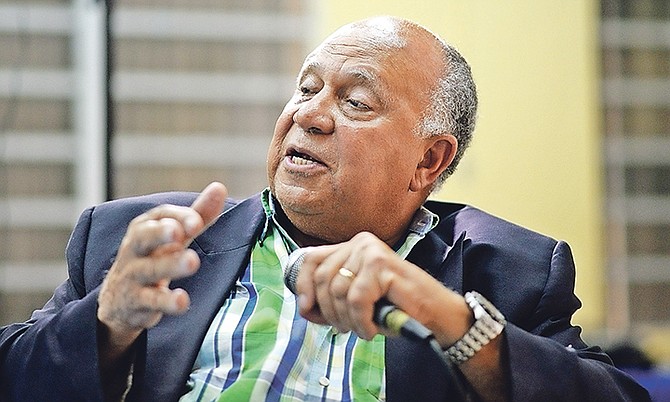 MANY of the adolescents who are brought before the courts for minor infractions suffer from post-traumatic stress disorder (PTSD), according to a pilot study conducted by leading psychiatrist David F Allen and local colleagues.

In their work the authors noted the average age of a murderer in the country is between 16 and 25 years and involves young men who have been “traumatized by abuse and social deprivation”. The study also concluded that many people who exhibited violent behaviour as adults were once victims themselves who had experienced childhood trauma in their developmental years.

In 2016, the authors recruited youth between the ages of 10-15 who were involved in misdemeanours such as bullying, disorderly behaviour and gang/turf wars. Those who participated were referred to the programme by social workers, probation officers and guidance counsellors “in conjunction with the courts”. Once referred, the adolescents and their guardians were interviewed and a “thorough history” of their backgrounds were recorded. The programme ranged from six months to two years depending on the severity of each child’s circumstances.

Arguing that a “hurt child” ultimately becomes a “dangerous adult,” the study sought to “intervene in the lives of troubled adolescents to prevent them from entering a life of crime and violence.”

“Meeting twice a week, Mondays and Thursdays from 4pm-5.30pm, the adolescents would share their stories of trauma and shame in the presence of two facilitators,” an excerpt from the study read. “Their parents were mandated to attend a separate meeting on Wednesdays from 4pm-5.30pm.”

Noting that family life was “non-existent or extremely chaotic” for the majority of the adolescents, the study revealed that many of those participating in the programme had experienced some form of physical, sexual or verbal childhood abuse or trauma from a parent or guardian.

“While some of their grade point averages (GPA) were unknown to the programme facilitators, those that were known were very poor and ranged from 0.5-1.00,” the authors noted. “... The adolescents displayed attention and behavioural issues, but facilitators were adept at maintaining good dialogue and participation. The group process was made more difficult by the gang dynamics amongst some participants. After each meeting, the participants would often gather in their various gang groups to ensure their safe journey home.”

Both of the facilitators were trained in psychotherapy. In many ways, they served as “mother and father figures” for the youths. The male facilitator was also a former gang leader who had obtained a college education after turning his life around. In the sessions, the facilitators found that the friend association was the “leading theme” discussed by the adolescents. This was because they believed that friendship was about safety rather than loyalty. To them, friendship could mean people could be close friends today, but enemies tomorrow if an altercation arose between the parties.

“Sadly, some of the participants live under serious threats because of gang involvement. They have shown us pictures of hitmen dressed in hoodies sent to their phone. The gang often represents the masculine part of the single-parent family. In other words, the gang is a perverse rescuer in that it promises the participants relief, but at the same time exposes them to greater danger and destruction.”

The authors also realised that it took a significant amount of time before some of the adolescents shared things that were “really troubling them.” For example, it took a year for one participant to say that he had witnessed another young man being murdered. “Some of the adolescents also showed a lack of empathy and remorse,” the study noted. “After a severe stabbing at one of their schools, one of the young men was asked if he felt sorry for the victim. He said ‘Why should I? He’s not one of my boy’s.’ The implication was that unless there is a direct association, there’s no reciprocal empathy.”

“These results are significant because they support our hypothesis that many of our adolescents who are brought before the courts for minor infractions are in fact so traumatized that they have a bona-fide diagnosis of PTSD.

“This means that they have flashbacks, murderous rage, poor impulse control, and feel hopeless about their life and future. As a result, when they are enticed, either by an individual, gang, or personal desire, they may do the most destructive acts.”

A cohort of 23 court-ordered adolescents took the Beck Depression Inventory (BDI). The results showed that 52-percent of the adolescents suffered from moderate to severe depression involving “deep-seated anger and rage.” The test also showed that seventeen percent of the participants suffered from borderline clinical depression, while 9-percent showed signs of a mild mood disturbance, and 22-percent had normal ups and downs.

The study noted that all of these scores proved that the adolescents had “significant levels of PTSD and depression.” It also highlighted five specific case studies that supported their findings. In the first case, a 13-year-old girl scored 19, the highest score for the PTSD Self-Test. She also scored 38 on the BDI which indicated that she was severely depressed and showed signs of “strong suicidal ideation.” During the programme, the young girl claimed that she had given up on life although she had a 3.78, which indicated that she had a high level of intelligence. Moreover, while she was being cared for by her mother, the girl had little attachment to her and did not know her father. She was referred to the programme by her mother because of her history with self-harm.

A 16-year-old boy scored 13, the second highest score for the PTSD questionnaire, which indicated that he was suffering “severely” from the disorder. The young man, who was referred to the program by the courts for fighting, also scored 40 on his BDI, indicating severe depression. The authors believed the boy’s Haitian ancestry might have been a “contributing factor” to his depression. During the programme, the boy was convinced that Bahamian males were “out to get him” and was also very hostile.

In the third case, a 14-year-old girl scored 12 on the PTSD questionnaire and 23 on her BDI which suggested she was suffering from moderate depression. She was also referred to the programme by the courts for fighting. The facilitators noted that the girl was “extremely impulsive and could easily self-destruct if not encouraged to change.” She was from a dysfunctional home and displayed a high level of anger. She was also failing school and was reading at a sixth-grade level.

A 15-year-old male scored eleven on the PTSD Self-Test. His score indicated that he was “severely traumatized.” During the programme, the boy did not seem to understand the “danger and vulnerability of his behaviour.” His reading ability was also at a third-grade level since he had dropped out of school and refused to attend another institution because of his Haitian nationality and gang affiliation. The authors noted that the boy had “explosive anger and expressed no remorse” for harming others.

In the fifth case, a 14-year-old male scored nine on the PTSD Questionnaire and 20 on the BDI, which indicated that he was suffering from borderline clinical depression. The young man appeared to be very angry. His two brothers had been murdered and he was a gang leader who had a “cruel revenge streak.” He was diagnosed with severe PTSD and had “deep-seated murderous rage.”

The results of the pilot study proved that most of the adolescents in the court-ordered program were born into difficult circumstances and had “estranged or non-existent relationships” with their parents. The programme also confirmed that many of the participants’ choices were influenced by friends or gang members.

“Some of these adolescents have been sexually abused by a family member, leaving them extremely traumatized and shamed. Others have witnessed traumatic events such as the murder of a close friend or relative. Unfortunately, exposure to trauma, especially witnessing violence, is the norm for delinquent youth in juvenile detention.

“Some of the participants are grieving the loss of a parent or sibling and their lives are characterized by mood swings, distrust, and depression...their trauma leads to severe anger which they self-medicate by abusing substances, stealing, and fighting. Many of them have experienced the Evil Violence Tunnel and have been violent towards themselves self-mutilation or attempted to fatally wound others.”

Notably, the major issue that stood out in all of the adolescents was the “traumatized nature of their lives.” This proves that if the “early trauma” many young offenders experience is not addressed, it will lead to more destructive behaviour like murder in “later teenage years.”