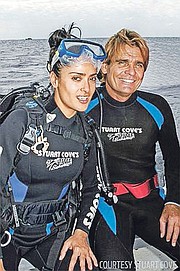 STUART Cove with actress Salma Hayek in the pre-COVID days.

A leading Bahamian excursion provider expects to resume business today with less than 10 percent of pre-COVID volumes, as he pledged: “I’m no quitter.”

Stuart Cove, principal of Stuart Cove’s Dive Bahamas, told Tribune Business “we should probably not re-open” given the “devastating” impact of a four-month shutdown that left his firm with zero revenue and forced it to return “at least $500,000” in cancelled bookings to customers.

However, saying that he had a personal responsibility to his 150 staff, of whom only around 15 will be brought back for the first re-opening phase, Mr Cove voiced optimism that his company’s “strong brand” and “recession proof” diving industry will enable it to rebound relatively quickly from the pandemic’s challenges.

He expressed disappointment, though, that the Government “suddenly” decided in late June to delay the re-opening of tour, excursion and attraction providers such as himself until July 13.

Mr Cove revealed that his company, in anticipation of opening on July 3 along with the hotels and other tourism industry segments permitted to resume two days prior, had been forced to cancel bookings by around 100 divers.

Many had already paid for their pre-travel COVID-19 tests, and Mr Cove said he feared the last-minute cancellations due to the Government’s date revision could hurt the reputation of his South Ocean-based business as well as that of the wider Bahamas.

While praising the Minnis administration for the tough decisions it has taken in managing the health and life risks presented by COVID-19, he added that its handling of the economic re-opening left something to be desired.

“We’ve been closed for four months, and things aren’t looking good because we had planned on opening on July 3 and had lots of bookings for that first ten days,” Mr Cove told Tribune Business.

“Then the Government, we learned suddenly, decided we should not open until the 13th. We had to cancel everybody again. It doesn’t look good for The Bahamas, but it’s crazy times.

“I think the Government has done a tremendous job in managing the virus, much better than many of the countries around us, but they’ve not done a good job in managing the opening. As the owner of a tourism firm, it’s like a moving target. Things change without notice and without reason. It makes it very difficult,” he added.

“When we were told the borders were opening on the 3rd we had all those people booked, and then they came up with the 13th, and that was just not fair. It makes us as an operator and agent look really, really bad, and the country look horrible.”

Mr Cove estimated that the loss of the 100 potential divers had likely cost his business around $50,000, adding that the company had received no financial assistance of any type from the Government throughout the pandemic.

He also disclosed that the diving excursion provider’s landlord, South Ocean owner, the Canadian Commercial Industry Workers Pension Plan (CCWIPP), did not provide any rental relief for the lockdown’s duration even though Stuart Cove’s Dive Bahamas “has not made a dollar in four months”.

“The rent is very, very expensive. It’s way over-priced,” Mr Cove told this newspaper. “We were in the process of building out a new place in Coral Harbour when COVID shut us down, but we’re keeping a stiff upper lip and talk of the virus is not going to kill us.

“We just have to hunker down. We haven’t made a dollar in four months. Zero. I sold one boat just to get through it. It’s been devastating. In all reality we should probably not re-open, but I’m not like that. I’m not a quitter. I feel responsible for my staff. They’ve suffered terribly through this thing.”

Mr Cove slammed the National Insurance Board (NIB) as “abysmal at best” in getting unemployment benefit assistance to his furloughed employees during the COVID-19 pandemic, arguing that the social security system was quick to demand contributions “but when it comes to them paying out it’s like pulling teeth”.

“I just feel dreadful for them,” he said of his employees in relation to the delayed, partial or absent benefits payments from NIB. “They will think I didn’t make the payments, which is not true. They [NIB] haven’t managed the money well in my opinion.”

Mr Cove is far from the only employer complaining about NIB, which has been overwhelmed by the sheer number of unemployment benefits claims it has received despite paying out more than $60m in assistance.

The dive excursion principal, meanwhile, said Stuart Cove’s Dive Bahamas will resume business today with himself and his son running the boats, and a manager and financial controller present at South Ocean. Another six to eight dive and beach staff will be present at Atlantis, and a further four between Lyford Cay and Albany.

With 15 out of 150, or around 10 percent, of staff recalled for the first re-opening phase, Mr Cove said negative global media coverage suggesting that the entire Bahamas had been devastated by Hurricane Dorian last September had cost the business much of its fall and winter bookings.

“We were sucking wind coming into the season,” Mr Cove said of a peak diving period that traditionally begins on March 1. “We had a rich season coming up, and a bunch of money in the book coming into March, and had to give it all - at least $500,000 - back.

“Our US booking office has been closed because we couldn’t pay those staff with no income coming in. I don’t have too much on the books. It’s pretty grim, I’ll be honest with you, very, very grim. Everybody is on edge. I think we’re going to start down by 90-odd percent.”

However, Mr Cove voiced optimism that the “recession-proof” nature of diving would enable his business to rebound fairly swiftly as persons sought to escape soaring COVID-19 infection rates in the US.

“That’s all we can afford,” he said of the initial 15 staff that will be brought back, “but as the business grows, and it should grow exponentially, we should be at a full complement in a couple of months. People go out diving no matter what. It’s a drug, and one thing that’s good is there is no COVID underwater.

“That’s a blessing. When we’re outside with the wind blowing we’ll be in pretty good shape... I honestly think it’s going to ramp up pretty quickly once people feel comfortable enough to travel on a plane and overcome their fear.”

Mr Cove, though, acknowledged that COVID-19’s impact had “been a lot worse than I thought it would be”, and said he had shifted from January 2021 to March next year as his anticipated timeline for when “people really start travelling again”.

Voicing confidence that The Bahamas will enforce its COVID-19 health protocols robustly enough to preserve its initial gains in the virus fight, he added: “We’re not going anywhere. We’ve been around for 40 years and have gone through some rough things, although we’ve never seen anything like this.

“One of my mentors in diving said: ‘Stuart, only the strong survive’. We have a strong brand, strong staff and strong management. The difference between this and a hurricane is our infrastructure is still in place.

“We’ve taken time to work on the boats, get everything up to speed, compressors. Everything is ready to go. We’re a key switch turn away from running again. We;re a resilient people, a resilient country, and we’ll weather this storm.”

Stuart Cove’s buses and boats will be operating at 50 percent of pre-COVID capacity, and the company has appointed a ‘COVID ambassador’ to make sure all necessary standards and procedures are complied with by staff and guests.

The company has also obtained a special solvent solution, recommended by the World Health Organisation, for cleaning regulators and equipment that goes in a person’s rough. Social distancing markers and regular cleaning will also be a common operational feature.

@truetruebahamian, I admire his attitude and positivity! It's this type of attitude that will help him to rebound quickly. All the best to you Mr.Cove. I wish more Bahamians were this positive!

I always thought he ran an above board, honest and safe operation. Good luck to a long time Bahamian entrepreneur...

Stuart is the real deal and a keeper!! I've dove with his outfit more times than I can count and have even met him a few times. I can feel his pain, worry, and frustration in this article. Can't imagine the amount of stress he is going through as a business owner and someone that genuinely cares about his staff.

Best part, he is 110% correct about scuba divers... it is definitely a drug. We are all addicted and can't wait to get back into the water!!!!