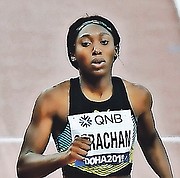 BAHAMIAN Olympic sprinter Anthonique Strachan had to settle for a third place finish in the women’s 100 metres on Saturday at the Velocity Fest 2020 All Comers Meet at the Ashenheim Stadium.

The privately ran one-day meet was held four months after sports started to return to some sense of normalcy from the spread of the coronavirus pandemic that halted all activities worldwide in March.

In windy conditions throughout the afternoon, Strachan was featured in one of the marquee events of the meet in the women’s 100m where Olympic and world champion Shelly-Ann Fraser-Pryce sped to victory in the meet that was closed to the general public and the media.

Fraser-Pryce, a mother now representing Nike, outclassed the field to easily win in a world-leading time of 11.00 seconds in a negative wind reading of 2.2 metres per second.

Shashalee Forbes of Sprintec Track Club’s was second in 11.49.

Also competing for the MVP Track Club, Strachan followed in third in 11.84 in the straightaway race. The Bahamian CARIFTA Games’ 2011 and 2012 Austin Sealy most outstanding award winner is working towards her prominence on the senior stage after she completed her junior career in 2012 as the World Junior champion in both the 100 and 200m.

Although she had to battle through a series of injuries over the past few years, Strachan went on to represent the Bahamas at the 2012 Olympics in London, England and in 2016 in Rio de Janeiro, Brazil as well as the World Championships in 2017 in London, England and last year in Doha, Qatar. She also ran the third leg of the Bahamas’ 4 x 400m mixed relay team, consisting of Steven Gardiner, Shaunae Miller-Uibo and Michael Mathieu that claimed the gold as the curtain came down on the third version of the World Relays held at the Thomas A Robinson Stadium in 2017.

Thompson-Herah, the 2016 Olympic double sprint champion, placed second in 22.98 with Forbes coming in third in 23.45.

Nesta Carter, also from MVP who is making his return to action after a doping suspension, took the men’s 100m crown in 10.38 with two-time World Championships’ bronze medallist Asafa Powell finishing sixth in 10.51.