Jp Rutherford Jr: ‘The Servant Leader Award, I Was Shocked That I Got That Too’ 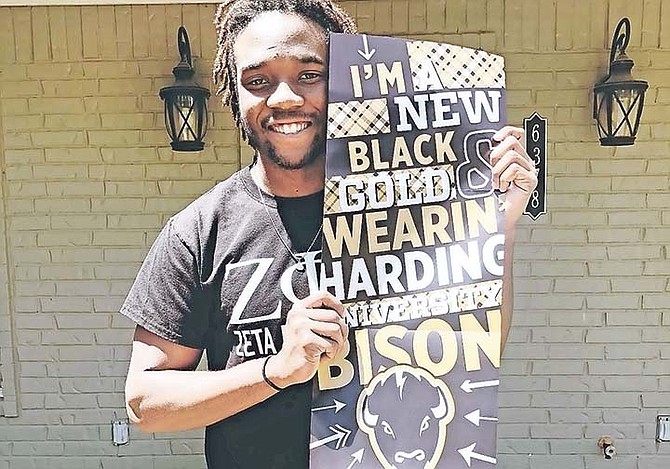 THE COVID-19 pandemic prevented Peter and Chavez Rutherford from travelling to Arkansas with other family members over the weekend to watch their son, Peter ‘JP’ Rutherford Jr, graduate from Providence Academy. What they didn’t regret was the decision they made four years ago to allow their eldest son to leave St Augustine’s College to further his high school education.

While he would have liked to have seen his family present, JP said it wasn’t their fault as COVID-19 is wreaking havoc on graduation ceremonies which, in most cases, has to be done virtually. Fortunate for him, Providence Academy actually had a ceremony with only the parents of each graduate in attendance because of the social distancing rule.

Sharing the moment with JP were his Arkansas home parents, Gay and Barry Gasaway, whom Rutherford Sr said his family are eternally grateful for the love and affection that they are showing their son.

The Gasaways took JP in their home from Bahamian-American Simeon Hinsey, the director of student-athlete development at the University of Arkansas, who originally arranged for PJ to stay in Arkansas with him and his family when he first arrived.

As he reflected on the momentous occasion, JP said there was one important thing missing at the ceremony, which turned out to be an event that he will cherish with pride for the rest of his life because of his achievement.

As a 6-foot, 3-inch forward on the Patriots basketball team, JP averaged about eight points, seven rebounds, four steals and two blocked shots. Two years ago as a sprinter on their track team, JP ran his lifetime achievement of 11.00 seconds in the 100 metres and 23.1 in the 200m.

He suffered a grade-A right hamstring injury in December and had worked his way back into form and was preparing to compete outdoors this year, but all sporting activities was shut down because of COVID-19 and he wasn’t able to display his true potential as he winded down his campaign for the Patriots.

The injury and the cancellation of sports hampered JP’s ability to land an athletic scholarship to a prestigious college or university. But more importantly, JP was given an academy scholarship to attend Harding University, a division II school in Arkansas where he intent to pursue a degree in criminal justice, starting in August.

“After I didn’t get any favorable answers from all the other schools that I applied too, within two weeks of applying to Harding University, they accepted with the scholarship,” JP said,

“It’s a small Christian school, which is only about three hours from my high school. I also heard from the track coach, who is interested in me running track, although he couldn’t offer me a scholarship right now because they have some seniors, who are returning for their final outdoor season. That was why I chose Harding University.”

Looking back at his tenure at Providence Academy, JP said he was pleased that he made the decision to leave SAC to complete his high school education because he was able to grow spiritually, physically and mentally.

“I made a lot of friendships that I intent to keep for the rest of my life,” he pointed out. “I’ve also been a part of some many teams and different associations that have given me a lot of life experiences that I hope to use in college.”

While the 18-year-old said he was disappointed when he heard that sports was going to be stopped, but it gave him the opportunity to focus on his education and it paid off in the long run as he completed his tenure with a 3.78 grade point average.

“Our state (Arkansas) didn’t have as many cases of Covid-19 as some of the other states,” JP noted. “We had the lockdown, but it wasn’t duper crazy. I know they took down all of the rims and closed all of the gyms, so you couldn’t do anything.”

JP, however, said he’s glad that they have eased up a lot of the regulations and while they still have to practice the social distancing, he miss being at home in the Bahamas.

“One of the first thing I would like to do when everything is done and we can travel, I would like to see my grandmothers, Minister Esmeralda Rutherford and Deloris Darling. I haven’t seen them in a while,” JP said.

“I would also like to see some of the people who were there for me from the time I left the Bahamas. I’m just grateful to everyone in the Bahamas who was praying for me. I hope I did them all proud.”

Rutherford Sr said when they made the decision to send JP off, there were some naysayers who tried to discourage them.

“I’m glad we made the decision. We trusted God,” he said. “To see him go over there and become a government leader in his school was quite an accomplishment. He was able to develop his leadership both on and off the court and the track.”

Rutherford Sr, a graduate of Nassau Christian Academy, who went on to attend St Augustine’s College in Raleigh, North Carolina with his brother Patrick on soccer scholarships, said while they didn’t get to witness JP’s high school graduation, they are looking forward to do it at the end of his collegiate career.

“Covid-19 has taught us so much. We have a lot to be thankful for at the end of the day,” said Rutherford Sr, a Bs major in accounting and a CPA, who faced his own personal challenge on his job on his birthday last month.

“He was able to do exactly what he went over there for. We were not there to physically watch it, but he made us proud. Our family, his grandparents and some other members of our family were looking forward to going there for the graduation.”

On December 28 when JP pulled his hamstring in Alabama, Rutherford Sr was there to watch him compete in a track meet. After he got the necessary treatment and therapy from the University of Arkansas, JP suffered the flu as he competed in his first track meet. The next scheduled, the season was shut down in March because of Covid-19.

“The times he ran in grade 10, he was looking to improve on them this year,” Rutherford Sr said. “So it will be interesting when he get to Harding University whether they want him to run track, play basketball or even football.

“He’s never played football obviously, but we’re just watching to see what they will do. Harding is a small Christian school where he could get a good quality education. I’m so proud to see how he’s done both academically and athletically coming out of Fox Hill.”

Rutherford Sr said despite the racial tension that has resurfaced in the United States after the death of George Floyd in Minnesota and the unrest that he brewed round the country, he’s proud that his son was connected with a loving and caring white family in the Gasaways.

“Gay and Barry Gasaway have been nothing short of amazing. I think they spooled JP more than they did their own children,” Rutherford Sr said.

“They sacrificed so much for him on their ranch. I think God has selected JP for the right time and place with that family. Never once did me and my have a concern about his wellbeing or care taking. Even when he got injured, they made sure he had the best medical attention.”

“I really didn’t have to worry about anything. They made me felt right at home,” he said. “I couldn’t ask for a better family to get through this experience. I appreciate them so much for all that they did for me and my family.”

As he now prepare for his tertiary education at Harding University, Rutherford Sr said JP will be in good company as he continue his athletic pursuits. He noted that the head track coach, Don Hood, is one of his fraternity brothers, who has wowed to ensure that he gets the best opportunity to succeed.

“God has a reason for everything,” Rutherford Sr said. “That’s why he didn’t get in any of the bigger schools because he didn’t have any times this year.

“He didn’t have any indoor season, he suffered the hamstring and then Covid-19 shut down everything. But he’s still got an academic scholarship and will still get an opportunity to compete in sports at the collegiate level.”

With two younger sons still at home, Rutherford Sr said he doesn’t envision any of them following JP in leaving the Bahamas for high school.

He said Perez Rutherford, 14, is heading into the ninth grade at St Augustine’s College and he’s plying flag football and is a member of the Barracuda’s Swim Club, while Paidin, aa 11-year-old preparing or grade five at Kingsway Academy, is participating in soccer and will be joining the Barracuda’s this year.

“I believe they both will be taller than JP, but it will be seen whether or not they will surpass what JP is doing,” Rutherford Sr said. “I’m not pushing any of them in sports, but whatever they decide to do, I will be there to support them just as I did with JP.”