Dames - If I Thought It Wrong, I’D Speak Out 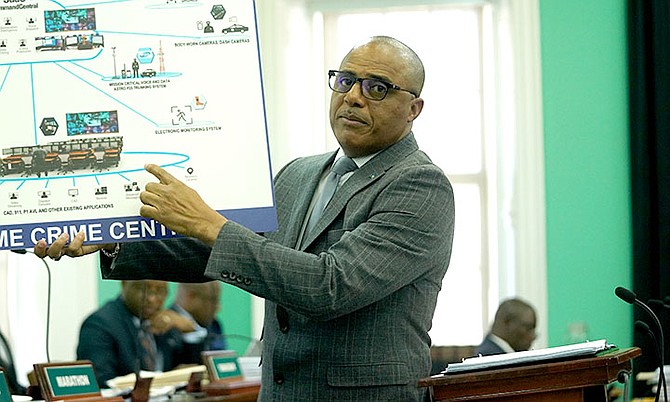 NATIONAL Security Minister Marvin Dames yesterday defended his character amid controversy surrounding the government’s handling of missing Hurricane Dorian victims, insisting that whenever he sees wrong “whether inside or outside Cabinet”, he will “express” himself.

Giving an impassioned contribution in the House of Assembly yesterday, Mr Dames rebuked critics over the matter, insisting he will never support any wrongdoing as it is his duty to protect the Bahamian people. His comments came after former Health Minister Dr Duane Sands blasted the Minnis administration’s handling of missing Dorian victims, noting that an explanation was needed for how hundreds of names were culled from official lists.

Although Mr Dames did not directly address Dr Sands in his speech yesterday, he made a veiled reference to the former Cabinet minister.

“You see because we can come into this place as is and that’s what been going on for decades and we can make up but at the end of the day, the Bahamian people know best.”

He continued: “This generation can see beyond the fluff and the nonsense and the waste of time, they can see beyond that and each and every one of us will be measured. Don’t come here and say what you could’ve done or what should’ve been done. The question is when you had an opportunity to effect change, did you do it?”

Speaking in the House of Assembly last week, Dr Sands criticised the government’s handling of Dorian missing victims, saying too many government agencies were involved in dealing with the process, creating a “recipe for disaster”.

His comments came weeks after ACP Solomon Cash told reporters 33 people were still missing from the Category Five Storm. However, after the former health minister resurfaced the issue last week, Mr Dames revealed that 279 people were listed as missing after Hurricane Dorian.

On Tuesday, Mr Dames told reporters he cannot say why the number of people he identified on Sunday as missing after Hurricane Dorian differed from the figure ACP Cash gave.

“The numbers that were given are not Marvin Dames’ numbers,” he said outside Cabinet on Tuesday. “They are the numbers compiled and taken from the centralised listing…All of these numbers are now in the hands of the police. Let’s not get fixated on this and I think sometimes we get caught in a position where we say ‘oh something is amiss, what is amiss?’”

Saying he takes his job “very seriously”, the Mount Moriah MP insisted yesterday that his duty is to serve the Bahamian people.

In view of this, Mr Dames said if he felt the Minnis administration was heading in a direction that went against his beliefs, he would resign.

He said earlier in his speech: “I also said to the leader that I am who I am and anytime I feel that the Cabinet is taking a course or direction that goes completely against who I am and how I was brought up, he need not worry, I will tender my resignation and go in another direction.

“My obligation as the Minister of National Security and the Member of Parliament for the great constituency of Mount Moriah is to the people of this country, not to any one individual. Not to any one individual and whenever I see wrong whether it’s in Cabinet or outside Cabinet, I’m going to express myself – the only way I know how to.”

Mr. Dames don't believe you, the only way you would speak out is if you were forced to resign like Dr. Sands had to.

A TRUE LIAR believes his own LIES and there goes Dames. They are trying to convince themselves with all of these boards and pictures and placards,

Dames need to stop the garbage. Every one know that if you are in Cabinet and you speak out that it automatically means that you will be fired from Cabinet. You don't get to be a part of Cabinet and speak out. That's the stupidity of collective leadership and the Westminster system. It doesn't work that way.

The clear fact that he is trying to get people not to focus on the numbers not adding up is clear sign that he doesn't speak out.

Tried of the nonsense from these politicians, who are supposed to be so intelligent but act so ignorant.

Dames the PLP put Urbane Renewal in place out of this came the music programs they also had a program to help the young men of the Bahamas.

Ask the former Deacon about it. See if you can get the TRUTH out of him, I doubt it though. because he is member in chief of the biggest liars on God's green earth,

Oh boy, is it now the Imperialists red coats brushed aside spin that although thousands the PopoulacesOrdinary at large POAL has been seeing the governing wrongs - a comrade substantive crown minister, couldn't possibly have witnessed anything but the best foots?
Any former crown colleague of the Imperialists' red coats he had better not say too much for we know it as a fact that once the PMO. sees any red coats lambasting them with questions from the opposite benches as a major threat, and even more so for having locked arms with the ranks the PLP official opposition in the House, tis but a matter of time till them be's treated like real PLP's, which calls for the siccing of members the Royal Constabulary commences upon them.
Even their own supporters are increasingly in numbers beginning to question wether the ever-changing mood and arithmetic swings by the red coats are but a test to weigh how far a government can go to suppress freedom of movement orders against an unsuspecting and tolerant PopoulacesOrdinary POAT? Nod Once for Yeah, Twice for No?

Dames seems quite content to let his political future get flushed down the proverbial toilet along with Minnis's come the next national general election.