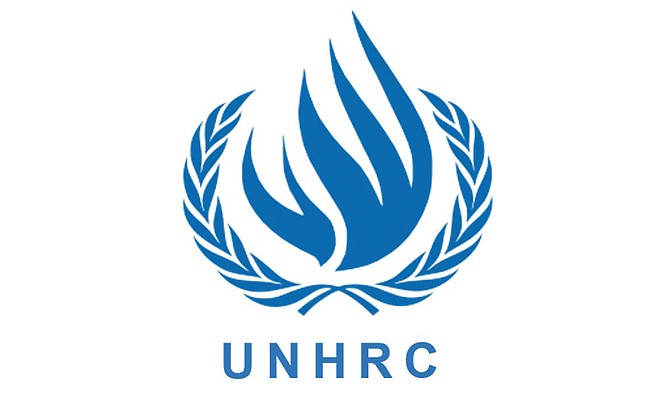 THE Bahamas has joined the international chorus calling for "an urgent debate on racism” as people across the world continue to protest police-involved violence against black people, which was sparked by the killing of George Floyd – an unarmed African American man who died in Minneapolis last month.

This comes following the end of a debate on human rights violations, systemic racism and police brutality, which was hosted by The United Nation Human Rights Council (UNHRC) earlier this week.

During the debate, members had called for an independent investigation into Floyd’s death and killings of black people in the US and abroad, but the draft was rejected and a more comprehensive approach to the issue was called for instead.

Delegates are seen prior to the vote at the United Nations Human Rights Council in Geneva, Switzerland, Friday. The UN’s top human rights body has voted unanimously to commission a UN report on systemic racism and discrimination against black people. (Fabrice Coffrini/Pool Photo via AP)

On Friday, the UNHRC unanimously adopted a resolution calling for a report “on systemic racism, violations of international human rights law against Africans and people of African descent by law enforcement agencies.”

The mandate, which will be headed by UN High Commissioner for Human Rights Michelle Bachele, also calls for an examination “into government responses to anti-racism peaceful process, peaceful protests, including the alleged use of excessive force against protesters, bystanders and journalists”.

In a statement released on Friday, the Ministry of Foreign Affairs said it welcomed the adoption of the resolution, noting that officials are looking forward to having discussions on the human rights issues. Officials also reaffirmed the country’s commitment to protect “the civil, political, economic, social and cultural rights" of people.

“As a nation of majority people of African descent, with a shared history of slavery, we condemn all forms of racism and believe that equal treatment is a human right founded in natural justice,” the statement read.

“Today, the international community, by way of consensus adopted a draft resolution to further promote and protect the human rights and fundamental freedoms of Africans and people of African descent. In its statement to the UNHRC, The Bahamas reaffirmed its commitment to ‘eradicating racism and protecting the civil, political, economic, social and cultural rights of all’," the statement read.

“The Bahamas looks forward to engaging with other member states on the question of racism and human rights, which is of grave concern and needs to be eradicated wherever it raises its intolerable head.”

The draft resolution is entitled, “the promotion and protection of the human rights and fundamental freedoms of Africans and people of African descent against excessive use of force and other human rights violations by law enforcement officers".

So called racism will always exist as long as people put their ethnicity above their humanity and the humanity of others and or see themselves as better than others. Its time to call all hateful acts against others the crimes they are and stop giving labels for the same hateful acts depending on the color of the person who commits it. I have observed that many seem to think racism only flows in one direction (white to black) and few consider the magnitude of so called reverse racism. Stop with the racist labels and lets just call stupid, ignorant and hateful acts of pride just that!!

Well said,JoeBlow. We have majority Black hatred against Whites here in the Bahamas but Black Bahamians really don't care about that. We also have a lot of rich Black hatred of so called "Poor Blacks", and rich Blacks and Poor Blacks hatred against Haitians. Black Bahamians need to wake up and smell the coffee. Our Independence Day celebration celebrates Black Bahamian and totally forgets about White Bahamians. If white Bahamians dare go out to the celebration, they are called names and have to endure people speaking under their breathes

This actually would have been a great time to put pressure on Italy for the 2 Bahamians killed there. Behind the 8 ball again

Clearly they appear to not teach worldwide history in the Bahamas these days. The anglo saxons are a fairly new tribe in the eons of history and there is certainly not many of them left in Britain now.

In fact the French, Spanish, Portuguese, Italy who would object to being called Anglo Saxons never mind the Arabs and West African "Back" Chiefs that sold their people for profit into slavery!

Slavery in many forms was endemic in the whole world for eons before Anglo Saxon even exited perhaps the Celts lives matter :-) should demonstrate in Italy against what the Romans did to them, or perhaps Arab Lives matter demonstrate in Ankara maybe even the Saxons left in Britain demonstrating in Oslo, Copenhagen or Stockholm about the Vikings taking slaves never mind complaining to the UN which is a spineless oragnization design to keep Diplomats with salaries UN passports and tax free pensions!

It must be remembered that the average british worker/familes during the days of Empire were treated in many ways worse than slaves, at lest most slaves were at lest feed! The infamous Workhouses were not that long ago! Lest we forget also regardless of the British history it was the first country to abolished slavery and using it's Navy to combat slavery by other countries two of which were the US and Napolian's France, if I recal the British allowed escaping slaves to settle the Bahamas. Some Arab entities were still keeping slaves as late as the 1960s! Let's, as one contributor has said here treat each other as humans.

The Minnis-led FNM government should be totally focused on the dire needs of so many in our society today, especially against the backdrop of the worst economic outlook our country has ever seen. Unlike the US, we've had majority rule in our country for over half a century and have only ourselves (the majority) to blame for the serious financial predicament we find ourselves in today. The current FNM government would be foolish to waste time taking a page out of the PLP's old worn out racism playbook in an effort to try blame their own serious shortcomings in governing on white Bahamian racists. Besides, none of us over the age of 60 would be willing to watch Roots for the umpteenth time on ZNS TV.

60? talk age..I almost said "boy" but I had to retract my thoughts for fear of being accused of using racist terminology:-| Roots was playing straight up to the 80's. I think they even played a new fangled version somewhere in the last PLP administration.

They will always find something to divide us so our eyes are not on the piss poor job at governance ALL of them are guilty of. The PLP gat black and white, dem white people gat our land!, and the FNM gat young vs old, dem old people gat our jobs! Watch, they always back the view of the majority but never do a lick to address the source of the fire they fanning

Bahamianson analogy of local racism is a classic white Bahamian racist copout. His statement of "majority Black hatred against Whites here in the Bahamas" is 100% pure fictional fallacy that he cannot remotely begin to substantiate!

The first obvious observation is when dealing with white Bahamians the Haitian "knows his place". He will never question or stand up to "massah boss", and will always be happy, and subservient to the white Bahamian.

Regarding the idea that a "lot of rich Black hatred of so-called "Poor Blacks". The Bahamas is very guilty of the phenomenon known as "class discrimination", also known as classism, which is prejudice or discrimination on the basis of social class.

One thing is for sure; you're one sick and horribly demented racist puppy with white fur envy. Most of us Bahamian puppies are thankfully quite comfortable in our darker fur notwithstanding the economic hardship we have brought upon ourselves since majority rule. Sadly some of us are now left to wonder whether the Bahamas would be better off today had we remained under minority rule. We seem to have done ourselves in and no doubt persons like you played a great role in allowing that to happen.

😂 Copying the States in everything!