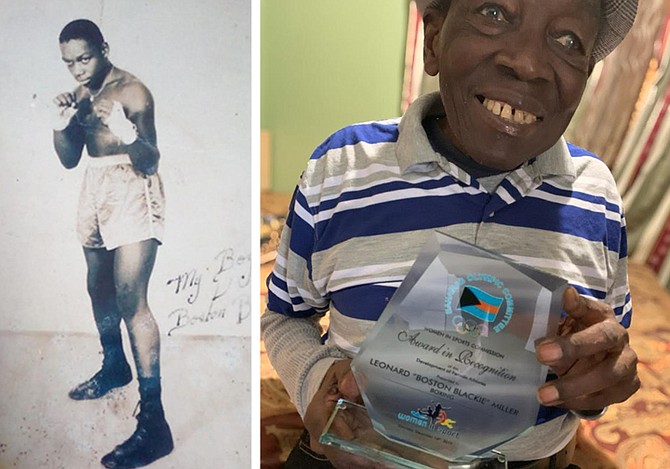 LEFT: Boston Blackie dazzled crowds with his boxing style for three decades. RIGHT: The Bahamas Olympic Commission’s Women in Sports honoured him in December last year. He was at his wife’s funeral at the time.

Leonard Joseph ‘Boston Blackie’ Miller spent his last Father’s Day on Earth, this Sunday past. His life and legacy is one of a nation builder in athletics in The Bahamas, and mentor to many.

As he was writing the final chapter of his life, I was busy learning his story, speaking to his family and friends in order to write this feature in his honour. His story, like so many of the great leaders of our country who are falling one by one, must be recorded for the sake of a youth who will need the knowledge of their past to guide their way toward a great future.

I started working on Boston Blackie’s story weeks ago, but something kept holding it back like a Divine intervention. One thing after the other affected its publication. But today, as his name is brought up with affection and sympathy as love pours into his family on the event of his death, they will have this testament to be proud of.

Boston Blackie was born on July 20, 1937, on East St behind The Pelican Bar, to Marie Armbrister; he was raised by his aunt. He was a young boy when his athletic prowess was first discovered. By the time he was 12-years-old he had already become the junior champion in boxing in the country.

Matches were regularly held during his era at places like the Silver Slipper, Zanzibar and The Nassau Stadium where large crowds gathered to witness the sport.

As Leonard grew in age, he moved up the ranks and divisions in boxing. By the time he was 23, he had already claimed the heavyweight championship title of The Bahamas. Boston said that the defending champion, Cleveland “KO” Paris would not defend his championship by taking him on in another fight.

At age 25, Boston held both the light heavyweight and middleweight titles after a series of events held at the Stadium on Wulff Road, The Oakes Field Hanger, and Zanzibar.

The 1960s were fantastic years for Boston in the sport of boxing. He enjoyed the status of heavyweight champion and he gained experience fighting against competitors from around the Caribbean as well as from America. He won against Joe Moss of Miami in April of 1966, and won again in June against Sanford Harris of Jamaica in a Freeport event.

Boston enjoyed a career in boxing that spanned nearly three decades, took him around the region and won him the adoration of scores of fans along the way. By the time he was 40-years-old, he had defended the West Indies Heavyweight Championship title once again. He did that in a knockout performance against Sherwin Johnson at AF Adderley Gym. He did it with flair and his famous ‘bolo’ punch that caught many of his competitors by surprise.

For some, that would be the end of the story. But not for a consummate athlete like Boston Blackie. This rising star was cutting out a path in cycling during the same time that he was keeping in top shape and form for boxing. His cycling career erupted with great fanfare in 1956 when he raced to a dead heat with defending champion, Leviticus “Romeo” Farrington.

He continued his trek to stardom by racing to top place finishes over the next decade, according to a Ministry of Finance tribute. He continued his domination in the 1960s and 1970s, representing The Bahamas at the West Indies Goodwill Championships in 1965 when he nearly equalled the performance of fellow competitor Roger Gibbon, a British Commonwealth Champion. He also competed at the World Cycling Championships in 1970 in London, England.

In 1974 he returned to the World Championships in Kingston, Jamaica. There he was aided by team mates Nathaniel Munroe and Derek Bethel.

He did all of that before 1977 when he retired from active boxing. His charisma, agility and strength, combined with an enigmatic personality, made people want to see this athlete in action. This inner city legend then made it a point to immediately start to pass on his skills and passion to the next generation.

Above and left: National Sports Hall of Fame alumni Leonard Joseph “Boston Blackie” Miller during his career; right, with his granddaughter, Minerva.

He remained active in sports and was known to have an effervescent energy that he rubbed onto his students. For many years, he coached at Government High and CC Sweeting High schools and played a pivotal role in the students’ ability to dominate in sports in national events. Some under his tutelage have gone on to become world class athletes. He gave unselfishly in service to many Bahamian Olympic teams as a coach and medical trainer. Throughout his life, he has travelled to almost every continent as an athlete, coach, or support staff for his country.

“Boston Blackie is a Bahamian icon – a uniquely gifted Bahamian athlete,” says Alvin Sargent, former president of the Amateur Boxing Association, the Boxing Federation and the Boxing Commission. “His life was totally dedicated in all aspects of boxing. He believed in mentoring and teaching young men to be the best they could be. At one point, he established a youth boxing club at the Simpson Penn School for Boys. Boston was among the first Bahamians qualified as an international referee judge. That was in 1982… along with Basil Hanna, Terry Goldsmith and myself. He was the national coach for many years and traveled extensively to a number of boxing tournaments around the world. In 1977 when Fred Stirrup decided to resign as president, Boston was instrumental in ensuring I was elected as president. He mentored and encouraged me.

“Boston had training sessions at Jumbey Village, Zanzibar, Bird Land on Montrose avenue, and at the Nassau Stadium. I was his protégé, as well as Freddie Major lightweight champion of the Bahamas; Sammie Whymms, the welterweight contender; Stephen Larramore, the Commonwealth champion; Ernie Barr; Marvin Smith; Darold Dorsett, and Wellington Miller.”

It was Wellington Miller who had been trying to pay his dear friend Boston a visit so that he could video chat with me, but COVID-19 has changed the way we do so many things. Boston was 83-years-old, and was suffering from ailing health; therefore it was better for him to not have visitors.

The last time I saw Boston Blackie was in 2013 when then-Member of Parliament for Carmichael Daniel Johnson opened a community centre. It included a boxing programme and that summer, Boston Blackie would spend one of his last summers giving his all to the kids. I remember him being a hilarious person, filled with life and someone the kids took to readily even at his age.

Fred Stirrup and Wellington Miller went from his students to his lifetime friends and they learned so much from him in the process.

Wellington shared fond memories: “A team of boxers had trained hard, and had qualified to travel to compete in the Pan Am Games. The Olympic Association told them, they didn’t have the money. Boston called me and told me to pick him up 8am. I picked him up, and he told me to take him to the insurance company. Boston actually cashed in his life insurance so that team of boxers could go off. He said, ‘the boxers have to go!’ I have never seen or heard of anyone doing anything like that ever again. He has given of himself so many times - his time, his money, his home. These boxers came from Cat Island, and Boston would cook and take them food every single day. Boston has literally built sports in the Bahamas. When it comes to sports, there is no one who could outshine Leonard Boston Blackie Miller.”

His light shone until the age of 83, passing quietly at the Princess Margaret hospital. He and Minerva lived with their daughter Maria prior to their deaths His granddaughter Minerva called me right away to share the news. She was overcome with emotion and she let me know that the family was taking it hard at the time. He meant so much to them and she is calling for the government and the public to do more to honour her grandfather.

While giving so much of himself to sports and to the kids, he didn’t neglect his family. He lived fully with the love of his life, wife of 59 years, Minerva Miller (nee Moss). She died on November 25, 2019 at the age of 84. Their living children are Maria Miller, Latoya Stuart, Theresa Williams, Flossie Cooper and Charles Miller. They were predeceased by their children Leonard Miller Jr and Mavis Bodie, and one deceased grandson, First Officer Frahkan Cooper, a pilot.

Boston’s dear friend, Sam “Marathon Man” Williams called me consistently to make sure that his legacy could be captured in my column. He wanted Bahamians, and the world to know about someone who was a husband, father and friend to many – the epitome of a man who deserves to receive his flowers on Father’s Day.

This man was a wonderful Bahamian. I came to know him when he was working with my nephew, Valentine Larimore, up there at the then Boys Industrial School.

I didn't know he was still around. I thought he had passed when I heard his son, Benjamin, passed.

Anyway, he really poured out his heart to help our wayward young men. He worked to afford them discipline and opportunities beyond the wayward lifestyle they knew.

I know of no reason why 'Boston Blackie' should not be awarded our Countries' highest honor.

May his soul rest in peace.