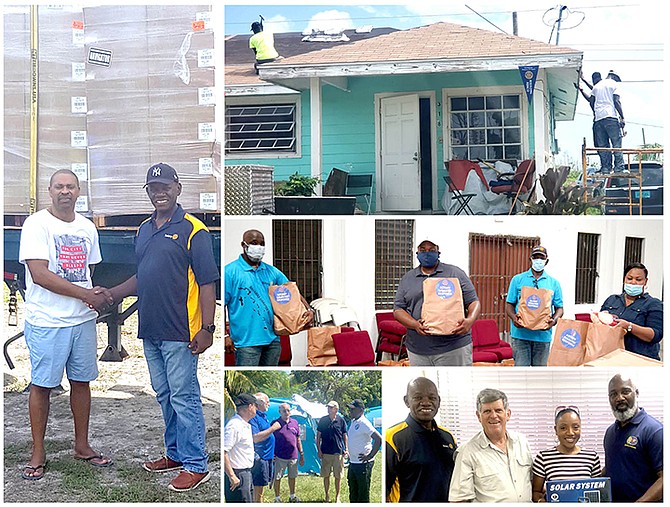 Rotary International to spend approximately $10 million on the recovery of the island of Abaco, immediate past president, Barry Rassin has told The Tribune.

Along with the $10 million comes a promise of Rotary staying with Abaconians until their lives return to some semblance of normalcy.

“A disaster comes in parts,” the Rotarian explained. “First there is ‘Immediate Relief’. Rotary Clubs in this country were unbelievable. They all stepped up to provide immediate relief. We worked with the airport, with registering individuals, we were on the boats that went to Abaco to bring in the evacuees. Each club adopted a shelter in the early days so they could help the shelter with whatever they needed like food and supplies.

“We moved evacuees from place to place to make sure they were getting what they needed and raised funds. Freeport is a little different because they are a separate district than us, but we work very closely together. Freeport also has a Rotary water plant that is only used for emergencies. Rotary raised the money to build it. It is only for emergencies so we do not compete with anyone. After Dorian, we had the first water that people could drink on the island. The Rotarians distributed that water. People would come to the plant with bottles and we would fill them up with water. I think they were producing 15,000 gallons per day.”

Many Abaconians have complained bitterly, saying that any assistance given them, comes from the private sector or foreign entities. They want more from government and think what has been done so far is not enough.

Rotary International includes 45,000 clubs in 200 countries around the world. Its mission is “World Understanding” and “Peace”. Rotary focuses on projects in areas like, education, water sanitation, economic and community development and disease prevention, donating at least $400 million per annum. Mr Rassin said because of Freeport Rotary Clubs’ connections with Florida’s Rotary Clubs, over 250 tons of supplies were brought in to assist Freeport. The Disaster Relief Authority is aware of the good work Rotary International has done on the islands of Abaco and Grand Bahama.

“Once we got past the immediate relief we started on long term repairs,” he continued. “There were several projects. They started helping the fishermen get their boats back. All the boats got washed on land. We purchased 30 engines for them to put on the boats, so the fishermen could go back to work and start rebuilding the economy. That was $189,000.”

He noted the Rotary Foundation which covers the world, has been extremely supportive with anything related to Hurricane Dorian’s disaster recovery and COVID-19. He explained how money is made by Rotary to fund disasters such as Hurricane Dorian.

“We are able to take some of the money we have raised, then go to some country and get them to match what we get,” Mr Rassin said. “For example if we have $10,00 we can get another country to match that with $10,00 then we go to our Rotary Foundation to match both of them. So we can turn that $10,000 into $40,000 and that’s what we want to do to fund the projects in Abaco.

“The other big project in Freeport; they have been repairing roofs. So they would go from community to community to see which residents need help. What they did was select a community leader and put him in charge and then let him find people in the community to help repair the houses. So it was, ‘we will buy the supplies and you will provide the labor’ and they started repairing house after house. That was a priority and they are still working on that. They have done dozens of roofs. We also had donations of tiles from Rotary in Florida as well.”

Rotary International has partnered with the United Nations Development Programme (UNDP) and purchased two recreational vehicles which just arrived in The Bahamas last week. One of the vehicles is for Abaco and the other for Grand Bahama.

“The UNDP will put experts in building construction into those vehicles and they will go from community to community to help the residents know what they need to get their houses repaired,” said Mr Rassin explaining what the vehicles are for.

“They will help them with building codes, help with what suppliers are available or help with inspectors and whatever else they need. United Nations will operate and maintain the vehicles and when they no longer need them, then we can use them for the next disaster. We are trying to think long term as an organization.”

“They had one plant going which one of the international agencies put there,” he said. “So we partnered with a few local groups like Pure H20 and we now have a portable reverse osmosis water plant in Treasure Cay. That enables us to distribute 10,000 gallons of water per day. So the water plant, like the vehicles, is portable and when they no longer need it we can use it for next disaster.”

Rotary has partnered with a group called the “Idea Foundation”, led by Will Tomlinson, to purchase $100,000 worth of food for Abaconians, under the guidance of a nutritionist. Rotary also took charge of seventeen children who lived in an Abaco orphanage destroyed by Hurricane Dorian. The children were transported to the Ranfurly Home and Rotary donated some $100,000 to the home along with twenty-six beds. Mr Rassin said Rotary replaced the roof for the lighthouse keeper’s quarters at the Elbow Reef Lighthouse.

The service club donated 60 generators to Abaconians, and a 60KW generator to power a building that houses a community centre. Mr Rassin said Rotary’s intent now is to repair schools and build shelters on the devastated island.

“We most definitely want to be a partner with building the shelters,” he said. “You have to look at all aspects of the community. That’s what I like about Rotary; we are not going to focus on just one thing. Schools are very important. So I want to make sure every school there is made whole. I just need the Disaster Relief Ministry to tell us and then we can adopt a few schools. I can go to Rotary in countries around the world and say, ‘I’ve got school X and I need $200,000 to $400,000’ and they will help.”

Rotary is in talks with the Chamber of Commerce, for a possible partnership in projects to restore Abaco. And, Doctors Hospital has been in conversations with Abaco authorities to find a way to assist with health services especially in Treasure Cay.

Summing up the plight of Abaconians, Mr Rassin said it’s going to take a lot to rebuild Abaco, but it can be achieved if everyone steps in and assists.