Shot Toddler Still Has The Bullet Inside Her 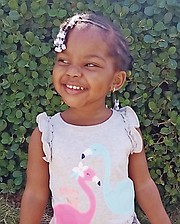 THE mother of the two-year-old girl shot in Eleuthera on Saturday night believes the gunmen were after a man who lived nearby and not her mother’s house.

The toddler, Da’Nyla Roberts, was sitting on the porch in her grandmother’s arms when she was shot in her abdomen shortly before 10pm. The incident took place on Baby Johnson Lane in Hatchet Bay.

The child’s mother Dwainelle Guillaume, 23, said the ordeal has been understandably tough for her family. Da’Nyla is in critical condition after being airlifted into New Providence and her family has appealed for O+ blood donations. Despite still having a bullet lodged in her, Ms Guilleume said Da’Nyla appeared in “high spirits” during her last hospital visit.

“The last time I saw her she was up,” Ms Guillaume said. “She was in and out of consciousness but she was talking. She was saying her colours. She wanted her phone to watch YouTube. During all this, having the bullet still in her, she was still in high spirits.”

The two-year-old suffered internal organ damage to her lung, her spleen, her kidney, her liver and bowels.

“I didn’t know where to put myself,” Ms Guillaume said, recalling her emotions when she learned her young daughter had been shot.

To make matters worse, due to COVID-19 restrictions, Ms Guillaume and the child’s father are not allowed to spend as much time with Da’Nyla as they would like.

Police said on Sunday that two male suspects were arrested and are assisting with the investigation. Although there is no known motive behind the shooting or if the men knew the family, Ms Guillaume believes the gunmen were after a man who lives nearby and not her mother’s house.

A GoFundMe page has been set up appealing for donations for the child’s medical care. To make a donation, visit https://www.gofundme.com/f/donations-for-danyla-roberts

Anyone with information on this or any other crime is asked to call police at 502-9991 or Crime Stoppers at 328-TIPS.

Where is the outrage for this precious baby? Several weeks ago people on this forum were crying over 3 thugs who were killed by police. Today, not a word about this senseless act. We have certainly lost our way as a nation.

I feel sorry for us. A young toddler was shot and in critical condition and no one says a word......sickening! We would rather waste our energies on thugs.

I pray that this precious baby recovers from this evil act.

I agree 100% with you. Gives you an idea of the type of persons who post comments here.

These gut wrenching sad sad incidents plaging nation for decades extremely horrible hurtful affecting majority and all the people, nation outside the Govt Chambers .....with Death Penalty law to curb done existing murdering plague... and both sides of politicans who is the legislators to be unable to put this law using again.....BUT.....when the Covid -19 pandemic appears on scene where ALL is affected including demselves, then in in blink of an eye dese legislators can immediately immediately, immediately pass legislation, shut down country, corfews, jailing people off streets, not wearing cloth over mouth and nose in car an out of car etcetc.....while people are dying worser by getting murdered and senselessly getting shoot by wutless criminals. This must be the only one country in the world where people dying by homicides, getting murdered bu viscious gangs with guns shooting people, children, babies....and the focus seems not on stopping them...but curfews and legislations to make people wear mask and keep 6 feet apart for just new Corvid-19 disease.