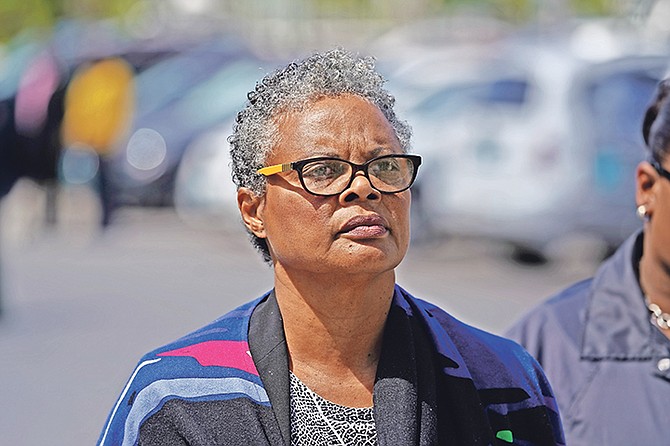 A FORMER Cabinet minister and her son were charged in the Magistrate’s court yesterday with defrauding the Ministry of Tourism of $1.2m.

Chase was also charged with being in possession of a forged document and uttering the same.

Both individuals pleaded not guilty to all of the charges brought against them. Their case was adjourned to March 30 at 10am.

Campbell, who is also a former Bahamian ambassador to China, and Chase were arraigned with Damalus Curry, 38, and Leah Davis, 39, who were charged with one and two counts of money laundering respectively. They also pleaded not guilty to the charges brought against them.

Curry, a businessman, was charged with acquiring $465,000 knowing that it represented the proceeds of crime. His case was adjourned to today at 10.30am. Davis, a marketing executive, was also accused of acquiring $24,000 and $20,550 in September last year during her arraignment.

However, hours later she returned to court and the prosecution withdrew the charges against her.

It is alleged that Campbell and Chase, with intent to defraud, obtained $1.2 million from the Royal Bank of Canada (RBC) with a forged cheque in the name of the Ministry of Tourism, making the amount payable to Campbell-Chase Law.

It is also alleged that the two transferred $512,000 from their law account to a private RBC Finco account in both of their names and then transferred another $24,000 from the same joint account to an RBC account belonging to Leah Davis, among other transactions.

It is alleged that the mother and son also transferred $604,500 from Campbell-Chase Law to their joint account and transferred $465,550 from that same account to Bahamas Outdoor Media.

Both Campbell and Chase applied for bail in the Supreme Court yesterday.

Campbell, an attorney, served as ambassador to China from 2008-2012 during the last Ingraham administration. She also briefly served as minister of state for immigration after the Free National Movement won the 2007 general election.