‘Valour Has No Gender’ For Women Of The Defence Force 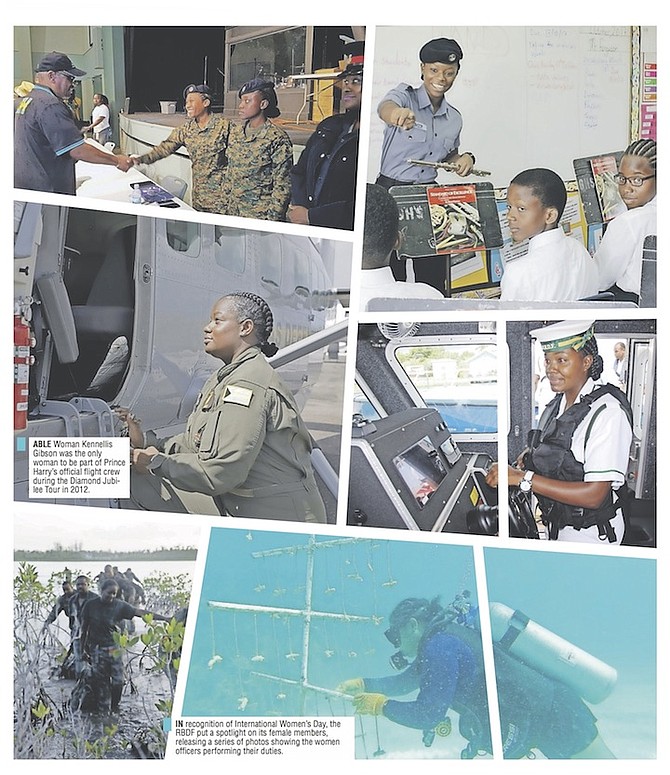 On Sunday, the world paused to celebrate the social, economic, cultural and political achievements of women globally as International Women’s Day was observed.

It was a day to sing the praises of women, give standing ovations to the strides they have made, while also calling for the acceleration of bringing about true equality. The theme for this year’s International Women’s Day was “I am Generation Equality: Realising Women’s Rights”.

Organisations around the Bahamas also joined in commemorating the achievements of women. The Royal Bahamas Defence Force was among those organisations who found it imperative to recognise its female members.

Women first entered the RBDF 35 years ago (the RBDF was established in 1980) and have contributed tangibly to its growth over the last decades. The role of women in the RBDF has significantly changed over the years and today they occupy roles in nearly every sphere of the military force, including the sea-going and Air Wing departments, sickbay, engineering, headquarters, the commando squadron (land forces), and the list continues.

On International Women’s Day, the RBDF put a spotlight on its female members, releasing a series of posts on social media depicting the history of women in the force. The organisation’s official Facebook page was filled with numerous photos of women carrying out their duties.

Able Woman Marine Kennellis Gibson, who has been with the RBDF for 10 years, is a member of the Air Wing department. She considers it an honour to serve her country.

“There are many noteworthy highlights in my career with the Royal Bahamas Defence Force that have remained with me over a decade. However, being selected as the only female to be a part of Prince Harry’s official flight crew during the Diamond Jubilee Tour in 2012 by far exceeds them all. It was an honour to serve my country and execute my duties ensuring that our royal guest was transported safely and comfortably throughout our beautiful islands,” she said.

“In the words of former US President Barack Obama, ‘valour has no gender’. The military is by far the most powerful organisation in all the land. Being employed by a male-dominated institution, a woman must have a great deal of mental, physical and emotional strength to stand in solidarity with her male counterparts...we are breaking the status quo in relation to gender roles in our careers in the RBDF. We are technicians, engineers, divers, members of combat teams and so much more. This is evidence that our reach is vast,” she said.

And of course, women bring something unique to the table of any organisation.

“We are making decisions in a hierarchical organisation and we play a pivotal role in bringing unique perspectives to conflict resolution. Our role is to stand in unity, empower and encourage other women to surpass their limits and even go beyond the masculine boundaries,” she said.

Chief Petty Officer Paulette Higgs said while women are progressing in many areas in the RBDF, she does believe that they, at times, have to work two times harder than their male counterparts to get the recognition they deserve. She hopes this is something that changes in the years come.

“As a woman in the RBDF, I believe that my role is just as significant as a male because we are equally marines. As a woman I find myself giving twice as much to be recognised as his equal, but it feels just as good when I attain my goals. I also believe that once we understand our role as marines, we would stand alongside our male counterparts confidently. On the other hand, there are some things that a female (member) includes in her role that men find difficult because of our difference in makeup and purpose. I believe the female stamina and drive to achieve or prove herself is a great plus to the RBDF, which lends to many of the RBDF’s successes,” she said.

Sacrificing family time is something Chief Petty Officer Higgs had to constantly deal with over the years of being attached to the RBDF ship HMBS Nassau.

“Although was difficult leaving my small children almost every two weeks or up to two months at a time, once I knew that they were secured by the support I had at home, I was able to sail with a professional group of men and women. The bond we enjoyed was comparable to another family. Yet the most exciting part of this was visiting all the major islands of the Bahamas except one – Cat Island – from which I descend. I looked forward to exploring the uniqueness of each island and came to appreciate the Bahamas and my mandate as a marine in the Royal Bahamas Defence Force,” she said.

For Senior Lieutenant Samantha Hart, the highlight of her career so far has definitely been taking command of the HMBS Cascarilla for the very first time.

“The pinnacle my whole command experience was when my crew and I were tasked with transporting Her Excellency Dame Marguerite Pindling, Governor General of the Commonwealth of the Bahamas, to Elizabeth Harbour to view the 66th annual regatta in George Town, Exuma. I think my whole command experience will be my most unforgettable experience of my career because of the exposure it affords as well as the unexpected challenges you overcome onboard,” she said.

Senior Lt Hart believes there is no limit as to how far women can go in the RBDF.

“Bruce Lee said it best: ‘If you always put a limit on everything you do, it will spread into your work and into your life. There are no limits! There are only plateaus, and you must not stay there, you must go beyond them’.

“There are no limits for us… Reach beyond the sky. I’d tell other (women) not to stereotype yourself and fall into the plateau. The RBDF is a sea-going force. Embrace the operational side of it and you will be rewarded with an amazing experience. Never use your gender as a form of excuse. Instead, carry out your role as is expected of you. Also, always think what kind of legacy you are going to leave behind to your subordinates or the next generation to come,” she said.