Walton: 'We Were Going To Get Buddy Back In There' 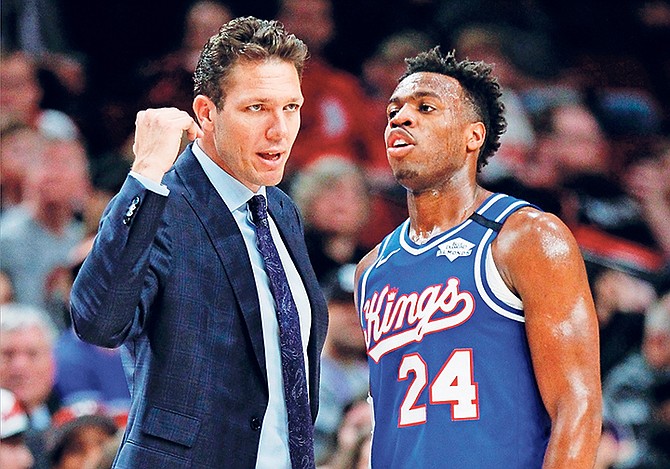 Sacramento Kings coach Luke Walton talks with guard Buddy Hield during the second half against the Portland Trail Blazers on Saturday, March 7. Sacramento won 123-111. Hield sat the entire fourth quarter of the Kings’ 118-113 loss to the Toronto Raptors on Sunday night, prompting criticism of Kings head coach Luke Walton on his management of the rotation. (AP Photo/Steve Dipaola)

BUDDY Hield sat the entire fourth quarter of the Kings’ 118-113 loss to the Toronto Raptors Sunday night, prompting criticism of Kings head coach Luke Walton on his management of the rotation.

A video of a fan chastising Walton’s rotations, most notably benching Hield for the fourth quarter, including a crucial possession as the Kings trailed by three with 13.7 seconds left to play.

NBC Sports California microphones on the court overheard the fan calling Walton an “idiot” for continuing to bench Hield.

“Luke you’re an idiot you have the 3-point champion right there. Play him,” he continued and attempted to raise a “Where is Buddy? Where is Buddy?” chant.

Walton discussed his thought process with reporters following the game. “We were scoring, we really were scoring on every play, we scored 39 points in the third quarter. You score 39 in a close game, and you’re doing enough to win offensively,” he said.

“Buddy, I thought was playing a good game and we were going to get him back in there, and then Bogi (Bogdan Bogdanovic), he started really turning it on and then that group that was out there was really in a good rhythm. So, we stuck with them.”

Hield finished with 11 points in just 24 minutes off the bench. He also added five rebounds and shot 4-12 from the field, including 3-8 from three. Bogdanovic once again got the start and scored nine points in 30 minutes. He shot 4-10 from the field and 1-6 from three.

Hield was moved to the bench on January 24 and has continued his production post-All-Star break after winning the Mtn Dew 3-Point Contest.

In the last five games , he is averaging just under 25 minutes per game and scoring 18.2 points per game on 47.8 per cent shooting from three-point range. “The slow starts, we’ve got to figure that out because we’ve got to rely on our bench to actually get us fighting,” Walton said in reference to the game against Toronto.

“Same thing to start the third quarter. We had to take a timeout and go back to the bench again.”