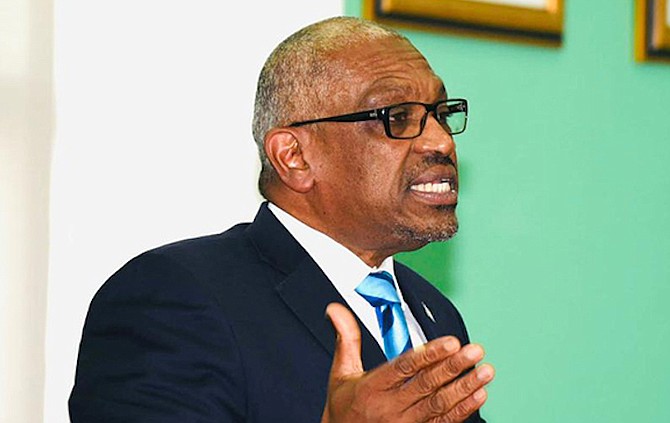 PRIME Minister Dr Hubert Minnis railed against fake news yesterday while discussing provisions in new emergency regulations that make it an offence to spread misinformation if one knows or can be reasonably expected to know the information is false.

Among social media users, the provision appeared to be the most controversial, with critics saying it impinges on freedom of speech.

“The spread of malicious false news has the potential to: cause violence; runs on financial institutions and/or critical food and medical supplies,” Dr Minnis said in the House of Assembly.

“Such fake news may cause widespread panic that prevents citizens from following directions designed to protect their lives during a crisis. Under these regulations, no person shall publish or cause to be published, posted or re-posted over any media platform, inclusive of social media, any purported news or report or purported statement of fact, knowing or having reasonable cause to suspect the same is: untrue or false; or may incite public fear, panic or ethnic hatred.”

Dr Minnis also expressed disappointment that the new regulations leaked before the document was tabled in Parliament yesterday.

“I was very disappointed when I woke up about 4.30 this morning and saw flashed all across the internet, social media, the regulations, proclamations and other legislation that we would’ve discussed yesterday were given to members of Parliament and opposition members and what was appalling was to see that those legislation were leaked and splashed throughout the Internet,” he said.

“That is a complete breakdown of trust. I don’t know who leaked the document but the documents were supposed to be tabled in Parliament today. As leaders how can we ask the general public to trust us when we can’t trust ourselves. By leaking such a document, that in itself could’ve caused panic, fear in society.”

The FNM party is all about fake news.

Ma comrades, if I stop posting - the Royal Constabulary showed up to take me on an indeterminate [One Stop] Bus ride? Can't be writing this anti-curfew stuff. Just, shouldn't

Who would have guessed that Tweedle Dee and Tweedle Dumb would be the first two to post on this article.

Urgency sets in, knowing with each post me outside freedom could become shorter?

lol.u on the run from the blogging police?

And of course Minnis as self-appointed ruler by decree of the police state he wishes to create would be the sole determiner of all information and news that can be publicly disseminated by those he rules over. Really?! This certainly would not bode well for civil liberties and freedoms of the citizenry, not to mention the free press like The Tribune.

It seems Minnis is so thin skinned he now wants to take a page out of the playbook Xi Jinping, the leader of Red China's ruthless communist regime. He no doubt has his minister of national security already investiagting many of us under the "spy" legislation that he suddenly took a great liking to notwithstanding his ferocious opposition to it when it was first tabled by the last government.

Trump goes viral on Comcast reporter and accuses him of sensationalism

But Trump with his national emergency powers didn't threaten the reporter with a heavy fine and/or jail sentence. Even he knows better!

The irony of his speech will make you chuckle.

His government was elected primarily through disseminating fake and unsubstantiated news and reports.. Fast forward 2 years now, his greatest tool seems to be his biggest enemy.

Do names like Leevan "attention attention" Bannister and Omar "ConvictedWithAGovtJob" Archer ring bells? The voice notes are archived for all and sundry.

No worries.. If he thinks Fake News is an issue, wait until it causes him the next election.