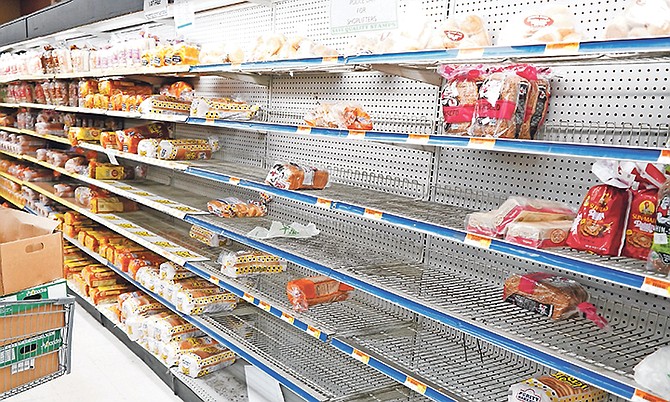 Sparse shelves in a New Providence store earlier this week. But there are still plenty of stocks nationwide.

LOCAL food stores are experiencing a surge of customers after Prime Minister Dr Hubert Minnis announced a national curfew until March 31 between 9pm and 5am to prevent the spread of the coronavirus.

Super Value’s owner Rupert Roberts told The Tribune that the supermarket chain had seen customers in a panic when there was the third confirmed case of COVID-19 in The Bahamas.

“Last night after the curfew announcement the consumer rushed us again but it’s been steady. The sales have been from 100 to 150 percent well over two weeks ago before the panic started. So the public is still panicking and the news makes them panic,” he said.

“We don’t know why we have that adequate supply of food they should just go back to their normal shopping. Yeah, I can almost say we have unlimited supply and we have three months' worth of food on the way.”

As for the curfew’s impact on his business hours, Super Value will continue to be open at seven but will close at five. The staff will have to stay until about 8 pm to restock and in order to be home for the nine o’clock curfew.

“We’re in a meeting now discussing the details but that’s basically how it’s going to work out,” he added.

Bradley Rolle, Centreville Food Market’s assistant manager, reported a 50 percent increase in customer traffic. The store he said had some issues from when a draft of the government’s proposed emergency bill was leaked onto social media.

He is bewildered by the public continuing to panic buy after the Prime Minister advised citizens not to.

Mr Rolle said: “There’s no need to be stockpiling and all this kind of stuff. This is not a situation where ships are not coming in and the suppliers don’t have the food. They're not listening to that. I guess this thing about a curfew and lockdown from nine to 5am, I don’t know … people figure they must have their homes filled up with foods.”

He feels Bahamian’s lack of experience with an outbreak like COVID-19 is what is causing them to behave in such a way.

“My thing is that this situation with the state of emergency and the curfew, The Bahamas has never experienced this. Our people for the most don’t know what this really all about. It’s the practical part of this it’s what’s going to really hurt us in the long run.”

“In the next 11 days from now they may have some more infections.”

Since there are so many people queuing, Mr Rolle is considering closing the door temporarily and allowing 50 people in at a time to prevent the spread of the disease.

Manager of Parkgate Marketplace William Chan is limiting people who come inside as well as encouraging people to sanitise their hands before continuing to shop. He has mostly seen shoppers buy “a little of everything” and is trying to cap the number of items people can buy.

“Right now the only limits we have are on like water – cases of water. We give them two cases of water, toilet paper. We’re limiting, depending on the brand, one to two packs and hand towels. We’re trying to spread certain brands out to maybe like two or three rows.”

“Recently most people are understanding before the official announcement. There were some altercations between people. Like we're trying to limit people so that everyone can get their fair share. Some people were a little aggressive in trying to get items, but we do have security to help with those problems.”

The last thing you need is bread. Remember obesity and hypertension are risk factors. People need to panic buy some skipping ropes.

seriously, if there was a food shortage which it doesn't appear that there Is, bread is better than air.

Despite having more access to information people, are more irrational and emotional in the face of this threat. The curfew is from 9PM to 5 AM which means the grocery stores will still be open during the day. Hoarding is unnecessary as items are still being brought in through customs.

The only good thing is the, hoarders have limited space in their homes so their ability to continue buying is limited!!

This means we shouldn't hear Rupert complaining about losing money, when this all dies down.