Insight: With An Economy On Its Knees, Straight-Shooter Sol Arrived With A Dream 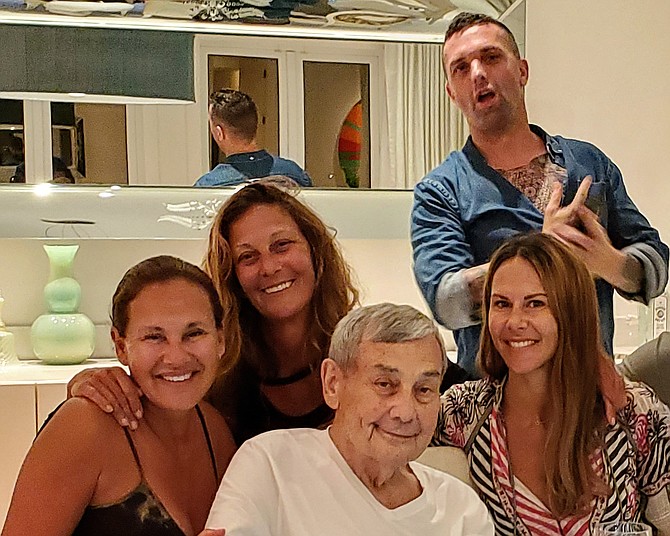 Sol Kerzner with, from the left, daughters Andrea, Beverly and Chantal and son Brandon.

The Bahamas economy had been in recession for two consecutive years when my first government came to office in August 1992. Unemployment was at 14.8 percent, the highest level since the 1970s and our foreign reserves were at $145.9m, the lowest level in a decade.

Tourism was and is still today the growth engine of the economy; and our entire tourism product was crippled by August 1992.

Construction on the new US Terminal at the Nassau International Airport had stopped because the government had run out of money. Government owned 20 percent of the country’s hotel room stock; Resorts International on Paradise Island was in bankruptcy and Carnival Crystal Palace Hotel in Cable Beach was for sale.

All our hotels were generally run down and occupancy rates were dangerously low. Both Carnival and Resorts International had been forced to resort to running their own airlines to bring guests to their properties. Bahamian hotel workers were working only two and three-day weeks. Bahamian vacation packages were being offered at bargain basement prices. Getting the stalled tourism engine restarted was our top priority.

It was very clear to us that we would have to vigorously pursue a strategy for economic growth if we were to pull the country’s economy out of the negative tailspin in which we had met it. We quickly recognized that the government alone could not fix the problem.

We set out to upgrade public infrastructure and to revamp the investment climate creating an environment conducive to expanded private sector investment and hence, job creation by the private sector. We updated and published for the first time, a national investment policy that was meant to cut out the middlemen and influence peddlers that had severely compromised our investment environment; we updated incentive legislation and repealed the immovable Properties Act; and we created the Bahamas Investment Authority (BIA). We told the world The Bahamas was open for business and we were making it better in The Bahamas again.

Sol Kerzner was an early responder. I remember that among his team on his first visit to my office in 1993 was his son, Butch, an American trained banker whom he was clearly grooming for future leadership in his company. There was great affinity and great respect between the father and son team.

Kerzner was a straight shooter, a successful hotelier; he was not flashy. I was impressed that he very early disclosed the difficulties he had encountered in connection with his development of the major Sun Resort in a South African township involving allegations of payments of bribes. He offered to provide references from well-respected international persons who believed him to have been the victim of circumstances. The fact that Nelson Mandela, just recently released from 26 years detention in South Africa, vouched for him and for his company’s non-racist stand carried considerable weight with us.

He gave me every assurance that all his business dealings in The Bahamas would maintain the highest ethical standard. We made clear to him and to his attorney that they were never to approach the government through intermediaries, lobbyists or influence peddlers.

I found that we were on the same page. His quick understanding of our economic dilemma and of our interest in not only stimulating but maximising job creating investments gave me and my government confidence in him and his ability to partner with us in moving the tourism sector forward.

More and better hotel rooms would require additional air lift to Nassau. In turn, increased airlift would increase revenues for the Nassau International Airport. Increased passenger loads would increase demand for taxi transfers to hotels and increased visitors would translate into increased customers for straw vendors, artisans, retail stores, and increasing patrons for restaurants and dance and entertainment clubs. Moreover, increased business would increase employment and increased employment would grow the country’s tax base and make it possible for my government to institute very real reductions in some taxes – customs duties, for example but also increases in real property tax exemptions for owners of medium range residences.

Sol, a brilliant hotelier, saw the opportunity that Paradise Island presented under a new transparent investment climate and he bit. He brought along renderings of how the existing Paradise Island hotels would be modernised and how pirate ships and pirates would be woven into a new water theme park. He showed us a video of the Resort in South Africa and said he would do the same on Paradise Island.

That pirate concept soon gave way to the Lost City of Atlantis and the rest, as they say, is history.

My special relationship with a brilliant man

In 1995 I was a 20-something fresh from Exuma hustling in the transportation business. Alan Lieberman along with the executive team of Atlantis introduced to the man who would change my life and the lives of many Bahamians for ever - Solomon Kerzner. Sol Kerzner reinvented tourism and our tourism product in The Bahamas. He believed in us and we believed in him. Who would ever believe a white man from South Africa, during the time of apartheid would make such a significant culture change of entrepreneurship and value in The Bahamas? I am one of many touched by his story.

Everyone who worked at Atlantis during the time I was there knows how close Sol and I were. To this day I call him Dad. Yes, he was. For the ten years I had a relationship with Atlantis and the years beyond to now, we maintained a special bond. A special relationship. My success in life is because I listened to Thomas Dorsett and Sol Kerzner. My failures in life are because I did not.

My love for you Dad seems limited in expressing my gratitude to you.

In fact, he invested $145m in the renovation project, a significant sum at the beginning of the last decade of the century.

Sun International (later Kerzner International) introduced a new, upscale clientele to The Bahamas on a scale never before imagined.

Before Sun International the wealthiest tourists coming to The Bahamas were a small select number reserved to enclaves at the Ocean Club, Lyford Cay and other mini facilities on secluded places as had existed from time to time in Cat Cay, Eleuthera, Harbour Island or Abaco or Exuma.

But Atlantis brought Fortune 500 type executives to The Bahamas in the hundreds if not thousands – with their families. Atlantis renovations created hundreds of construction jobs and new permanent jobs in the economy when it opened in December 1994.

By the time Kerzner invested another $250m (between 1996 and 2000) in the construction of the Royal Towers, Sun International was responsible for creating as many as 2,500 new permanent jobs at its resort facilities.

We believe the impact in the wider economy was also spurred on and supported by the fact the FNM government changed the rules under which investors operated in The Bahamas.

We wrote into our Heads of Agreement with Sun International (and subsequently with every other hotel investor in The Bahamas) a requirement that Bahamians and Bahamian products had to be used in the construction and operation of any project receiving government concessions.

Those increased linkages between hotel development and other sectors of our economy using Bahamian professional services, in the local sourcing of agricultural and fisheries produce and in decorations and appointments of the resorts substantially improved the net benefit of tourism to the domestic economy.

Kerzner’s resort also opened the door for effective joint ventures with Bahamian contractors, for architects like Jackson Burnside, for manufacturers and skilled artisans and later for small businesses who supplied uniforms for staff, pillows and mattresses for guests’ rooms, sea food and condiments for restaurants – few of these people were directly on Atlantis’ pay-roll but they all had some income which could be traced to Atlantis.

This allowed Kerzner to close the small Paradise Island airport opened to bring tourists directly to the island as airlift to Nassau had fallen in the 1980s. He converted the real estate into an exclusive gated community – Ocean Club Estates. I am convinced that Kerzner’s success encouraged investments and upgrades throughout The Bahamas, convincing many potential investors to make the commitment and enter The Bahamas for the first time, or to expand their existing investments in The Bahamas.

The impact of Kerzner’s investment were felt beyond his properties on Paradise Island and included the whole hotel sector and indeed our wider economy as well:

• Improved quality in our hotel product is now widespread, in imitation, Kerzner would perhaps say, of what other operators saw in place and working at his properties.

• Improved training and retraining programmes available for workers in the hotel sector at Kerzner’s hotel properties visibly improved service standards - in hotels, in restaurants and in the retail sector; this was not been lost on other hotel operators nor on our local retail merchants.

• New construction techniques employed in the creation of Atlantis’ imaginative water, stone and landscapes, pools and facades have been transferred to local talent as became evident in the many construction projects around New Providence.

• Infrastructural upgrades, particularly to Paradise Island roads lined with sidewalks and attractive lighting and the construction of the underpass below the Atlantis marina demonstrated what could be accomplished beyond the Resort

• Increased local sourcing of furnishings, finishings, and foodstuffs - sea food, fruit preserves, jams and condiments in particular - has spread to other resorts and restaurants fueled a growing cottage industry.

• The impact of Kerzner’s introduction of Bahamian original artwork on its properties is immense. This practice has also been adopted and expanded upon by growing numbers of hotels around the country – very markedly by New Providence’s newest mega hotel resort Baha Mar.

Truly Sol’s contribution to The Bahamas is a wonderful story.

Wish you were here!

God bless you and your family.