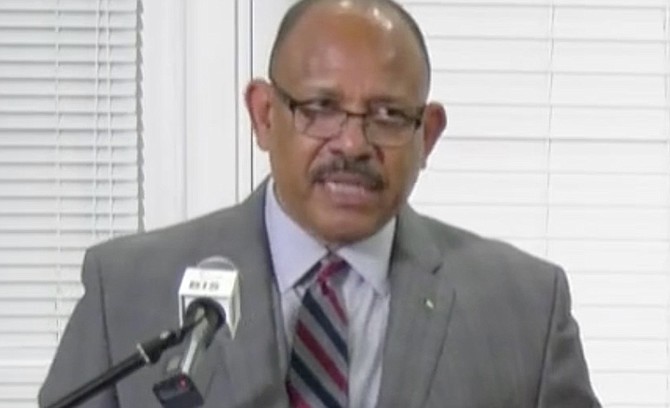 THE number of confirmed COVID-19 cases in the country has risen to nine, Health Minister Dr Duane Sands announced yesterday after revealing that four more people in New Providence had tested positive for highly contagious disease.

One of the new COVID-19 patients had a recent travel history, Dr Sands said. The four new cases are at home in isolation and do not need hospital care at this time, he added.

“The most recently four confirmed cases are in New Providence,” he said during a press conference at the Ministry of Health. “Only one had recent travel history and that case had traveled to the Dominican Republic on the 13th of March.

“All of the most recently confirmed four cases are in home isolation and they are being closely monitored by healthcare professionals,” he said. “They do not require hospitalisation at this time.”

His comments came after officials revealed on Tuesday that a woman in Grand Bahama with no recent travel history had tested positive for the infectious disease, becoming the country’s first confirmed case of COVID-19 outside of New Providence. Up to press time, there was only one confirmed case in Grand Bahama.

Health consultant to the Office of the Prime Minister, Dr Merceline Dahl-Regis, said the new cases are not linked to the previous cases, but noted that two of the patients are close friends.

“The new cases are not related to the first case…,” she said.

“They’re not, except two of the cases are related in friendship and companionship, but the other new cases….So, there’s five. The one in Grand Bahama is not related to the index case.

“(Of) the four new cases, two of the cases are very very close friends,” she said.

Meanwhile, as it relates to the other COVID-19 patients, health officials said yesterday that all remain in stable condition.

“The first case has been discharged through hospital and health officials continue to follow the condition of the three other COVID-19 positive cases in New Providence (that were previously reported),” Dr Sands noted yesterday.

“And the single case in Grand Bahama, who all remain in isolation at home and do not require hospitalisation at this time, they are in stable condition.”

Dr Sands added: “Contact tracing is aggressively underway by the MOH surveillance unit in New Providence and Grand Bahama. The surveillance unit has already contacted the large majority of those who were in contact with the initial case.

“The MOH surveillance unit will use an advanced approach to increase the number of contacts reached in the shortest possible time. We continue to closely monitor patients in their home quarantine environment.”

With over 2,000 testing kits currently on the island, Dr Sands said nearly 200 people have been tested for COVID-19 so far.

“At this time, 175 people have been tested in the Bahamas for COVID-19 following agreed international protocols,” he noted. “To date, we have some 2,300 testing kits on the island. More than 60 ventilators are here and more are on the way to increase our current capacity.

“Thousands of PPE (personal protective equipment) kits have been ordered to reduce the supplies that we had already had in stock; 3,000 additional are expected on the ground on Monday and a further 4,000 will be here by the end of next week.”

In the meantime, the health minister is urging members of the public to take the necessary health precautions to prevent the further spread of the disease.

He said: “COVID-19 remains a very serious threat. Around the world, more than 23,000 people have died from this virus. It is very important to address you today about prevention and it’s important that you listen to and follow this advice.

“There is currently no vaccine to prevent COVID-19.”

In an effort to combat the COVID-19 pandemic, Prime Minister Dr Hubert Minnis last week imposed several stringent measures in the country, including a 9pm-5am curfew until March 31.

However, on Monday, the curfew was extended to 24 hours.

Attorney General Carl Bethel said the curfew could be extended for at least another 14 or 30 days to further clamp down on the virus.

However, he said the decision would be based on the advice of medical professionals.

Asked by reporters yesterday if health officials felt the curfew needed to be extended, Dr Sands replied: “We have made the determination that we’re going to monitor this situation very, very closely. At this point in time, we will advise Cabinet colleagues, the prime minister and all stakeholders how we believe the impact of the initiatives, the interventions have been.

“So, I think it’s premature at this point for us to tell of the position the MOH and health team. Every single day, we will advise those in authority as to what our realistic thoughts are on how this whole thing is going, so stay tuned.”

Symptoms of COVID-19 include cough, fever, tiredness and difficulty breathing.

Great good luck to every one and a full and fast recovery! God Bless.

Let's hope they stay at home.

The real problem assessing numbers of cases is that people are calling the hotline reporting fevers and coughs and are being told to stay at home and self isolate. They are not being referred for testing. The numbers must be higher than reported!

The "Stay at home and die policy" undoubtedly means there will be less testing done for the Red China Virus. This should result in fewer deaths being attributed to the Red China Virus when all is said and done, which in turn will help with important statistical reporting to the rest of the world by our government. Remember, our government only ended up acknowledging 80 deaths caused by Hurricane Dorian after a very slow selective accounting process over a long period of time. A corpse not found was not counted. In the case of the Red China Virus, a corpse not tested before death presumably will not be counted.

Like I've said before, it's not practical to test everyone. If you test them once does that mean they shouldn't be tested again in the future? Just because you test negative, doesn't mean to say you can't catch the virus the next day. There just aren't EVER going to be enough test kits in the whole of the world to test every person every few days for the next umpteen weeks. That is why all countries are being selective. Unfortunately most of the symptoms of COVID-19 are identical to the symptoms of a head cold and/or flu. In the Northern Hemisphere we are still in the middle of flu season.

… asymptomatic people should not be tested unless they have been exposed or have medical conditions that could cause more serious outcomes, but people with symptoms including fever are NOT being tested in some instances and simply being told to remain home in unmonitored self isolation. Who knows if they are standing next to you in a line at the grocery store! This is unconscionable!

Infection rate in Texas for example, is currently only 0.0034%

80% of them will only have mild or few symptoms...

What number of people die when unemployment goes up by 1% ??

No judgment as I don't know enough about true data on Corona, but just asking really important questions.

Can you idiot trumpies please just shut up?

There are currently at least 1600 confirmed active cases in Texas, and although this is a minuscule fraction of the entire population, it's doubling every three days. If more strict isolation isn't quickly adopted most of the population will be infected in a month and there will be 300,000 dead. There's very little evidence that sustained unemployment will kill even a single person (https://www.history.com/news/great-de...">https://www.history.com/news/great-de...)

What tells them that who they have is not patient zero for The Bahamas?

At least two of the newly infected worked in a public space where they were exposed to others. The infection rate among populations can be as high 80 percent with as much as 30 percent becoming seriously ill. This far this hasn’t been the case among the Bahamian population. Unlike New York who’s cases grow exponentially. In fact they expect they will need 1 million ventilators and many more hospital beds than they can locate.

America’s biggest problem is they have a president who wants to ignore the medical experts and rush to reopen the country. Medical doctors are at the helm of this country’s leadership and understand the consequences of making this grave mistake. They also have the forth of getting advice from China who is now reopening their country.

Well John you must surely know going lock down road much longer will poor house everyone if not in that position already. Open the country and let the chips fall were they may. Cure is worse than the disease.

That is why government must not only look at infections but recoveries and cases of demise. If the normal population has the ability to resist the virus and recover from it then the decision will have to be made to allow them to return to some sense of normalcy and earn s living. And only put heavy restrictions on high risk persons, while keeping the boarders closely guarded. Else the financial devastation will be more deadly than the virus. There was no need to implement lockdown on small sparsely populations in the Family Islands. And who are the idiots who decided to arrest, lockup, charge and fine homeless persons rather than taking them to shelters. All under the pretense that the effort is to save lives! Police must also be reminded that persons have rights to go out for food and medicine. So if they on the street going to Social Services for food vouchers it going to a public clinic they should not be harassed by the police and told to return home.

I live in one of those sparsely populated family islands and once we have passed the 14 day incubation period there is no reason with all ports and airports closed that the lockdown can not be lifted. This ban on public beaches makes no sense here either as I rarely encountered another human being in my excursions to the beach.

'Divide and conquer' has gone to a whole new level known as 'isolate and demolish'.