'I'M Afraid And Worried. I Just Feel Like I'M In A Hole Even Talking About This' 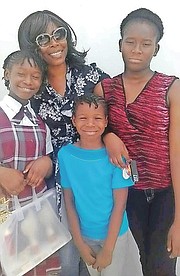 Juliet Dann, a mother of four who lost her job during the COVID-19 crisis, is desperate to look after her children but needs help.

LIFE for Juliet Dann has never been harder than it is now.

The 48-year-old is caring for her four children, including one who is suffering from a debilitating eye disease in the United States, while sometimes living in a house without necessities as basic as toilet paper.

She doesn’t have a TV nor a radio and told The Tribune yesterday she cannot keep up with the news.

Her bed lacks sheets and her place is secured by a glass door that can easily be broken.

Like many, Ms Dann lost her job during the COVID-19 crisis.

“I went into a depressing state,” she said. “I felt like a feeling of suicide was coming on me, I felt it very strong, like overpowering me. I called a person and he advised me and told I him what’s happening to me and he rebuked it in the mighty name of Jesus and then I called a couple of pastors from overseas and they prayed for me and it calmed. I’m in a better state now but I’m devastated.”

As a maid and cook, Ms Dann worked day and night to take care of her family before COVID-19 got in the way.

“I was working really hard, double shifts," she said.

Most of the money she made went into an Asue. She was expected to use its $3,000 payout to take care of her most pressing needs. But the Asue's other participants have dropped out because they too are now unemployed and Ms Dann has been left with no payout and lost savings.

She has found most people less than accommodating to her needs.

“Nobody owes me nothing, society doesn’t owe me anything, but I’m just pleading for assistance for the children’s sake," she said. "I’m putting myself out there and I’m not comfortable doing so because I’m afraid and worried. I just feel like I’m in a hole even talking to you about this, like God am I doing the right thing?”

She said she is reaching out for help because of her children.

“I have to take drastic measures to get help because I’m looking at their future. They’re my kids, they’re born here, they have a Bahamian parent and it is for their sake I do everything.”

Despite an order that evictions be halted until the end of June, Ms Dann said her landlord has threatened to take action against her. She said she is afraid.

She said a woman gave her $130 last week Friday that she gave her landlord. She said she then borrowed $150 from a man on Monday and also gave that to the landlord.

“The person who lent me the money said I must pay him back, but I don’t have it to give. The landlord say I must work on the rest to give him but I have no money. I’m supposed to give him $370."

The children in Ms Dann’s household are ages 16, 10 and 14. Her 28-year-old daughter in the United States has keratitis.

“She can’t see from her left eye,” Ms Dann said, “she can only glimpse out of her right eye. I have to take care of her, pay her rent, find her food and cover her doctor bills and whatever. She was working before she was diagnosed but since then she can no longer do anything much for herself. She tries to but she cannot see well so I took it upon myself to help her. Before the shutdown I was able to send her some money. When I called her she said some lady offered her some assistance but that woman is not working either. My daughter told me she wants some grocery so I keep calling around to see if I could get her help. If I get sorted out I know I can help her.”

Surveying her room, Ms Dann sees a life she desperately wants to leave behind.

“I’m living in a very poor situation, life is very hard,” she said. “We need some food stuff, we need toiletries, we need toothpaste, we need bath soaps, we need gas, we need pads, I need a little stove. My daughter picked up a fan from outside and we are using it and it’s like the fan is blowing hot air so it’s not really working and summer is coming. It’s a challenge raising these children. If I could get some help that would be great. They are very intelligent, they are beautiful, they mean a lot for me and I really really want to do what’s best for them, I don’t want to be in this room for them, you hardly have space in this room but I can’t do no better, we just have to settle for this.”

If you would like to help Ms Dann, please email rrolle@tribunemedia.net.

Disturbingly,1000's of people find themselves in similar positions with nowhere to turn for help. Many 1000,s of people have yet to receive any assistance from NIB. While the government promises that no one will go hungry, 1000,s of people are hungry and facing evictions today!

A tidy solution here would be to simply pause all rent and mortgage payments for the duration of the crisis, and restart afterward without any repayment. Homeowners and renters would be secure, and landlords would be mostly fine as well since mortgages are typically by far their largest expense — plus it would be much easier to administer without any complicated means test.

Those fortunate enough to collect NIB stipends can then use them for other basic essentials like food, toiletries, and utilities.

Hopefully, someone quickly throws this poor lady and her family a lifeline.