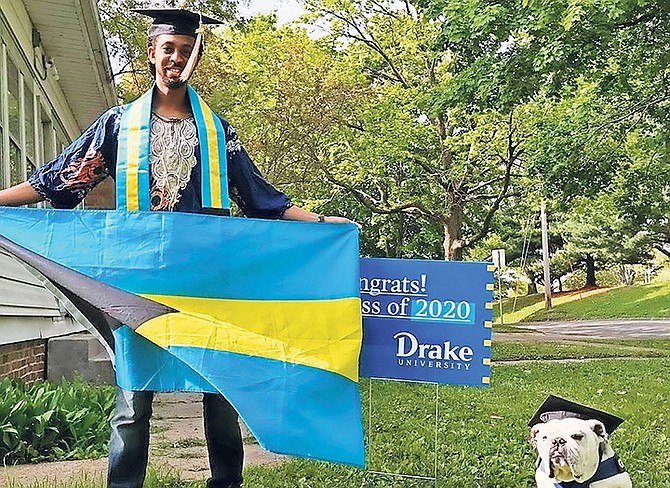 THE VERSATILE ONE: Michael Cooper Jr has graduated from Drake University. The virtual ceremony took place on Saturday in Des Moines, Iowa, as he received his bachelors degree.

It took a little longer than expected, but after five years of juggling his time and energy in academics, sports, church and the community, versatile, multi-talented Michael Cooper Jr has now graduated from Drake University.

Cooper Jr, 24, is in Des Moines, Iowa, where the virtual ceremony took place on Saturday as he received his bachelors degree with three majors, all while concentrating on playing tennis, running track, and leading out of praise and worship at New Life Center Church, where he also performed on the keyboard. 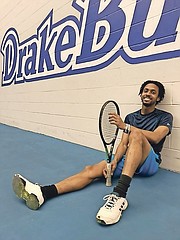 “I am just glad that I graduated,” said Cooper Jr, who is now waiting on his card to continue to remain in the United States so that he can join the work force. “I feel grateful that I got the experience.

“It’s all glory to God because there was times when I didn’t know how I would make it, but God just came through and provided for me. That’s why I am relieved that it’s all over and done with.”

Schools in the United States are currently shut down because of the spread of the coronavirus. As a result, graduations are taking place this month by virtual ceremonies as the social distancing rule is being enforced.

While there was a three-part, 35-minute ceremony that he had to go through, Cooper Jr said he could hardly wait for his segment to take place. He said his segment of the ceremony took about 15 minutes as his name was called and he got his degree in Business administration with three majors in actuarial science, data analytics and information systems.

“I didn’t even see where the money was coming from to complete my studies because I wasn’t on a scholarship. I was a walk on for the tennis team and when tennis was finished, I went out to track and made that team too.”

Now, Cooper Jr said he has received a number of calls from persons seeking his services in the IT field and even data analytics, so he’s just waiting to see how everything will work out.

Having graduated from Kingsway Academy in 2014 where he starred on the Saints’ track team, Cooper Jr spent a year at home before his parents, Julie and Michael Cooper Sr, finally got him sorted out to go to Drake University in Iowa in 2015.

“It was a challenging experience for me, not just in the classroom, but socially being on the tennis team, running track and getting involved in church and the community,” he said. 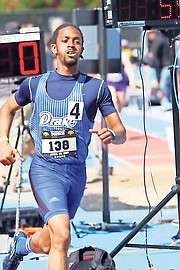 “There was a lot of excitement, disappointments and moments where I didn’t want to get up. I was just tired of track practice and having to finish homework. I just had to keep on going and not pay attention to how I felt. Some days I just felt that way, but I managed to push through it and I got it done.”

While his appearance on the court for the Bulldogs’ team was limited in tennis, Cooper Jr managed to run around two minutes in his specialty in the 800 metres on the track. But when he joined the church, he started out playing the keyboard and eventually led out in Praise and Worship, served as a Youth Councilor and assisted in mentoring foster kids in the community.

“I couldn’t play cards with everybody. I had to manage my time properly,” he pointed out. “I had to prioritize my time so that I could do all of the things that I did, although I didn’t do all of them at the same time.”

From his freshman year, Cooper Jr said it was a struggle, getting adjusted to the collegiate life. But it wasn’t until he had settled down that he decided to pursue tennis in his Freshman year.

He made the team in the ninth spot and although he only played one singles match, the exposure that he got from being a part of the team was something that he will cherish, considering the fact that he played tennis under the Bahamas Lawn Tennis Association and every opportunity he got to return home, he assisted in coaching and officiating the game.

“It was tough because we had a really good team,” said Cooper Jr about earning his berth on the tennis team. “The other guys there already knew the system.

“But coming from the Bahamas, they expected that I could play. I didn’t get to practice or prepare before I tried out for the team. I believed if I did, I could have played much higher.”

Although his focus will be getting a job, Cooper Jr said he intends to do some coaching with the community in Des Moines and will participate in some open track meets and cross country events.

As the younger sibling to Jamaal and Mikia Cooper, both of whom also played tennis, Cooper Jr said he’s just delighted to have been able to participate in both tennis and track at the collegiate level.

The BLTA extended their congratulations to Cooper Jr.

“We are happy for him and are extremely proud of his achievements,” said Esther Newton of the public relations committee.

When asked how he was dealing with the coronavirus in Iowa, Cooper Jr said it’s not a major problem because when they had the outbreak in the USA, there was only about 10 cases in the city of Des Moines,

But he noted that it’s in the hundreds because the numbers increased after so many people went out to the market and it caught like wildfire.

“Things are slowly getting back to normal and they have opened up the Churches, but a lot of people are still not coming back yet,” he said. “There are some Churches where they only allow a limited amount of people to come, so they are taking the necessary precautions.”

Having being preoccupied with school and trying to graduate, Cooper Jr said he spent a lot of time at home in the room that he rented off campus. He also had an internship with a transportation company, but because they didn’t set it up for him to work from home like everybody else, he had to go into the office where he was stationed by himself.

“When I wasn’t working, I was by myself,” he said. “I actually only went to the food store about three or four times. Other than that, I did a lot of pick up or delivery services.

“I just kept to myself for the most part because there was really nobody that I could hang out with because everybody was at home and there wasn’t any activities going on for me to attend anything. So I just stayed to myself”

To the Bahamian people as they continue with the 24-hour curfews and weekend lockdowns, Cooper Jr advised them to do a lot more soul searching as they wait on the Bahamas government to slowly reopen the economy, having only just about 100 confirmed cases of the virus recorded and 11 deaths so far.

“This is a time to be innovative and to seek the face of the Lord,” he stated. “You have more free time on your hand, so use it wisely. Trust in the Lord and he will direct your path.

“I also want to say that more could be done from the government side to make it easier for the people. I think they could be opening up more businesses. They are opening up in the United States, but they are still being aware of what is going on out there. I think the Bahamas could be doing the same thing and not be so strict.”

Cooper Jr, in the meantime, said he’s elated that through the outbreak of the pandemic, he was able to come out shinning with his three majors and as a deep thinker, one who made a difference in the lies of those he came in contact with.

"My battles has only proven that I am lost without God and that I am nothing without Jesus Christ, who has breathed his life into me," Cooper Jr said. "During my time at Drake, I was not the spotlight person on the tennis or on the track team, but I was the athlete who impacted people's lives on and off the court.

"My college journey was not always a smooth one, but by God's grace, I overcame many physical, mental and spiritual battles that has made me a better person."