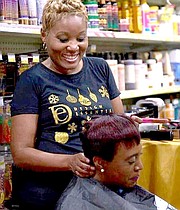 Tiffany Rolle working in her salon.

INSTEAD of celebrating the 20th anniversary of their business, Tiffany and Raymond Rolle had to face the harsh reality of closing their salon’s doors permanently, due to long arms of the COVID-19 pandemic.

Non-essential businesses were closed from mid-March, most of them up for re-opening during phase 4 of the Prime Minister’s plan for restarting the country’s economy.

“We were trying to hold off on it, but I told my husband to be in phase 4 this is going to be a long rope so we are going to decide to bail out of this now and just round it off to 20 years,” Mrs Rolle said.

“The day we had to shut down, we were really booked out as our salon usually is,” Mrs Rolle continued. “We had to call clients who had scheduled appointments for that Friday and Saturday and tell them we would have to get back to them based on when the country reopened. At that time we were looking at April. As you can see that didn’t happen.”

The couple continued to watch time pass and their bills add up. They decided closure was the only way out.

“We are renting a shop space,” Mrs Rolle explained. “And, although closed, the overhead was continuing. I had a meeting with my booth renters and I told them if we go into June still closed we would have to shut our doors permanently because the store is me and my husband’s only source of income. So we said keeping ourselves afloat and trying to hold on to the store and hold on to our home expenditures we could push it until May, meeting the overhead expenses for the rent, the light, the phones and any additional bills for the store.”

Mrs Rolle said she and her husband listened to Prime Minister Dr Hubert Minnis’ national address, and noted that salons are not yet given the greenlight to reopen. She then decided with her husband to close down the salon as they could not afford to go into another month with the bills.

“We could not go into June with overhead expenses from the shop and with a mortgage to pay for our home,” she continued. “So we wrote up letters and told everyone that we are permanently closing the store. We had to bail out now, because if we are listed to reopen in phase 4, that could be in July because he (prime minister) didn’t give a definite time. The good thing is that I have my talents in my hands and my husband has his talents in his hands so it’s not the end of the road for us.”

Mrs Rolle said it is better to close down early in the game than later and be in debt “up to our heads”. The couple notified their landlord of the closure, told the booth renters to collect their equipment and then asked BPL to shut down the power to the store.

The average light bill per month for Styles Unisex Salon was $3,000, more than the couple’s mortgage. She said, although grateful for the NIB unemployment benefit for business owners, it was still not enough to take care of their bills and keep the shop afloat until reopening.

Styles Unisex Salon opened its doors on May 4, 2000, and has since grown to a staff of ten who are now considered family.

“After making the decision, we reached out to our customers,” Mrs Rolle said. “I was on our Styles Salon page on Facebook and I reached out. I also sent messages to them. It’s a sad thing that everybody is going to have to fight for themselves who worked in the salon. It’s sad because we became a family and some of us were working together for more than 20 years. We started out in the industry together.”

Mrs Rolle said she and her husband might attempt a smaller operation at a later date.

Don't give up guys! Surely your lanlod will forgive your rent for the period you were closed. If he/she is unable due to their own mortgage commitments, ask the Doc to have a heart and reach into his own pockets to assist. If you have credit card bills, I am sure he will be more than happy to assist with those as well!