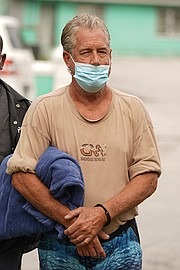 AN American boat captain yesterday denied a string of firearm and ammunition possession charges after he was accused of opening fire on officers during a shooting incident in Green Turtle Cay, Abaco, last week.

Tellam, who is from Stuart, Florida, denied all the charges and the case was adjourned to September 22 for trial.

After denying the charges yesterday, Tellam was denied bail. His attorney Jomo Campbell indicated his client was in the process of applying to the Supreme Court for bail.