DIANE PHILLIPS: Add his name to the list - George Floyd, another victim of American  racism which won’t go away 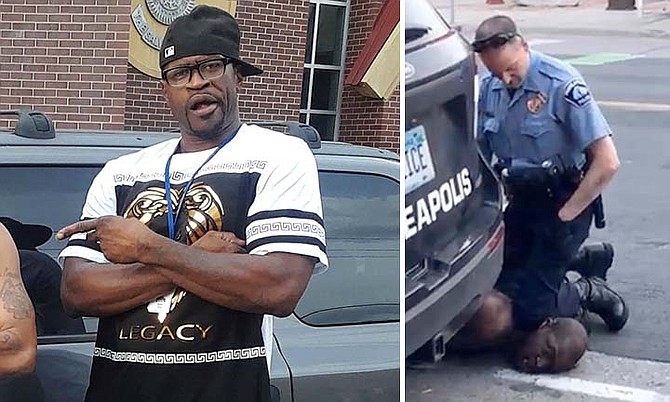 The statistics have been there all along. You can read them if you have the courage to digest. You can study the charts, hot spots, numbers, watch the nightly news, gasp at coverage and go about the rest of the evening as if nothing changed if you have a mind to.

But two events in the last week shook us in a way that is undeniable. They drilled a hole in our hearts and drove the tragic reality of racism in America home in a way that no decent, caring human being can deny.

On Monday, May 25, four Minneapolis police officers stopped, handcuffed and arrested George Floyd, an unarmed black man suspected of attempting to pass a counterfeit $20 bill. A bystander shot video – up to nine minutes of slow torture as officers hauled him to the ground next to a police vehicle, one thrusting his knee into the jugular vein of his neck, choking him, blocking his airway as he begged them to let go, his words “I can’t breathe” clear at first and getting dimmer until they could be heard no more.

Witnesses begged police to stop. By the time they did, it was too late. Floyd was dead at 46. He may not have known the $20 bill was fake. It doesn’t matter.

The officers were fired. The FBI is investigating to see if they should be charged with a hate crime. The mayor asked why the officers who killed Floyd were not in jail. If it was not murder, the infuriated community said, what do you call crushing your knee into the neck of an unarmed, handcuffed, motionless, moaning man on the ground in front of a squad car until you have squeezed the life out of him?

Archie Williams, who spent 37 years in prison for somebody else’s crime, had the America’s Got Talent audience in tears as he sang Elton John’s Don’t let the sun go down on me.

A day after Floyd was killed by police, a man in an ill-fitting, shiny new grey suit walked out on the stage of America’s Got Talent. He was big and tough though you could see him tugging at the jacket, unaccustomed to being dressed like that. With strong jaw and questioning eyes, he was strangely quiet for a moment when Simon Cowell asked him the usual questions he asks of every contestant – what is your name and tell us a little about yourself. “My name is Archie Williams,” the man said and grew quiet again. “I was just incarcerated for 37 years for somebody else’s crime.” Three thousand people in the audience opened their mouths simultaneously in shock.

When Archie Williams told the story and began to sing Elton John’s ‘Don’t let the sun go down on me’, you could have scanned that audience for a single dry eye and failed.

Williams was a young man in Alabama, poor and black, when a white woman was raped and stabbed in 1982. Pressure was on the law to catch someone and they nabbed Williams who could not believe he was being charged. His fingerprints did not match any at the scene of the crime. Three witnesses testified he was at home. There was no DNA evidence nor anything else linking him to the crime.

Too poor for a lawyer, he was thrown into the toughest prison in the state, Angola, to serve life plus 80 years without parole. Singing and prayer kept him going. The Innocence Project learned of his case, took it on and with DNA evidence and another man’s confession - a serial rapist - the Innocence Project freed Williams in eight hours. On March 21, 2019, he walked out of prison a free man, but a man who had lost 37 years of his life.

How many Archie Williams’ are out there?

What would have happened in the George Floyd case if a bystander had not shot and shared a video?

How bad is it?

A report released in 2019 showed that while property crimes decreased in the US the previous year, hate crimes and violence hit a 16-year high with Latinos experiencing the highest upswing. In 2019, there were 7,120 incidents of hate crimes, including thousands targeting buildings.

Cops who face stress daily are often among those who pull the trigger too fast with a black face in front of them and the words Black Lives Matter out of earshot. There were only 27 days in 2019 when police did not kill someone in the U.S. and blacks are more than three times as likely to be killed as whites with Latinos running a close second to blacks who accounted for 24 percent of those police killings despite being 13 percent of the population.

There are Bahamian mothers who pack their sons off to school in the U.S. with family pictures, a piece of johnny cake and lessons in how to kowtow to police if they stop you. There are dads who warn their daughters of dangers they would never expect to experience at home, that the colour of their skin may trigger a reaction, a response that the lunch table is full when there isn’t a table in The Bahamas where a black woman is not welcome. It is one of the truest privileges of living in this country and knowing that The Bahamas is ahead of much of the world in race relations.

So when you count down the days until borders open or we begin to live the new normal instead of wondering what it will look like, be grateful for a nation and a culture that largely - not perfectly, but largely - looks beyond race and where those who play the race card get the disrespect they deserve.

If you're a racist coward you should not serve. Unfortunately it looks as though many American cops are racist cowards....

Yes... way, way too many racist cops in the US. The police need to do a better job of identifying and purging the racist cops from their ranks. This small percentage of bad cops has completely hijacked their profession. The officer with his knee on the man's neck for 8 minutes already had 18 complaints on his police employment record. 18!!!!!!! And he still was allowed to be a police officer. How was he not fired after say... 3 complaints. 18 is absolutely ridiculous and obscene. The police need to get real and do a much better job of eliminating the threat from within. It would certainly be a good first step in the right direction.

The compassionate understand and want justice for all black or white or brown or whatever color you choose.

Antiga was awaiting an opportunity to loot and destroy.

2017 a white women was shot by a black policeman in the same town ! He never left his patrol car and shot her out the window ! She was unarmed and had reported a disturbance in the area.No riots and he got 12 years in jail .I guess it wasn't sensational enough for CNN to report! The TV is your worst enemy as the computer for starting trouble with no consequence .

The noticeable thing is police brutality also happens in black on black countries like ours, people being beaten with clubs at a junkanoo parade for no apparent reason other than police brutality and there are also other injustices that happens involving law enforcement and are swept under the rug, and like in all police beatings and killings like their counterparts in the USA the first thing they will say they acted because they were in fear for their lives. Police car cameras and body cameras along with civilians cameras are the deciding factors, when will our forces have theirs? At least these persons will unite, and have the balls and the will and are standing up and protesting for injustice. The big question is when will we?

Similiar in Bimini in 2003 - man shot/killed at Bimini Breeze bar by officer. Residents protested and burned the police boats and a couple of cars, duh, that didn't help justice to be served, just an additional cost of an already strained economy and wasting the time of public employees. The article is right though, a lot of Americans questioned the safety of the Island after that.