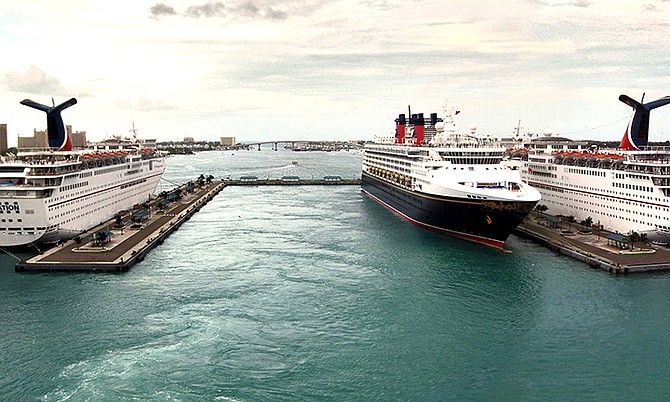 * 'Getting across goal line needs awful lot of work'

The cruise lines will resume calling on The Bahamas' major ports in the 2021 first quarter, Nassau Cruise Port's top executive predicted yesterday, while warning: "We won't see anything in 2020."

Michael Maura, speaking after US health regulators set the conditions the cruise industry must comply with to resume sailing, told Tribune Business that this had provided sufficient clarity on "a path forward" for the sector's return to The Bahamas and other Caribbean nations.

He was quick to point out, though, that much "collaboration" will be required between the cruise lines, Nassau Cruise Port and other major Bahamian gateways, and the Government in developing COVID-19 protocols to ensure the sector's return is "bullet proof" from a health and safety standpoint.

Suggesting that the cruise industry had been working vigorously behind the scenes to address the Centres for Disease Control and Prevention's (CDC) concerns, and had reached the equivalent of a football field's half-way line, Mr Maura said it was now vital that all stakeholders work together and avoid "operating in silos" to ensure the sector's resumption "gets across the goal line".

While hailing the CDC's unveiling of its 'Framework for resuming safe and responsible cruise ship passenger operations' as "great news" for The Bahamas, and all businesses and employees that relied upon the sector for their livelihoods, Mr Maura acknowledged that The Bahamas' major port hubs - Nassau and Freeport - will almost certainly not receive any calls before year-end.

This was effectively confirmed yesterday when Royal Caribbean joined its main rival, Carnival, in announcing that all previously planned sailings for December have now been cancelled through year-end - albeit with some unidentified exceptions - as the industry continues to assess the CDC's directive, and develop its plans for complying with the just announced 'framework'.

"We're not going to see anything in 2020," Mr Maura told Tribune Business. "I would say we will see their return, and I believe we will see a ship, in the first quarter of 2021. Our tourism partners now know what they have to do, what work lies ahead of them.

He added that, in accordance with the phased return and trials sought by the CDC, the cruise industry will likely resume with test voyages involving crews playing the part of passengers.

Voyages to "nowhere", meaning cruises on the open sea, as well as sailing to their private islands where passengers can be kept in a COVID-19 free "bubble", will also feature prominently in the steps the industry will take to resume business prior to restarting calls on major commercial ports such as Nassau and Freeport.

While the cruise industry's return may still seem far-off for many Bahamian merchants, tour and excursion providers, straw vendors, hair braiders and others, Mr Maura nevertheless argued that the CDC's announcement completed a major step in the process and the responsibility shifts to others to implement the necessary COVID-19 health and safety protocols.

"What it means for us is that we now have a path forward, which is great news," he explained. "If persons were wondering if they would ever take a cruise again, they should be wondering no longer. This is a very important part of our tourism sector in The Bahamas, so it's great news.

"One of the challenges we have had as a port community is that we have yet to, just like the cruise lines were waiting on the plan from the CDC for the way forward, receive the plans from the cruise lines...."

"The cruise lines have to make sure they're bulletproof as they resume sailing. They are going to come to the Government, come to the ports and come to the cities, and tell those stakeholders what is required to ensure they do business.

Noting that much work has already been done to pave the way for the cruise industry's return, with the lines investing in reconfigured ships, health protocols, testing and onboard medical and quarantine facilities, Mr Maura added: "It's not as if we're starting from zero.

What Maura and D'Aguilar have not told the public is that the CDC and US Department of State will not be allowing cruise ships with American passengers on board to call at ports in countries where there is a great risk of passengers who go ashore becoming infected with the deadly Communist China. And right now both the CDC and US Dept of State have travel advisory health alerts posted on their websites warning US citizens not to travel to The Bahamas, especially if they are elderly or have pre-existing medical conditions. The US Embassy in The Bahamas has of course posted on their website links to these serious health alert warnings.

Truth be told... I wouldn't do a cruise even if it was 100% free. The whole cruise industry needs to rethink their hygiene protocols. Even before COVID, there were way too many instances of NOROVIRUS outbreaks. Most cruise ships have only a few hours between arrival and departure. No way that's enough time to properly clean every cabin/surface.

they encourage it for the lively hood of the small man, hair braiders, straw vendors, taxidrivers and bay street merchants, not to mention the taxes fees for the private islands Bay street has been a gost town from the pandemic began. We have to balance health, economy and the environment.