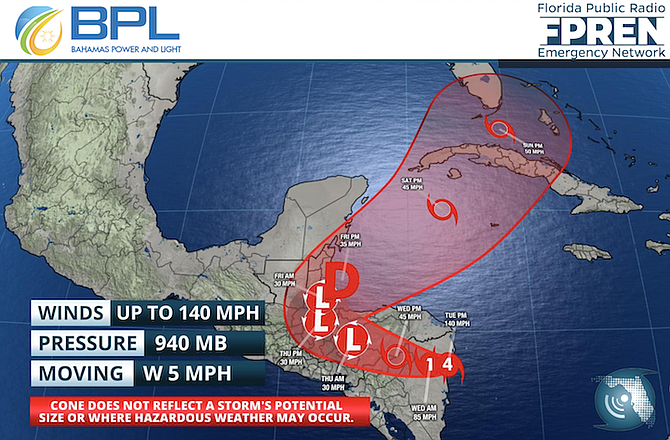 WEATHER officials say it’s too early to say whether Tropical Storm Eta, which was downgraded from a Category Four hurricane, could impact The Bahamas after it moves away from Central America and treks towards South Florida over the weekend.

However, officials say they are keeping a close eye on the system and will update the public accordingly as more concise information becomes available.

This comes after the US National Hurricane Centre on Tuesday included the northwestern Bahamas and South Florida in Tropical Storm Eta’s forecast cone.

Speaking to The Tribune on Wednesday, Chief Meteorological Officer at Bahamas Department of Meteorology Arnold King said officials are actively monitoring the situation.

“We are keeping a close eye on it but the Hurricane Centre is saying that it may become a tropical storm as it goes back into the Caribbean Sea and they expect that it will go across northern Cuba and possibly impact the northwest Bahamas,” he told this newspaper.

“If you look at the chart that the forecast track is giving, they expect that most likely it will go across northern Cuba and then impact Southern Florida but that still is an early forecast. We are keeping a very close eye on it but officials are expecting it to impact southern Florida as a tropical storm and not a hurricane at that time but that could change.”

The tropical storm, which made landfall on Nicaragua as a Category Four hurricane on Tuesday, continued its westward trek into Central America Wednesday morning, weakening as it moved through northern Nicaragua.

While more weakening is expected, forecasters predict that it will regain tropical storm strength when it re-enters the Caribbean Sea either tonight or Friday.

The restrengthening, weather experts added, is expected to occur before the storm heads towards Cuba and then nears southern Florida on the weekend.

Asked Wednesday about the likelihood of the system impacting The Bahamas, Mr King said while it is possible, it is still too early to tell.

“It’s possible and if you look at the cone of uncertainty, it does cross paths with the northwest Bahamas. It just barely crosses the western part of Grand Bahama,” he told this newspaper.

“But looking at it now, it appears that most likely that if it does reform into a tropical storm after it comes off the coast of Central America then it will move across western Cuba and most likely impact south Florida but we are keeping a close eye on it just in case if it would moves more to the east but at this time, it appears that South Florida will be mostly likely path for the storm.

The 2020 Atlantic Hurricane season, which kicked off in June, ends on November 30.

However, Mr King said it is important that the Bahamian public not let their guard down as it is not uncommon for the country to experience storms outside of the season.

In August, Hurricane Isaias passed over The Bahamas, packing winds up to 85 miles per hour. It was also the first storm the country experienced since Hurricane Dorian last year.

Unlike Dorian, Hurricane Isais, which left the country as a tropical storm, did not leave behind any major damage in its wake.

Bahamas, South Andros and New Providence, at least will most likely be feeling some effects on Sunday.

Really?! You think we might get some rain. LOL