24-hour weekend lockdowns to end for New Providence and Abaco 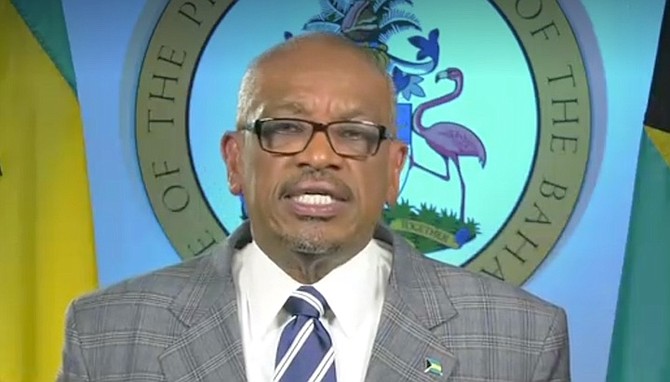 The new weekend curfew hours will be from 6pm to 5am.

In addition, new weekday curfew hours of 9pm to 5am will begin from Monday – these hours will also apply to Grand Bahama on weekdays and weekends.

Dr Minnis said the nation has seen a fall in the number of new COVID-19 cases, including a decrease in new cases by 50 percent between October 10 and November 5 and an eight percent decrease in the last seven days. There has also been a 68 percent decrease in hospitalisations from mid-October until now.

• On Saturdays, food stores may open to the public.

• On Sundays, food stores may carry out restocking.

• Outdoor dining may resume at restaurants and at fish frys, Monday to Saturday. On Sunday, only drive-thru and take away services will be permitted.

• Effective tomorrow, a 24-hour weekend curfew will be implemented on Eleuthera (excluding Spanish Wells and Harbour Island), starting 6pm on Fridays and ending 5am on Mondays. During the 24-hour weekend curfew, businesses will not be permitted to operate, including grocery stores, restaurants and pharmacies. During the week, from Monday to Friday, a daily curfew will be in effect from 6pm to 5am. Commercial activity will continue during non-curfew hours. All bars and restaurants connected to bars are to be closed. Residents should not operate bars from their residences. All private and public social gatherings are prohibited. Indoor church services are not permitted. In-person classroom instruction of students is also prohibited. Both may occur by virtual means only. Funerals are to be a maximum of 10 people at the graveside excluding the officiant and caretakers. Weddings are to be a maximum of 10 people excluding the officiant. Receptions and repasts are prohibited.

At last, some relief! Let's just hope everyone acts responsibly.

Once again the response to this virus must be fluid, flexible and farsighted. As the empirical evidence emerges on the metamorphosis of this virus an effective leader adjusts the strategy to handle It. As the needs of the nation begin to become manifest the FNM will once again implement strategies to accommodate them.

Thank you for your leadership. May God continue to bless and keep you.

Minnis' idea of leadership is starving the nation for a week without warning, closing down small businesses and food stores while locking down everyone else while he and his cronies continue to receive their belly full!

Like Dorian, Minnis and his administration's response to this pandemic has been a complete circus show, only a braindead Minnis fanboy would dare to think he deserves any sort of praise for his gross incompetence!

agreed. There's no rhyme or reason to any of this. more than likely this is the valve release to allow them to lock us in for the entire Christmas holidays

Your name should be Ispewfilth. Please do not let envy, jealousy and bitterness cloud your assessment of the proactive responses of the Government to this virus. What would you do? What would a PLP Government do? Take kickbacks on every COVID-19 Test? Push their supporters to head of the admissions line at the hospitals? Fly their leaders to Florida for treatment with funds from kickbacks? Yes, of course. It would be a vicious cycle of benefiting at the expense of the man and woman in the street.

I am just shocked that you PLP sycophants cannot put the National interest above your narrow self enriching greed. Face it , those days are over. Never again will the Bahamian people be saddled with such a despicable group of greedy politicians.

We are grateful for the leadership of Dr. Minnis.

Only a diehard Minnis fanboy like yourself would label those who don't support their almight ruler aka Minnis as "PLP voters", you can look through my comments along with others and see that majority of us detest both the PLP and the FNM, both parties and their incompetent "leaders" are why this country is in its current situation, with no hope whatsoever in the future!

Agreed, these lockdowns have been a bitter pill to swallow; however the Minnis administration has done a fair job trying managing this second wave. Ispeakfacts aka Ispewfilth at times, seems to be overly political with his views each and every day with his comments. In my view those are the political operatives who was hopeing for some type uprising in this country. But the Bahamian have remains disciplined during these curfews and the cases are going down

Thank God nobody will get the flu this winter.

Everyone keeps referring to this as ‘the second wave.’ But some graphs for world Covid-19 cases clearly show this is the third wave.’ So if this is the second wave, does it mean the country should prepare for a third wave and another set of restrictions and lockdowns?

It is my guess the waves will continue until we as a people take it seriously. The count was low before, then we went crazy and this is the result. So he ease the restrictions.. let's see what happens this time.