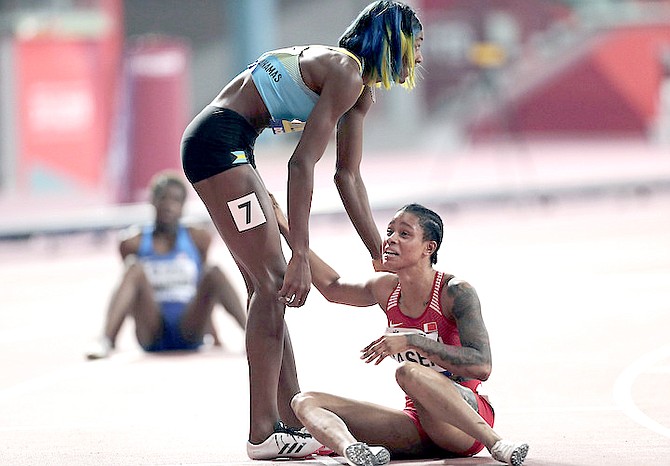 SALWA EID NASER, of Bahrain, right, reacts after winning the gold medal while being congratulated by silver medallist Shaunae Miller-Uibo, of the Bahamas, after the women’s 400 metre final at the World Athletics Championships in Doha, Qatar, on Thursday, October 3, 2019. (AP Photo/Nariman El-Mofty)

Following her emphatic triumph on October 5, 2019 at the World Championships in Doha, Qatar over Miller-Uibo, World Athletics provisionally suspended Naser on January 5, 2020 for failing to make herself available for three drug testings during a span of 12 months.

However, on October 20, World Athletics’ Athletics Integrity Unit (AIU) cleared Naser of any wrongdoing and dropped all charges against her, allowing her to hold onto her gold medal and be eligible to compete in the postponed 2020 Olympic Games, which will now be held in Tokyo, Japan in 2021.

Miller-Uibo, 26, questioned why the 22-year-old Naser wasn’t suspended - possibly for two years.World Athletics, the world governing body for the sport, has not yet released any statement in response to Miller-Uibo’s plea.

However, three weeks later, NACAC, the governing body for the sport in the region headed by Bahamian Mike Sands as president, issued a statement yesterday stating that having thoroughly examined the circumstances that led to the recent comments of Miller-Uibo on the recent ruling of the Athletes Integrity Unit (AIU) against Naser and that their Athletes Commission is throwing their support behind the Bahamian multiple national record holder.

“We are mindful that in the case of Salwa Eid Naser, the terms of the delays in the charges being brought sometimes happens because the Anti-Doping Organisations with results management responsibility need to be thorough in their investigations before alleging the commission of an anti-doping rule violation,” the NACAC statement read.

“Nevertheless our Athletes Commission nonetheless feels that many of the concerns raised by Mrs Uibo are valid and require the urgent attention of World Athletics if it is to sustain the confidence of athletes in the system and, ultimately, in the sport,” the statement read.”

The statement further stated that athletes are required and are held accountable for their actions and rightfully so, however, many are convinced that the process is inconsistent. The process is not at all uniform across the globe to such an extent that many are of the view that some athletes will always get the benefit of the doubt given the perceived inconsistencies.

“There has to be greater accountability on the part of athletes regarding whereabouts filings but we also believe that the process applied in dealing with whereabouts failures could be more explicitly outlined,” the release noted.

“Rather than having the option to provide explanatory notes, this should be a requirement. Inconsistency in the application of rules, regulations and laws is one of the most frustrating things for athletes.”

Nigerian-born Naser clocked a personal best time of 48.14 seconds, becoming the first Asian woman to win the 400m at the World Championships. Her time placed her third on the 400m all-time list behind only world record holder Marita Kock (47.60) and Jamila Kratochvilova (47.99).

In the process, Miller-Uibo had to settle for second place in a national and area record of 48.37 for sixth place on the all-time list.

In her statement last month, Miller-Uibo said her concern was not just with the athlete missing four tests and having the charges dismissed.

“It’s with the international federation and the integrity unit that was assembled to protect this sport,” she stated. “In my opinion, the World Athletics and the Athletics Integrity Unit (AIU) were caught with their hands in the cookie jar as it pertains to this case. I was interested to see how this turn of events would transpire.

“I think this strengthens the need for an independent body to serve alongside the World Athletics appointed athlete representatives. With the independent athletes’ body, more accountability will be given as we try our best to rebuild trust and integrity in our beloved sport...I cry foul play and I believe there is a deeper explanation on how the World Athletics along with the AIU allowed this to carry on to this extent.”

Ultimately, AIU determined the doping control officer (DCO) inadvertently knocked on the wrong door during Naser’s third whereabouts failure on April 12, thus nullifying their decision not to suspend her.

NACAC said of some concern is the matter of the options available to athletes who are aggrieved with the operations and/or decisions of the AIU.

“Regular dialogue is critical in this process. We insist that we are all accountable regardless of where we are located in the sport’s global structure.”

As president of NACAC, Sands sits around the executive table of World Athletics, having replaced Pauline Davis-Thompson, the immediate past councilwoman, who previously represented the region.

World Athletics is headed by Sebastian Coe, whom Miller-Uibo called upon to provide a response detailing each step of all the failures that unfolded since the case began.