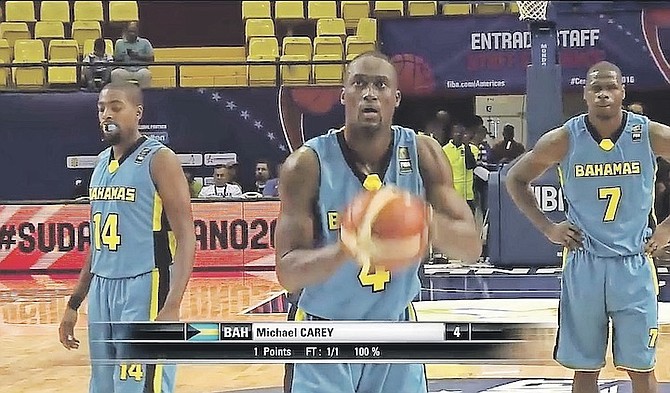 PRO basketball player Michael Carey Jr, centre, says he won’t be making the trip to Indiana with the men’s national basketball team in a couple of weeks for the FIBA AmeriCup 2022 Qualifiers. He said the Bahamas Basketball Federation didn’t have access to the proper facilities to train for the November 27 to December 1 showdown against the United States and Puerto Rico.

WHILE the men’s national basketball team is preparing to head to Indianapolis, Indiana, in a couple of weeks for the FIBA AmeriCup 2022 Qualifiers, professional player Michael Carey Jr has made it clear that he won’t be making the trip.

Carey Jr, who has been home since the coronavirus pandemic broke in March, said his decision was a personal one, but more importantly because the Bahamas Basketball Federation didn’t have access to the proper facilities to train for the November 27 to December 1 showdown against the United States and Puerto Rico.

“We have the opportunity to beat both the United States and Puerto Rico, but we’re in the golden age for basketball on the international stage, but we have to provide our elite athletes with the best opportunity to compete at that level,” Carey Jr said.

“That’s not just with basketball, but in swimming, track and field, boxing, tennis and baseball where we continue to produce some of the best athletes in the world, but we’re still not allowing them to utilise the best facilities.”

Carey Jr said with so many of the collegiate and pro players being featured on the international networks like ESPN and Sports Illustrated for their achievements, it’s amazing that they can’t come home and train in the top facilities that have been made available for them.

“In Florida, sports is essential. Athletes can train in Florida, despite the pandemic,” he said. “But we’re talking about helping the community and when our athletes come home, they want to stay home. So why can’t they do the same thing that they are doing in Florida with sports.”

Not having the opportunity to get into the Kendal Isaacs Gymnasium to train with the other local players to prepare for the tournament, Carey Jr said he has decided to opt not to travel with the team.

However, he said he will make himself available for the second leg of the tournament that the BBF will host here in February.

“I love Mario (Bowleg, the president of the federation), but I just can’t do it,” said Carey Jr, who started playing on the national team at the junior level at the age of 14.

Having played on the senior team for the past five years since graduating from college in 2015, Carey Jr said this will be the first tournament he will actually sit out and that’s only because he doesn’t feel as if he’s in the kind of condition to compete right now.

Since he returned home, Carey Jr said he and some of the elite basketball players got permission to work out in the AF Adderley Gymnasium, but he noted that the floor wasn’t conducive, but it was the best facility available.

“It worked for us to get in some workout, but we’re talking about playing at a much higher level and we really need to be competing in the best facility available to get us ready to compete and I don’t think AF Adderley will fit the bill.

“We say we’re the richest nation in our region, but I’m watching some of my counterparts from other countries in the region, who are training in their top facilities without any problems.

“I saw an Olympian athlete on subvention working out on his community park all because he can’t get into the Thomas A Robinson Stadium.”

Carey Jr, 27, said he has the utmost respect for Lanisha Rolle, the Minister of Youth, Sports and Culture and Timothy Munnings, the Director of Sports, but he pointed out that there needs to be some changes made as it pertains to the use of the national facilities and he would be happy to provide some suggestions.

Carey Jr, a 6-foot, 5-inch shooting guard/small forward, last played with the Pully Lausanne Foxes in the Swiss Basketball League (SBL). He previously played in Mexico, the Dominican Republic and France after he completed his collegiate tenure with the San Jacinto Ravens and Wagner Seahawks in the United States.

While he’s home, Carey Jr said he’s working out with Shaquille ‘Shaq’ Cleare with his fitness programme as he waits on a call relating to his next professional move. His agent is working on trying to get him a deal to play in the NBA’s G-League, but he won’t know how that will work out until after the NBA season gets started on December 22.