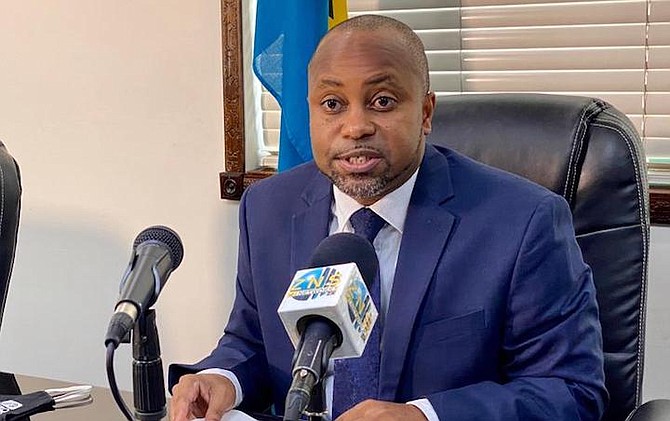 Minister of State for Grand Bahama Kwasi Thompson has indicated that major rebuilding of “a new Rand Memorial Hospital” is nearly completed and should “see some normalcy” by late November.

“While this will not be a new hospital it most certainly will be a new Rand Memorial Hospital,” he said yesterday as the island recorded increased cases of COVID infections.

In his report to the nation on Thursday, the minister gave a detailed update on the hospital and the progress of the construction underway there.

He reported that the COVID-19 Isolation Unit at the Rand’s Medical Surgical Ward 3 is completed and will be occupied this week.

“Each room can occupy up to two patients, is fully furnished with beds, tables and equipped with oxygen outlets in the event a patient is in need. This will have a total of seven more beds for COVID-19 patients,” he said.

The minister said the fight is still on and that Grand Bahama must do its part to stop the spread of the coronavirus.

“We must not let our guards down,” he said, urging residents to continue to wear their masks, sanitise, and practice social distancing, and to not gather in large crowds.

“I thank you for the hard work and continued dedication,” he said. “I must also commend the efforts of residents of Grand Bahama for your discipline and responsibility, but it is also important to acknowledge that we are still fighting the pandemic and must all collectively do our part to keep the numbers down.”

The Rand was among several government structures that suffered damage following the passage of Dorian last September. It had sustained damage to about 80 percent of the building due to blackwater intrusion – water mixed with sewage - and subsequent mold overgrowth.

“One of the most crucial structures that required a major rebuilding effort was the Rand Memorial Hospital,” said Mr Thompson. “Construction workers have been working tirelessly to complete rebuilding of the hospital.”

The Prime Minister had announced that $21 million has been allocated for the Rand Memorial Hospital.

According to Mr Minister Thompson, the kitchen cafeteria building has been substantially completed with furniture and is being utilised while the cafeteria is 90 percent completed.

He said that much development has been done in the main hospital section building. The main corridors, pharmacy, foyer, and pediatrics area will be ready for occupancy within the next two weeks.

The main hospital’s entrance will include a new portico which is now ready for paving, and arriving patients will have access to be dropped off directly at the front door from the protection of inclement weather.

Some of the highlights of the newly rebuilt hospital he mentioned include a new isolation centre, pharmacy, pediatric ward, ICU, surgical ward and a new medical ward.

Minister Thompson said there are approximately 150 Bahamian workers involved in the reconstruction of the RMH.

It’s not for the lack of effort with this government, but for being a victim of circumstance.

Why is no one saying what has been done to prevent another flooding? To simply rebuild is crazy.