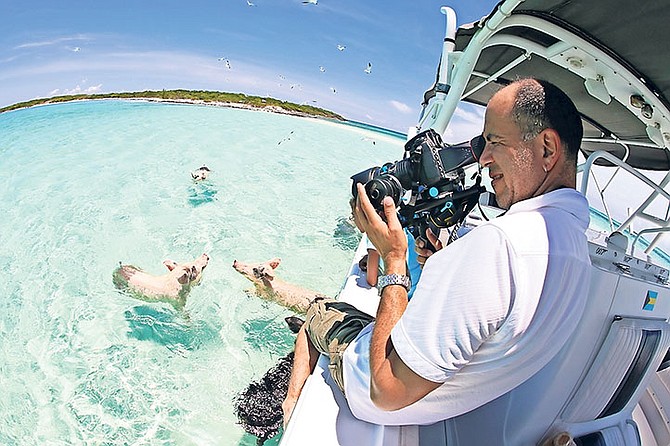 THE SWIMMING pigs in Exuma have found fame around the world - but tour operators are concerned that they now need help from the government to keep them fed.

STRUGGLING tour operators on Exuma are disappointed that the government is not helping to feed the island’s main tourist attraction: the swimming pigs.

Exuma Water Sports owner Raymond Lightbourn expected to turn his business over to his children this year until the COVID-19 crisis depleted his savings and made retirement a distant dream.

Despite losing an estimated $2m in revenue, the 66-year-old said he spends about $70 a day feeding 12 pigs on White Bay Cay that were once featured on ABC’s The Bachelor––a significant expense in a year with so few tourists.

“I tried to get the Ministry of Tourism to help, but they declined to do so,” said Mr Lightbourn. “I asked them for $12,000 because that would help us until February but they said they don’t have it. They said I should ask the homeowners for help, but they don’t realise that people don’t have the money.”

Sandals Emerald Bay helped feed the pigs before its closure earlier this year. With the resort expected to reopen in February, Mr Lightbourn said he does not know how much longer he can feed the animals.

Bernadette Chamberlin, president of the Original Swimming Pigs Limited, a company that looks after some 60 pigs on Big Major Cay, said she twice asked tourism officials for help but got rebuffed.

“I have to beg people for a donation,” she said yesterday. “We are living on donations from people around here. A couple of tour operators used to give donations but they haven’t done it in a while because of the pandemic. Tourism told us they could assist with medical help for the pigs but basically that’s about it.”

Ms Chamberlin said with its silver palms, berries and wild dillies, Big Major Cay is fertile enough to sustain the pigs for a short time without human intervention.

But “the cay won’t be able to sustain them for long,” she said. “When the pandemic first started and there was a total lockdown and we couldn’t go out to feed them, we noticed the pigs started to lose weight.”

For Mr Lightbourn and Ms Chamberlin, food assistance from the government is a no-brainer.

“The pigs are the number one thing,” Ms Chamberlin said. “Every time people come, they want to see the pigs. Tourism knows this because our pigs are always on billboards around the world. Not helping is disappointing because they represent The Bahamas and that’s why we assumed our government would help.”

Janet Johnson, CEO and executive director of the Tourism Development Corporation, said officials want to better regulate the sector. She said operators who rely on the pigs should sustain their maintenance.

“We’re working very hard to bring some regulations, to provide medical care for those pigs,” she said. “It’s a challenge because these tours pop up and they don’t think about all the things that need to go with them and now we’re having to try and catch up to what’s happened. The pigs have been great ambassadors to the Bahamas, lots of people come just to see them, but we have tours at Spanish Wells, in Long Island as well.”

“These are private enterprises,” she added. “All of those people that are benefiting from that private enterprise ought to be contributing to it and to preserving that asset that they are benefiting from. Bahamians tend to want to consider it a free ride. Someone has to feed them, somebody has to carry water for them, someone has to take care of their medical bills, it just doesn’t happen like a miracle and this is what we’re trying to get them to appreciate.”

The solution is obvious: Bacon!

Feed your golden goose pigs or they will die.

The only real surprise here is that it took so long for someone to finally come forward and mention the need for the pigs to be cared for during the pandemic.

I hope they find a solution quickly as domesticated pigs will automatically turn into wild pigs in a very short time.

Those who have been the greatest beneficiaries should be the ones to band together and figure out a way to protect their livelihood until tourism recovers. How can they expect to have all the benefit, but no sacrifice?