Kendalia’S Encounter With Racism In Usa 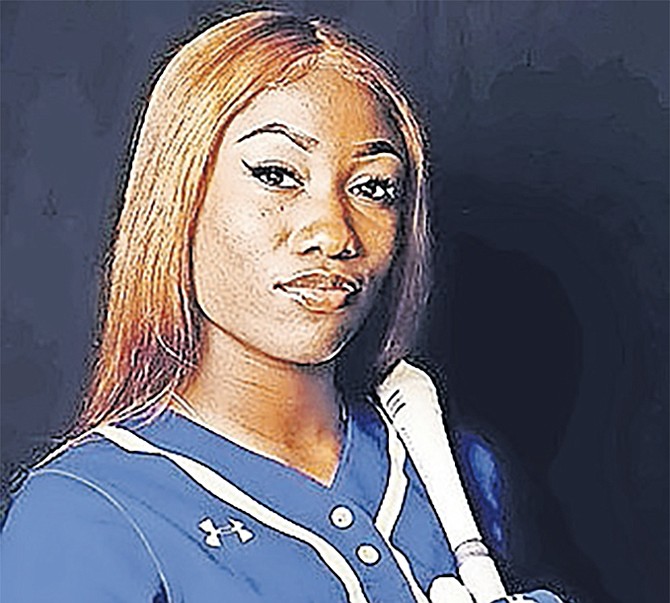 As an athlete coming from the Bahamas, Kendalia Turner didn’t know the true effect of racism until she encountered it when she went to Georgian Court University in Lakewood, New Jersey, on a softball scholarship.

But when she was asked by the National Collegiate Athletic Association (NCAA) to participate in a programme for athletes of colour called “Untold Athletes,” who tell their “Our Untold Stories” in the coronavirus pandemic, she didn’t hesitate.

Her story was made public on Sunday, but Turner, who is now back home after graduating in a virtual ceremony in May, said she was surprised that she was asked because racism is not something that she experienced here as it is prevalent in the United States.

“I didn’t expect anyone to ask me about it, so I was surprised when I was asked to speak about it. The first time when they called, I tried to hold back on some of the things I experienced when I was in school,” she said.

Although she walked into a racist situation in a predominantly White school, by the time she got into her sophomore year, Turner said she was well liked by her team-mates and the student population coming from the Bahamas.

“In my freshman year, people were saying things around me, so that was why I was a little hesitant to say anything about it,” she said. “But I felt that I was given a platform to speak and if I did, more people would come out and share their experiences.”

The 21-year-old Turner, who graduated with her major degree in business administration and a minor in accounting, is home now working with Aliv as she undergoes online classes for her MBA programme at the University of Windsor in Ontario, Canada.

“To be honest, I never thought about being a collegiate softball athlete. I was young when I started playing softball, so it just wasn’t a part of my mentality. We wanted to go to high school and play, or we wanted to just go to tournaments in the summer, but the mentality of most girls playing softball in the Bahamas wasn’t, ‘Let’s go to college.’

“The journey to high school was fun. It wasn’t easy to get recruited, but I also wasn’t pressured into it. I ended up getting a scholarship to play softball in high school at the Lyndon Institute in Vermont. I started the college recruiting process in October of my senior year. Luckily, I was able to get recruited to go to Georgia Court.

“The game in college was very different from the game in high school. You go from being an all-star or being one of the best on the team – to having to compete to play. When I came to college, I realised that everyone is an all-star, everyone’s good. It’s a lot of competition, the game is much faster. I had to adjust quickly.

“I wasn’t prepared or taught how to deal with racism, especially coming from a predominantly Black nation. It was scary going to Vermont because I’d never faced racism before, and now I was facing it without my parents. I didn’t have family and friends to go to.

“Going away to school, I was prepared for peer pressure, doing my laundry, and making dinner, but I wasn’t prepared for racism. I’ve had incidents where I couldn’t cross the street because cars would intentionally drive slowly just to raise their middle finger at me.

“I had a cheeseburger thrown at the back of my head for sitting in a chair that was known to be someone else’s at the café. Remarks were made. I would be stared at in the grocery stores. It was hard and I knew I had to do everything in my power to make my dreams come true because it certainly would not be handed to me on a platter.

“I went on to college and it didn’t stop. I wanted to give up so many times. All of this happened, merely because of the colour of my skin and not the person I was. I still get emotional about it. I understand that I should speak on it more so that others can speak up as well. I was fortunate and blessed enough to come into contact with a small group of persons that had my best interest at heart, that saw more than my colour, and helped me overcome something that I never dreamed of facing. I also grew to speak up for myself and made my experience alright as I finished my collegiate career.

“I know what Black athletes face and I can guarantee that there are terrible experiences out there but the fact that we succeed at what we do, racism does not prevail. Our work ethic, drive, and persistence is unmatched! I thank God for those experiences, it made me who I am today, but no athlete, no person should go through that, especially simply because of the colour of their skin.

“You endure so much failure in softball. You can never be perfect. If you fail six times out of 10, you’re probably in the Hall of Fame. It’s always a constant battle with defeat, and you have to be able to be strong to say, “Well, I gotta move on,” or “I know what I need to fix.” You can’t dwell. I owe the game because I learned a lot, and that was the biggest thing for me. And it also allowed me to touch a lot of people, influence a lot of people, mentor a lot of people.

“I really do play for the younger kids, people that are coming up with dreams and they don’t know they can do it, just like in the beginning I didn’t even know it was possible. I would say to my younger self: ‘Stay the course and don’t give up because you can make it happen. It won’t be easy, but it can be done.’ They say if life gives you lemons, you make lemonade, so you’re gonna go through some things, which can be scary. I think you just always have to look at the bright side and never become negative.

“My hope is to get to the point where we genuinely understand the value of every athlete. We may say we do, but I want it to be genuine and pure.

“White, Hispanic, male, female, tall, short, I think we need to really understand that athletes are important. No matter how they look, no matter their size, or their gender. We have a lot of work to do. I do think

“I just hope we can move in unity, and create peace and love. As for athletes, it’s our responsibility to be the change we want to see, and I do think that education is key. Sometimes I’d see things happen and not really say anything about it. And so I realised that I can depend on myself. No one else is going to make the correction. I have to stand up and speak, because I want things to change.”

With all of the protests that took place that led to the “Black Lives Matter” movement, Turner said she was glad to get out of the United States because she didn’t experience any type of racism here in the Bahamas and she didn’t want to be part of it.

“I followed a lot of it on social media, so I learned a lot about what was going on,” she said. “A lot of my team-mates were reaching out asking what they can do to help. But I was glad that I got this opportunity to speak out.”

Turner, the daughter of Kendal Sr and Vashti Turner and sibling to Mia and Kendal Jr , was a NFCA All-American Scholar-Athlete, Arthur Ashe Sports-Scholar, and an NCAA Division II Softball Scholar-Athlete.

The 5-foot, 4-inch shortstop and captain for the Lions’ ladies softball team, was the winner of the 2020 Softball Coach’s award. She received the Division II AD Association Academic Achievement Award and was a three-time selection to the CACC All-Academic Team.

Additionally, she coached a 14-and-under and 16U team with the ruthless softball organisation which is headed by USA softball Olympian Crystl Bustos. She was also manager of the on-campus gym.

Lived in the US for 10 years. The racism was everywhere, I was shocked. I'm white so they let their guard down around me. It is everywhere...

didn't have to go to Georgia to experience racism, a lot of white bahamians experience racism everyday and even today.it is amazing that we only have racism against blacks from white's only. Forget about black on black racism or any other form. just Amazing, open your eyes and see.

She got a reality check that's what, not sure why anybody is surprised here. And while we on the topic of racism, Bahamians all the time racially discriminate against Haitians like it's normal.

When you have a strong sense of who you are you will never call others racist, you will simply acknowledge their ignorance and extremely limited world view and move on. Generally speaking, I am tired of people like Booker T Washington making something out of themselves having seen slavery first hand, while comparatively privileged blacks bellyache because others may treat them differently and use it as a crutch to justify their victim mentality. Ignore the ignorance of others and forge your own path!

And people need to remember, blacks are very 'sensitive' against other races or lighter hues of 'blacks' and can discriminate with the best of them!.

Go talk to some Haitians if you want to learn about being a victim of racism.