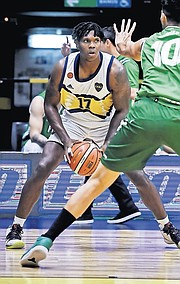 TAVARIO Miller was an early season acquisition for Boca Juniors in Argentina’s Liga Nacional de Básquet and has had an immediate impact with his new club.

Miller has averaged 15.3 points and eight rebounds through three games thus far. He debuted with 14 points and 10 rebounds in a 76-60 win over Ferro just one day after signing with Boca Juniors.

He followed with 16 points in a 98-66 loss to Gimnasia, the top ranked team in the league and most recently posted 16 points and 11 rebounds in an 82-63 loss to San Lorenzo.

This season marks Miller’s second in Argentina. Last season, he played with Quimsa Santiago del Estero and in 21 games he averaged 10.9 points and 5.5 rebounds per game. He played an integral role in Quimsa winning the league’s pennant and finishing as the runners-up in the final.

Miller played last season in the Spanish LEB-Silver league with Grupo Eleyco Baskonia and in 33 games with the club, he averaged 11.5 points, 8.4 rebounds, and 1.2 steals per game.

He also played professionally in Mexico and Norway (Fyllingen BBK). Miller’s team made it to the Norwegian BLNO Semifinals in 2018. He was also voted Eurobasket. com All-Norwegian BLNO 2nd Team in 2018. At the national team level, he has regularly played for the senior men’s national team since 2015 and previously for U17 National Team back in 2011. Miller represented the Bahamas at the Central American and Caribbean Games in Barranquilla (Colombia) last year and through five games averaged 6.6 points, 6.2 rebounds per contest.

Miller concluded his collegiate career with the Texas A and M Aggies. As a senior he saw action in all 31 games, drawing two starts while averaging 10.4 minutes per contest and averaging 3.1 points and 2.7 rebounds per game.