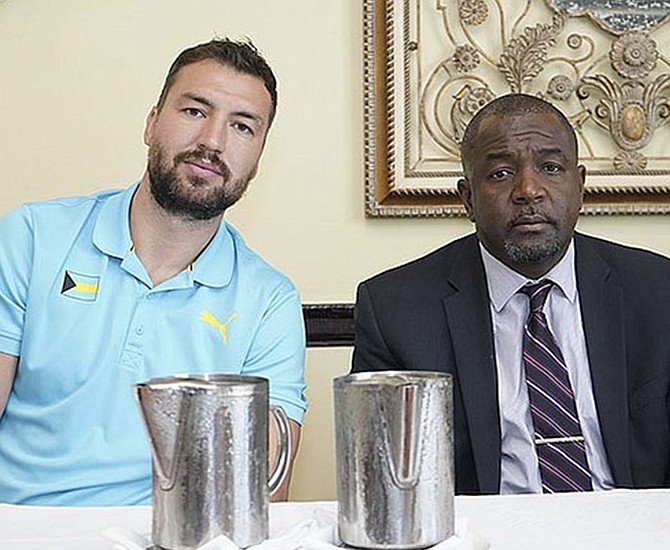 Despite the challenges the programme has faced to this point, Chris Demarco remains optimistic on his official debut as head coach of the senior men’s national team at the FIBA level.

A shorthanded Team Bahamas still faces uncertainty on its roster situation just days away from competition, against the United States (November 29) and Puerto Rico (November 30) at the FIBA Americup 2022 Qualifiers in Indianapolis, Indiana.

“We like our team. Everybody who is here, the federation, myself, and the coaching staff, we got together and talked about our group of guys that are going to be competitive and play hard. There’s a lot to like about the guys that are here. Stuff can change from day to day, we still don’t know how it’s going to look Sunday and Monday but so far I think the roster reflects what we were trying to do as a federation,” Demarco said. “I think our strength is going to be able to move the ball and shoot the ball. I think we have a roster that has some good shooters but I think it always starts defensively. We tried to put together a team that can defend and compete on that end of the floor, force some turnovers and get out and push the basketball. Again I don’t know exactly what it will look like, but how the roster is built right now, the defensive end will get it done for us and create opportunities for us offensively.”

Several prospective players have been unavailable for a myriad of reasons ranging from COVID-19 travel restrictions in their respective countries, unable to clear COVID-19 protocol, or not acquiring a release from their club team.

“It’s been difficult, FIBA and USA as the host team has been great so far but it’s been proving difficult for us and I know for some of the other countries to get players in from overseas. I don’t know how Puerto Rico and Mexico are doing but I know with the USA, the majority of their team is going to be from the states. That’s been the hardest thing, being able to get our guys over here. There needs to be 2-3 tests before you get here and there needs to be 2-3 tests here before you can play in the game. We are doing our best and I know our federation is doing their very best to make sure we put together a team that can compete.”

Gathering the country’s top talent simultaneously during a given window for qualification events has proved to be the biggest obstacle for the federation thus far.

“It’s always a challenge. It’s been about three years I’ve been working with the programme and we have yet to have that moment where we have all of our guys together but that’s always the challenge in FIBA. I do think we are headed in the right direction,” he said.

“This window especially, guys aren’t that familiar with each other, but that’s been one of the things we have been trying to do since we got here - getting guys to hang out and get to know each other and I think that translates to the basketball court. That’s a challenge with the protocols and tight windows for when guys can be around each other so we have to maximise our practice time. I think the future of Bahamas Basketball is bright, we have the right people in place, the players are committed and I’m excited for it.”

DeMarco, a former Dominican University (California) forward, has been a member of the Golden State Warriors’ coaching staff for seven seasons, serving as an assistant coach, member of the player development personnel, and video scout.

He served as an assistant for Team Bahamas in a win over the Dominican Republic in 2018 and most recently coached the national select team last summer against several elite NCAA Division I programmes.

“This window is no different than when I was there for the Dominican Republic or in the summer when we played Texas Tech, Georgetown, and Memphis.

“We’re all in this together. Coaches have daily discussions and we know exactly how we want to attack so it’s not one of those things where you’re out there on an island and it’s just you so I think it is going to feel very similar with everything, personally I’ve been through with the Bahamas and anytime I’ve participated in these events.”

Thompson, Taylor, and Cornish are the only holdovers from the previous window of AmeriCup qualifiers when The Bahamas scored a 76-59 win over Mexico last February at the Atlantis resort. “That was a different situation where we got to play the same team twice within four days, so you were able to watch film and make adjustments,” Demarco said. “[Those guys that were there] how they can be helpful for their teammates is just talking about the style of basketball that we want to play and be leaders out there on the floor and let them know what we are looking for.

Games will be streamed on ESPN+, but due to COVID-19 protocols, no fans or outsiders will be allowed inside the bubble for the games.