Insight: Poetic Justice, Maybe? Either Way, Trump Contracting Covid-19 Does Not Bode Well For The Bahamas 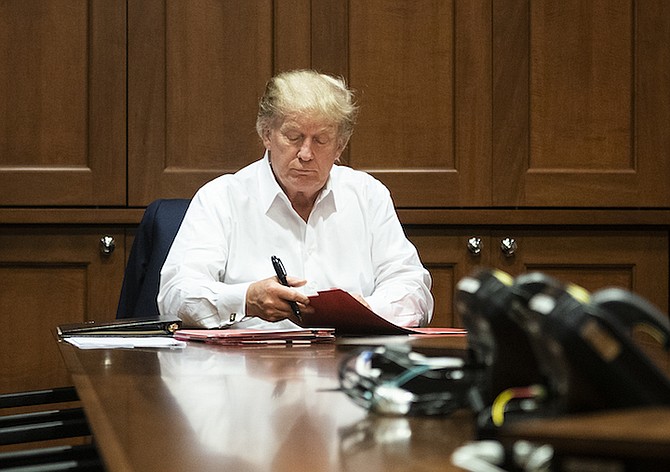 IN the same week when US President Donald Trump may have upped it a notch in becoming the most vilified man in the world, equally as shocking as his behaviour during the first presidential debate was the news that came early Friday morning. The American President tested positive for COVID-19.

Trump’s response to COVID-19 was one of the topics of the debate – but rather than hearing an apology for the multitude of missteps and dismissiveness of the virus’ severity, the strategy was a full barrage of verbal attacks in an attempt to dominate the spotlight.

Though many have found fault with President Trump’s handling of the coronavirus, no one was prepared for the eventuality that he, himself, would contract it amid an election campaign.

We can probably fill an encyclopedia with wild quotes from Trump on the coronavirus. There’s been everything from injecting COVID-19 patients with disinfectant to the prediction that COVID-19 would just disappear - “like a miracle”. The 74-year old President may need a miracle of his own to survive a sickness that has already claimed the lives of more than a million people – over 200,000 of them being Americans.

Even with one of his closest friends succumbing to COVID-19, the President has downplayed the virus at every turn. Holding campaign events where attendees not only refuse to wear masks but, in defiance of health guidance the world over, seek to intimidate others for doing so. Even in debate, Trumped mocked his challenger, former Vice President Joe Biden, for regularly wearing masks.

Trump has endorsed such cavalier treatment of the virus to the extent it has become White House culture. Some prominent members of American media are referring to the West Wing, of all places, as a COVID hot zone.

You just can’t make this stuff up. And as the Trump era may be culminating with an end suited for a Hollywood movie, the uncertainty that looms in America should also create unsettling feelings for The Bahamas as well.

As we have been gearing up for the second reopening of the country’s tourism industry, the leader of the most powerful country in the world, and our main source market, contracting the coronavirus was the last thing we needed.

Although no prognosis has been given on how this will affect travel, consumer confidence in the US has been unsurprisingly shaken in the past few days. According to a poll published on Friday by Morning Consult, nearly half of all US registered voters felt more worried about the economy after learning the news of the President’s diagnosis.

It’s no secret that when threats loom over an economy, consumers become stingier with their money as they tend to save more for a rainy day. A rainy day, in this instance, has been a torrential downpour, as the coronavirus, with no cure currently available, continues to be a threat that can lead to an economic downturn of epic proportions.

To make matters worse, those who had a false sense of confidence from Trump’s outlandish talk about coronavirus have had this notion crash and burn since news broke of his illness.

Unless, somehow, the experimental cocktail being administered to the US President is able to provide him with a lifeline, his political career isn’t the only thing at stake. We may once again be stuck with thousands of unoccupied hotel rooms as would-be travellers begin to take a longer look at the coronavirus for the sake of their health and finances.

Our only hope is that both Trump and Biden would have done enough for the latter to emerge as the victor in the election. So much damage has been done to the US – a country that has become the poster child for division among its citizens – and it has a lot of work to do to repair itself. The US needs a leader that is going to do what needs to be done to get the virus under control and restore unity and confidence among its citizens.

It’s not so much that Biden is a superstar candidate. Rather, Trump’s presidency has become such a stain on American politics that a reboot may be the cleanest alternative in moving forward. And if The Bahamas is lucky, a sense of a renewed command at the helm may be just enough to get our tourism industry off the sidelines in the near future.

As we powerlessly await whatever fate lies ahead for us, our leaders ought to be spending every waking moment figuring out how to empower our people and spur new industries.

History should never find us in this position again.