Pintard: We Will Take Action To Deal With Shanty Towns 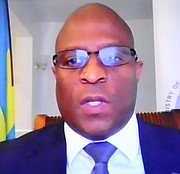 AGRICULTURE and Marine Resources Minister Michael Pintard yesterday vowed to crack down on all unregulated structures on government land in North Andros, insisting officials are “ready” to take action against residents who are still living in illegal structures despite receiving eviction notices.

Reiterating the government’s stance on unregulated development in the country, Mr Pintard revealed his ministry’s plans to restore government Crown land on Andros for the purpose intended, which is farming.

He said while the numbers of people still living in those unregulated communities have since “dwindled,” officials are “pressing ahead” in its goal to have the issue dealt with in a careful, but lawful manner.

“The committee continues to work within the guidelines set by the Office of the Attorney General while the numbers of illegal immigrants in the unregulated development have dwindled, we are still pressing ahead to eliminate unregulated development that have persons of different nationalities inclusive of Bahamians and we intend to restore agriculture land for the purpose it was intended and that is farming by registered and approved farmers,” he told reporters at his ministry’s press conference yesterday.

“The minister of financial services, trade, industry and immigration is continuing his work. He’s continuing the work that has been started prior to holding that position and has done a sterling job in ensuring that those who should not be on government land are addressed.”

In February, the government issued eviction notices to Andros residents living in illegal structures, a move estimated to possibly displace some 1,800 people.

However, Mr Pintard said yesterday the eviction notices expired in March, adding the government will have to take action against those who have not adhered to the orders.

“On the fifth of March 2020, the notices for occupants to vacate the land had expired so the ministry is now ready to take legal action against those who have not vacated the property,” he said. “All illegally constructed buildings will be dealt with. The Department of Environmental Health Services will assist in cleaning the property and the garbage that has accumulated and derelict vehicles.”

Last month, Works Minister Desmond Bannister told reporters that he, along with members on his team, had planned to visit Andros and assess for themselves what’s actually happening on the ground.

He added that once assessments have been made on the island, officials will subsequently formulate a plan to deal with the issue.