‘Why Need Guns At Atlantis Protest?’ 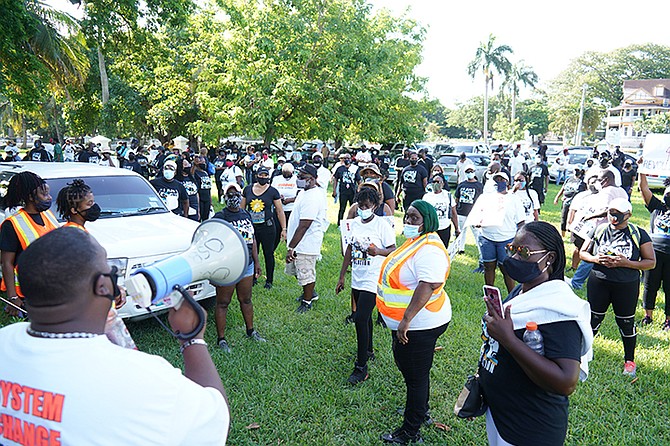 OPPOSITION Senator Fred Mitchell yesterday questioned why police blocked protestors from walking over the Sidney Poitier Bridge on Wednesday and decried officers being armed with “assault weapons” at a “peaceful” demonstration.

He spoke a day after scores of Atlantis workers protested for severance pay from the resort. The employees have not worked since March after the resort closed due to the COVID-19 pandemic.

“Yesterday, I observed as opposition spokesman for labour, the demonstration by Atlantis employees for the monies owed under the redundancy laws,” Mr Mitchell said at a press conference.

“This was not a PLP demonstration, but as the shadow minister I was tasked by the leader of the party to ensure that the rights of the demonstrators were protected and they were free to exercise the right of peaceful protest.

“I expressed my concerns by phone to the Attorney General about the fact that the bridge was closed to access by the protestors, even though any pedestrian is normally free to cross the bridge.

“Secondly, while I have no quarrel with police presence, I am again concerned about officers showing up with assault weapons in the face of a peaceful demonstration and no viable evidence of non-lethal methods of crowd control.

“It is ironic that the FNM authorities have now got themselves into a bind of hypocrisy again since they in their history led at least two demonstrations on the Paradise Island bridge, one of which was actively encouraged and supported by the now Prime Minister when he was leader of the opposition. Now it appears they have forgotten all that.

“Had the FNM authorities allowed the peaceful march across the bridge, they would not have had videos on Bay Street chanting ‘Minnis got to go!’”

Mr Mitchell noted that one person, who he said started the chant, was arrested.

“This raises the issue of the tensions in this society because of the management of this pandemic by Dr Hubert Minnis.

“Unfortunately, the normal institutions to deal with this thing like the House, the Senate and the courts no longer seem to be available to ordinary men and women as a means of redress and peaceful dissent is being suppressed.

“Over my objections today, the Senate again adjourned sine die without conducting any business for which it was convened and without a fixed date to resume.

“I have in my hand the copy of an action filed in the courts on August 14 and although it is ex parte, no judge has been assigned to hear it. The question then is, when the vendors at Arawak Cay say they need redress from the courts because of unconstitutional discrimination and they cannot get a date in court, what are they to do?

“The Atlantis workers are in the streets because they are left with no choice.”

The government has suspended the Employment Act provisions that mandate employers must pay full severance/redundancy to workers who have been furloughed, or sent home, after 90 days/13 weeks or otherwise recall them to work.

This provision is suspended until 30 days after the government’s COVID-19 emergency powers orders —currently in effect until the end of October— cease.

did fweddy just crawl out from under a rock?

And don't put it past Minnis to give a shoot to kill order in similar peaceful protest situations down the road......he's now so far off his rocker there's a stong possiblity he could order anything!

Seems so. Has he never seen demonstrations from around the world. When people are hungry, desperate and angry anything can happen. Police need to be prepared for all eventualities.

Freddy certainly doesn't mind looking like a fool in order to prop up the PLP.

"When a government no longer meets the needs of its citizens it is not only their right, but their responsibility to remove that government by whatever means are required." John Locke

I don't think we understand our own... they will turn on any government.. doesn't matter who it is...

Who's the "we" that you're referring to? Let's try get one thing straight....not one of us Bahamians is "your own" or "our government's own". You really sound like a condescending elitist political sob of the FNM persuasion.

Ask Perry and Barve what happen 4 years ago...

"“Unfortunately, the normal institutions to deal with this thing like the House, the Senate and the courts no longer seem to be available to ordinary men and women as a means of redress and peaceful dissent is being suppressed."

That is super super funny. When were the Courts ever available to "ordinary men" Senator? You are well aware that ordinary citizens are NOT ALLOWED to speak in the Supreme Court unless specifically questioned by the Judge. Citizens may not carry an action through the Supreme Court without an attorney. You can file an action, but not represent yourself. This has been the case long time, from even before Perry time.

What kind of government bars its citizens from access to the highest court (well, almost highest) in the land? I'm asking, not saying.

....and you talkin about access to the House and Senate when the Speaker of the House don't even have bathroom? Man try clean ya windshield before you drive on the road, so you can see where you going please.

I understand the defense force was out with sub-machine guns to keep crowd control today in Abaco at a gas station that was distributing free gas for generators provided by a local preacher man! If factual, was THAT necessary?

Uniform branches assigned to maintain law and order should be equipped for any eventuality at all times unless they have prophets among them. Would we prefer that things get out of hand first then respond? If you wait to see a need, you've waited too long.