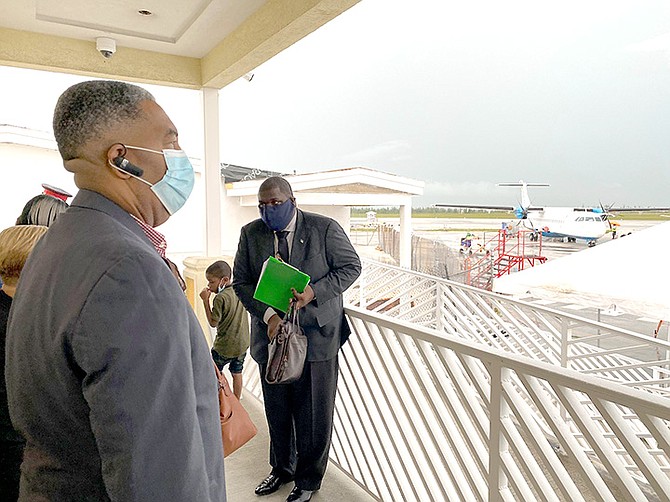 THIRTY of the 43 children from Grand Bahama Children’s Home who were relocated to New Providence a year ago after Hurricane Dorian, returned to Freeport on Friday morning.

Due to inclement weather, the yellow ribbon procession was cancelled and the children were taken directly to the newly renovated Children’s Home in The Village at Tripp Lane.

There was a ribbon-cutting to officially open the Home, which was fully renovated at a cost of some $850,000 by the Grand Bahama Port Authority.

The Children’s Home had sustained significant flood damage due to the storm surge last September during Hurricane Dorian. At the time, 43 children who were residents at the facility had to be evacuated late at night in the middle of the storm. They were flown to Nassau and placed at various state-owned shelter facilities for children.

Minister Campbell said that his Ministry ensured the children were well taken care of while residing at three facilities in New Providence.

“We were forced to take 43 children from GB to NP for continued shelter… temporarily at Ranfurly Children’s Home, which took in 21, and Children Emergency Hostel took in 15, and the remainder at a third facility. We ensure they took excellent care of our children,” he said.

“I am pleased to report that…they were brought back without a scratch. And when we planned to bring them back about two and a half weeks ago we had a moment of uncertainty, and we prefer to err on the side of caution. So that I can be able to report to you that the children you gave us to keep for you are being brought back in the same if not better condition.”

He also noted that of the 13 children that did not return on Friday with the 30 – two had aged out and two were placed with family members in Grand Bahama in December 2019.

The other nine, he said, are still at the Children’s Emergency Hostel because of their age group. “They are there until we can ensure the necessary housing and care,” Minister Campbell said. “I want you to know I will bring back the other nine in the same kind of condition.”

Mr Campbell commended all the persons and partners that have contributed to the home. He stressed the partnerships are very important.

“The government recognises and acknowledges that we cannot do it alone and we value all our partnerships, and we are in continued search of more partnerships,” he said.

He stated that the government appreciated the work of GB Port Authority and all local and international partners. He commended Sarah St George, of the GBPA for her continued support, the Kiwanis Club of Canada, Marjorie and Stephen Harvey, Family Guardian Insurance Company, and Spartan Builders for the quality of renovation work at the Home.

“This home stood as a beacon from 1977, and we heard the testimony of Peaches Feaster, a former resident of the home; she does not speak for herself she speaks for all children who are at this time success in the making,” he said.

Minister Campbell commended Sheila Johnson who is now retired, and urged newly appointed Home Administrator Pauline Bowen-Forbes to set an even higher standard for others to follow.

“You are not here to reinvent the wheel. You have received the baton, and you are to run your leg. You will improve on the efficiency and improve on the life experiences of our children so, when you hand the baton over to persons who take over from you, they will need to step up because the standard would have been set so high,” he said.

The minister was very pleased with the level of work and commitment of the staff at the Children’s Home and Social Services and called for a raise in salary.

“I know staff salary, DPM, their pay is some distance from their actual performance. They are performing above and beyond, and I am satisfied it has nothing to do with actual pay or they would not have been here. That said please give consideration as soon as we able to do something.”

“She has commenced pre-retirement. I thank you for your contributions throughout GB,” he said.

Deputy Prime Minister Peter Turnquest said staff at the home had done a commendable job caring for the children, many of whom are doing well and contributing to society.

“Certainly, we could never compensate you enough, but we will try. The minister (Campbell) has been very dogged about bringing equality to the compensation and career path for social workers and caregivers. We made some commitment in that regard, and hopefully, we will start to see the evidence of that as soon as we can get past this crisis, and that is the commitment of the minister and the government,” he said.

“I want to thank all those who contributed to this restoration project. It has been a labour of love for many of you. Your efforts have certainly paid off today,” he said.

You would think that they did this all themselves. Check out one of the Buildings and you will see that it was paid by a foreifn bank.

Trust the GBPA to make a claim off the backs of others.