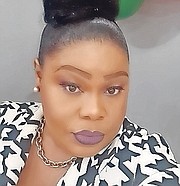 AS the nation grapples with fallout from COVID-19, another social ill – domestic violence – is said to be mushrooming out of control.

According to activist Khandi Gibson, she receives multiple calls daily from people enduring all forms of violence, especially in households where the weight of the economic downturn is heaviest.

The founder and president of the local advocacy group, Families of All Murder Victims (FOAM), told The Tribune yesterday the government needs to divert resources to assist victims of domestic violence.

She said with the onset of COVID-19, domestic violence continues to grow, affecting not only women, but also men.

Ms Gibson renewed calls for the creation of a gender-based violence unit at every police station on the island. The advocate said many times police are the first point of contact for victims, so it is logical that officers be trained to handle these kinds of incidents.

“I had a gentleman call me. He and his girlfriend were at it and he said it was a heated situation and that he needed me to come and get her,” the FOAM founder told The Tribune yesterday. “I had to call the police and the police sent a patrol car there to him.

“I thank God that he was able to reach out to me instead of it turning into a serious matter.

“Then we have females reaching out to me who are in domestic situations. One called saying the boyfriend was fighting her with the baby in her hand.

“But their main problem is they have nowhere to go.”

She continued: “On a daily basis I get these calls. There is only so much an NGO can do and the people don’t want to go to Social Services because of the time it takes when they go there.

“They come to a home thinking that we are superman or superwoman, but at this time I have to tell people I am so sorry that I have to refer them to Social Services.

Apart from the establishment of gender-based violence units at stations, Ms Gibson is also calling for transportation to remove victims from violent situations, a travel budget in cases of relocation and a COVID-19 testing allowance.

She also wants there to be a budget that allows victims to pay for housing for at least six weeks and for there to be follow-ups and an action plan for victims who have gone to the police. The plan would actively log the victim’s complaints and fears in the event alleged perpetrators attempt contact, commit further abuses or make threats.

“There should be a gender-based violence unit at every police station with trained certified officers. No one reached out to me in reference to that. I guess because it’s coming from me, it don’t make no sense, but if a white woman with blue eyes comes and says it then it’ll make plenty sense.

“This is needed and also Urban Renewal needs to be 24 hours.

“What have we done since the woman and her daughter were killed? Are we going to wait for the next victim?”

Ms Gibson was referring to the murder of Alicia Sawyer, 30, and her eight-year-old daughter Ednique Wallace in their Nassau Village home more than two weeks ago.

Police suspect the double killing came after a domestic dispute.

“We are lacking support for women who report incidents of domestic violence. We don’t have anyone to follow-up with victims to ask them if their alleged perpetrator has made contact with them since they reported the incident or whether they feel safe.

“Where is this process? No, we leave them alone and wait for them to come back complaining that they are still being abused.

“More needs to be done.”

It's a bit concerning that the gent called this lady and/or her organization and the result was a cop car was sent probably acting on the information that a woman was in trouble...

Unfortunately, this is just the tip of the iceberg as people suffer mental abuse in silence and most domestic violence is never reported. Situations will rapidly escalate as more and more individuals suffer financial strain, loss of social coping mechanism outlets, bleak future outlooks with no end in sight, and COVID fatigue.

Government was always deficient in this area. Their resources are now already stretched way beyond limits. No amount of training can prepare cops to deal with this new phenomenon especially since no one has been here before.

Ms. Gibson has some good ideas there. The challenge now is that money is tight. What should happen is the police should see what things they can do now to tackle this issue. Also, social services should look more into these matters. The church should also be stepping in here. Neighbors have to be neighbors too. It will take everybody to make an effort to chip in.

Money must not be too tight, as our “activist” friend is sporting $500 worth of hairdo, makeup and jewelry ... 🤣😎

So now the government has to spend resources trying to make people in relationships behave? Like they're children?

And just think how many school age children cooped up in their homes are experiencing domestic violence first hand just because our incompetent Minnis-led government has effectively shut down their ability to attend school and learn from a teacher in an actual classroom setting with their fellow classmates.

Our directionless, visionless, elitist, corrupt and uncaring PM has spent much to much time hobnobbing with his wealthy friends and unscrupulous cronies and foreign investors, to the point where he has become completely detached from the daily struggles and many hardships faced by the vast majority of Bahamians.

Correction, Violence is spiraling out of control, all forms of it. Gang violence, Domestic Violence, Violence against teachers, policemen, and civilian car accidents. The country is angry on the whole.

Minnis by his gross incompetence has personally created and is now stirring a boiling hot cauldron that is getting ready to blow up and rain down on all of us. It didn't have to be this way, even in the face of the current global pandemic. But the failed policies and decisions directly attributable to Minnis himself have greatly magnified and intensified the scourge of the deadly Communist China Virus on our nation and its people.

This is the collateral of bad copycat policy based on fear and panic....it’s what happens when one Metric - covid cases - is used to measure public health. Overdoses, crime, undetected cancer, a child’s life path and outcome are ignored supposedly to save a small minority of elderly sick people. On average 7 people die everyday in the Bahamas - covid has not changed that. Every life matters - so why is policy based on just covid as opposed to the Health of our whole of society.